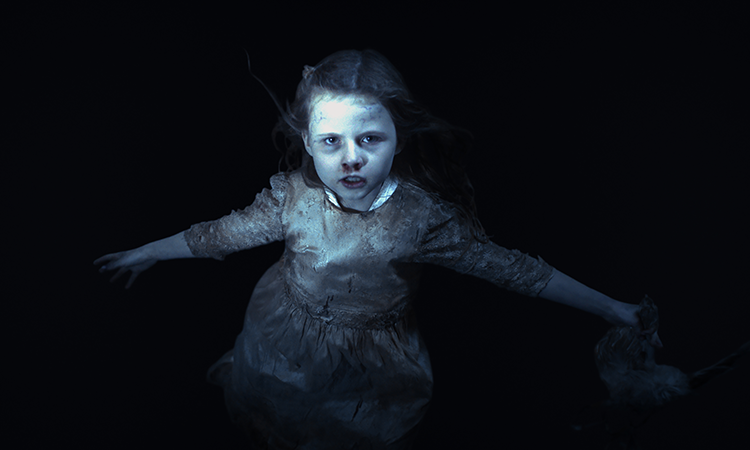 Written and directed by Ruth Platt, and expanded from her 2019 short film by the same name, Martyrs Lane tells the story of ten-year-old Leah (Kiera Thompson) who lives in a large, old vicarage with her family but can’t quite work out why her mother (Denise Gough) seems so distant.

At night she is visited by a mysterious guest (Sienna Sayer), who might be able to give her some answers. With a new challenge every night, Leah is rewarded with bits of knowledge that, when pieced together, threaten to shine a dangerous light on both the truth in her nightmares and of the world she lives in.

We spoke to Ruth Platt about exploring love and grief through a captivating, personal, ghost story…

When did you first get the idea for Martyrs Lane?

It’s tricky because it’s not an autobiographical story at all but the seed of the child being in this big old vicarage rattling around… I was that child. My parents were older parents, so my siblings were older and there were lots of people in the house because my dad was priest. So, that setting is definitely from my childhood and it can’t help but influence the film because when you’re writing from the viewpoint of a child, you’re using your memory as well as your own observations of children. So that setting came from my own life.

But there’s also other influences of the female gothic mystery tradition, the novels of the Brontes and Mary Shelley, and the ghost stories of Wilkie Collins and M.R. James, and the films of Guillermo Del Toro. So there’s an awful lot of sort of influences at play.

I’ve always loved the ghost story genre, and the horror genre and it started off a little bit more horror I guess and through development, it kind of went towards the ghost story end of the genre.

Why do you think it skewed towards a ghost story?

Across cultures, ghosts are metaphors for trauma and loss, and human emotions that we suppress or hide away. I always think they’re a bit like children. They just demand to be seen, and it’s like adults don’t want to see them, and it’s like our deepest fears, basically. So I’ve always been very interested in that metaphor, ghosts as a metaphor for something human.

I was creating this idea of a dysfunctional family dynamic and I was really trying to put myself in the eyes of that child – how she would articulate fragments of adult information that she’s getting and how she would articulate them and make them work for her. She’s a child that has very visceral, vivid nightmares, so ghosts kind of bled into that and into that world.

Martyrs Lane deals with a lot of heavy themes like loss and grief. What is it about genre that makes it a good platform to explore ideas like this?

I think they just tap into nightmares. I’ve always had very very extreme nightmares, always. Ever since I was a child. I know the things that come from your subconscious can shock you, they can be absolutely crazy!

Then, again, through all the literary traditions; Mary Shelley lost a child and then had a terrible night of nightmares and then wrote this extraordinary paradigm-shifting story of Frankenstein. I just think the horror genre allows us to tap into that subconscious, in the nightmares we experience, that is really all the stuff we suppress in our daytime conscious world to allow society to function and for us to function. It breaks all those rules. But it breaks them in a safe way because we’re not going out and doing terrible things but we’re articulating them through our imagination.

Actually I think it’s a form of therapy, just to be able to exercise all your fears and things that come into your head and you can put them out there and dissect them and explore them. I just think that’s very very important, very cathartic.

What kind of scares can we expect from Martyrs Lane?

It’s not an adult horror. So if you want horror, it’s probably not the film for you. I think it started off quite horror and then what I’d wanted to try to do is push those horror elements deeper into the fabric of the film so that they’re not overt but they’re simmering.

We tried to push the horror element into the subterranean cavernous areas of the film, rather than on the top. Because you’re seeing everything through the eyes of Leah, this ten-year-old child, you need to perceive it, but through a child’s eyes, it’s got to be a little bit delicate.

How did you go about building the tension in the movie?

It was a conscious effort because it’s very much keeping that arc, quite like a rope, keeping it quite tight and not peaking too soon because it’s a process of discovery; the whole film, and a little process of secular pilgrimage this little kid goes on, which actually leads to quite a dark place. But it’s a sacred place nonetheless – sort of finding a key into her mother’s heart. So because it’s got that arc of pursuits all the way to the end, you had to try and keep that tension quite tight. So hopefully that works.

Martyrs Lane has two young leads with Kiera Thompson and Sienna Sayer. How closely did you work with them in their roles?

I did work very closely with them but they also brought so much themselves. It was quite a long casting process, and it was all about finding these two children who could bring something really interesting and unique to the characters and to take that character on to the next step, from the page to physical reality.

It was also about the chemistry between these two because we saw some great actors [but] you’ve got to find two children who have real chemistry, a real connection, and these two really did. So we did a lot of casting of pairs and we found Kiera who has this very quiet strength, and she’s got that curiosity and emotional intelligence, and then Sienna [Sayer] just appeared with this incredible natural confidence and chic. We put them together and they just sang.

So I did work very closely with them just in terms of the spontaneity of each thought, taking any pressure from the performance and just working very naturally with them both and keeping it very physical and full of energy and alive. But a lot of it just came from them and their own ability.

Denise Gough is also fantastic as the mother. How far did you explore her character’s journey with grief with her?

Denise [Gough] is an amazing actress and she brings this incredible quality to the role. I think I sensed it was quite a private process for her so sometimes we did work together on scenes and other times I stepped back. But she brings such an extraordinary quality, it’s something that’s quite an intensive process for her. So sometimes I just stepped back to allow her to go through that and work through that. But what she does is so visceral and so complex and nuanced, it was just really great to have her in the film

What would you say are the main takeaways from the movie?

It’s a very specific story to a family but it also has very universal themes that we can all identify with, to do with family relationships, trauma, childhood, loss… So, even though it’s very specific in its focus on this one family, hopefully it’s something that people can identify with. I also think it’s a window into childhood. Because we see everything through Kiera’s eyes and her authenticity in that space is hopefully so powerful that I’m hoping it’s a window into childhood and it then gives us that window into our own backgrounds and experience…

Martyrs Lane is out now on Shudder.

Close Encounters of the Fifth Kind Official Trailer
Resident Evil: Welcome To Racoon City First Look
Doctor Who: Why Everybody’s Saying Lydia West is the New Doctor
How Star Wars: Ronin Brings the Saga Back to Its Roots
Halloween Kills: Where Does the Story Go From Here?
Back 4 Blood: Every Cleaner Ranked