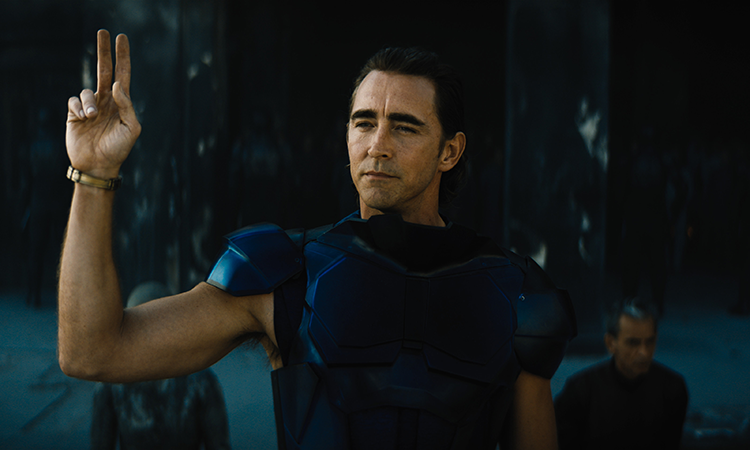 First appearing in a series of short stories in the 1940s, gathered together as Foundation in 1951 and launching a book series that lasted over 40 years, Isaac Asimov’s tales of humanity’s struggle against the collapse of civilisation have long fascinated readers but visual realisation remained until now a seemingly impossible dream.

Such an undertaking was certainly not for the fainthearted. Well-versed in working with existing properties (his repertoire includes The Crow, Blade, Batman and Superman), co-creator and executive producer David S Goyer nevertheless saw this project as the greatest challenge of his career.

“First of all, it’s considered the greatest science fiction work of all time… so there’s no pressure there!” Goyer laughs. “Asimov was the grandfather of science fiction. Even working with a character like Batman or Superman, at least there have been previous versions of something, there’s some kind of framework for the wider audience. For this show to work, it has to appeal to people that haven’t read the books, people that aren’t even necessarily fans of science fiction.

“There’s a reason why Foundation hasn’t been made over the last few decades. It’s been long regarded as notoriously hard to adapt. The story is supposed to unfold over 1,000 years. It’s anthological in nature. There are these big narrative leaps, very few characters continue on from one story to the next. They are brilliant books, but they’re books largely about ideas rather than characters or action. I myself was offered the opportunity to adapt it a few times as a feature, and I didn’t think it could be done as a feature, and I turned it down. It’s only now that I think the medium has matured with streaming, where we’ve seen some of these big novelistic shows that unfold over multiple seasons, that I think that the audience and the medium have matured to a point where I thought adapting Foundation would be possible.”

The visual register for the show is drawn from a diverse range of sources: “Cinematically, I would say it was David Lean, John Houston, Terrence Malick,” Goyer continues. “Certainly not anything from science fiction. We probably filmed 60% of the show on location, as opposed to on a set in front of a green screen. That was very important to me. I never wanted to feel sci-fi. I wanted to feel classic. I wanted to feel timeless. I wanted to feel lived in.

“I was very concerned with shapes and forms. So I would say, ‘just show me the silhouette of something first. I want to see the silhouette of the ship and see if I can, on a story level, understand what it is’. Because I want to understand its form first and then we’ll put all the filigree on. So I would say that we often look to the past much more than we look to the future. I didn’t want to reference what we thought might exist 25,000 years from now. I wanted it to feel ageless, timeless, classic.”

This approach to futurity also allowed for an open approach to the casting, although a couple of actors were on Goyer’s radar right from the start: “I had Lee Pace and Jared Harris in mind. It never happens that you get the person that you’re writing it for! I knew from the very beginning that we wanted to gender flip the roles of Gaal and Salvor [both men in Asimov’s stories], and that was something that I approached the Asimov estate with at the very beginning, to make sure that they were comfortable with that.

“I would say virtually every other character we cast gender or race blind completely. So that was freeing. The people that are watching this show are 70 years removed from the audience that would have been consuming Foundation in the late ’40s or early ’50s, so it was important to me that the show reflect the audience of today.’

In a lead role created for this adaptation, Lee Pace plays Brother Day, one of three clones of Emperor Cleon, alongside Terrence Mann as his elder Brother Dusk and Cassian Bilton as younger Brother Dawn. Pace has form when it comes to sci-fi and fantasy, memorably leading Bryan Fuller’s wonderful and much-missed Pushing Daisies, as well as playing Thranduil In the Hobbit films and Ronan the Accuser for Marvel.

“I’m a big fan of sci-fi, specifically this kind of sci-fi, speculative fiction about what happens to humans off-planet, which is very different than some of the genre stuff I’ve done in the past,” says Pace. ‘I think what Isaac Asimov comes to this with is a truly cerebral picture of what is a way to look at a human’s survival in our reality. He takes that reality off-planet and expands it throughout the entire Milky Way galaxy, and that’s the canvas we’re working with.

“Reading David Goyer’s scripts, I think he really solved the unfilmable elements of Foundation by creating some characters that have, in very different ways, figured out how to cheat death and take us through what could potentially be a 1,000-year story. If we’re lucky to get many more seasons, we might be able to tell that whole story!”

“What drew me really to this character is the riddle of him,” Pace continues. “It’s like this riddle of inherited power. We live on a planet where we have monarchies, and we have various ruling classes and stuff. There have been plenty of stories told about them, but it’s interesting to me to abstract that concept in this idea of a cloned emperor.

“When I think about this role that I play, I’m not really playing a man. I’m playing a series of men who for a time in their life are the emperor of the fucking galaxy. It’s an outrageous idea that they would have control over trillions of humans spread out through 10,000 planets through the whole galaxy. They’re the person who sits in that seat, and that person is a three-dimensional, complicated, flesh and blood, soft-skinned human.”

Beyond the complicated storyline which Goyer had to corral, the visual identity of the show also required a lot of thought: “One of the things that was really challenging about the show was we were trying to do an epic science fiction space opera,” he says. “For the mainstream audience, people that aren’t fans of science fiction, you’ve got these pillars of science fiction. You’ve got Star Trek, Star Wars, maybe a little bit of Alien. And most of their conception of how science fiction should look has been shaped by those two or three franchises. I was constantly having to push back and say, ‘That reminds me too much of Star Wars. We need to chart our own path. We need to make our holograms look different’. We need to have our spaceships function in a different way, which is why the Imperial ships have this donut hole that generates a singularity’.

This unique visual approach extends into the costumes, including a fantastic imperial outfit that Lee Pace dons: “I’ll be honest with you, they’re extraordinarily uncomfortable!” laughs Pace. “I’ve worn some uncomfortable costumes in my career. These are not nice. But half the time I’m wearing the robes and half the time I’m basically wearing really comfy sweats.

“When we’re off the thrones and in our own world, it’s the most comfortable costume I’ve ever worn. Kurt and Bart, who designed that costume, one of their inspirations was this small piece of Roman glass that had survived, I guess, 2,000 years, at least, if not older. It was a picture of this little, tiny vase, probably a little perfume bottle, and it was that blue opaque glass, and it looked like just about the most fragile thing I’ve ever seen.

“That they made the connection between that fragile piece of glass and this armour that looks imposing and powerful, I think really unlocks what the Empire that we’re trying to depict in Foundation really is.’

This meeting of distant past and distant future, with clear relevance to the present, marries nicely to David Goyer’s understanding of the core theme of Foundation.

Whilst he has spoken of hope being the key message, there is also a warning: “Look to the past,” he says, emphatically. ‘If we’re not careful, history is doomed to repeat itself. We can learn from our past mistakes. I say all the time – and  I didn’t coin the phrase – the best predictor of future behaviour is past behaviour. Nothing’s new. All of the challenges that society is encountering today, we’ve encountered before.

“That doesn’t mean that we won’t arrive at a new form of innovation, but history and humanity is cyclical’.

Foundation is out on Apple+ on 24 September

Close Encounters of the Fifth Kind Official Trailer
Pop Culture’s Least Scary Vampires
The Walking Dead Season 11 Episode 8 Review: For Blood
Doctor Who Series 13 is Titled ‘Flux’ and Starts On Halloween
The Batman May Be Even Darker Than the Trailer Suggests
Outlander Season 6 Trailer Gets Political, Teases Release Date