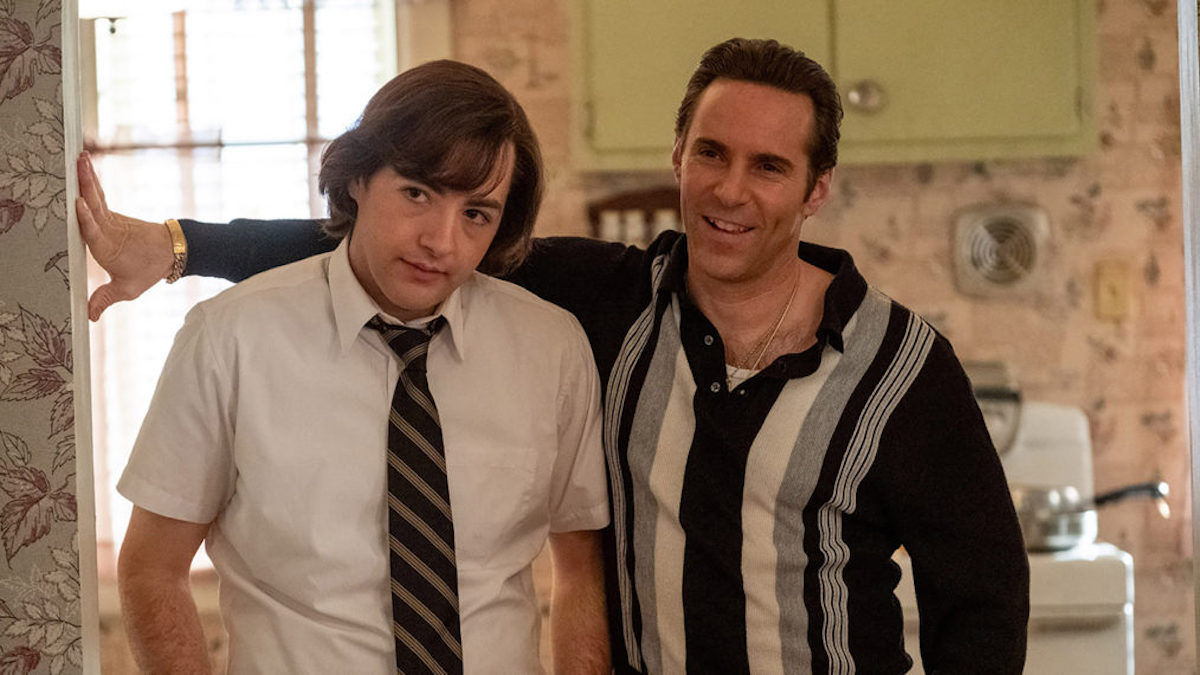 Oof, Madonna. It’s a good thing Tony Soprano came in at the end of this thing of theirs during the series, because it turns out the glory days of the New Jersey mob family were a mess. The lingering question at the end of the film shouldn’t be who killed the main character, but why didn’t Tony finish college. Director Alan Taylor’s The Many Saints of Newark is not really a standalone film. It requires a knowledge of The Sopranos. More than that, the series is a Dutch uncle to the movie, holding its hand a little too tightly, and afraid to let go.

The film opens on a jarring and unexpected note, which is reminiscent of the classic film Sunset Boulevard: It is narrated by a dead person. The character is a beloved figure in the series, his voice is unmistakable, and he will be born during the course of the film. Christopher Moltisanti, voiced by Michael Imperiole, is the last in a series of voices emanating from gravestones in a cemetery. David Chase, the creator of The Sopranos and co-author of the screenplay, revels in this kind of surrealistic twist. It is one of the things which divided fans of the series. It will do the same in the film because it is sometimes unintentionally funny.

The Sopranos was a family show, split between a crime family and a nuclear family always on the verge of detonation. Audiences loved that family and envisioned themselves leading that life. But the people who make up their backstory do not elicit this sympathy. Tony’s father, “Johnny Boy” Soprano (Jon Bernthal) performs an impossible task: He is so openly contrarian he provides sympathy for Tony’s mother, Livia (Vera Farmiga). Corrado “Junior” Soprano (Corey Stoll) is similarly too petty to warm to, and too conniving to turn our back on.

Directed by a series veteran in Taylor, The Many Saints of Newark is more Mean Streets than Godfather. It has an independent, low budget feel. It opens in 1967, when the Summer of Love was disrupted by the Newark riots, and is split largely between the Italian North Ward, and the Central Ward, which mainly housed African American working class families. The riots themselves offer cover for the Italian gang’s robberies, and allows the central character to get away with murder.

This is the story of the series’ mob legend, Dickie Moltisanti (Alessandro Nivola). The title comes from the name Moltisanti, which means “many saints” in Italian. Moltisanti is no saint though, even if he does spend the entire film trying to do a good deed. But he’s also not the drug addicted psychopath the series made him out to be. He only kills the ones he loves.

As Dickie, Nivola gives an extremely well-rounded performance. He is, at times, the sweetest person in the room and his affability is natural and completely believable. He looks like he’s the only person with the sense to find middle ground. But when he turns on his “Manson Lamps,” the anger and danger is palpable. Most of the time, he has an actor’s dream job where he keeps every secret internalized. Other times, he telegraphs his intent unmistakably. We know he’s going to make a play for his father’s young Italian wife, Guiseppina (Michela De Rossi) from the moment their eyes meet over dinner. Nivola also makes his conflicted feelings about young Tony obvious. He wants to save the kid, who he knows would be a natural in “this life.”

Tony is played as a boy by William Ludwig, and as a teenager by Michael Gandolfini, the son of the late James Gandolfini. Michael captures his father’s mannerisms and physicality. His Tony is a rebellious criminal wannabe who dreams of playing in the NFL, and yes, we get Junior’s line about him not having the stuff to be a varsity athlete. We also get a touch of psychiatry in the form of a guidance counselor who thinks young Tony has leadership qualities. Both of the actors playing young Tony bring a sense of uncertainty into the roles. Michael Gandolfini’s Tony is truly ambiguous. He actively looks like he’s trying to be good but has nothing to base it on. When he and his friends steal a Mr. Softee ice cream truck, he doesn’t even try to profit from it. He doles cones out for free to some kids in a park

The Many Saints of Newark doesn’t explain Tony Soprano. It doesn’t show how he became the boss of the family. He even forswears organized crime in its entirety during one embarrassing scene which would have fit better with his son’s character, AJ, in the series. Sopranos fans can take mania, depression, and panic attacks from the boy who would become the head of the Di Meo family, but not a hissy fit.

In a subliminal nod to the series, Ray Liotta fills the same function as Patsy and Philly Parisi on the series. He plays Dickie’s father Aldo “Hollywood Dick” Moltisanti and his father’s twin brother, who’s in prison for whacking a made man. Now he keeps to himself, listening to Miles Davis and imparting Zen counsel. “Pain comes from always wanting things,” he says. But what does he know? He’s a murderer.

While the plot works as a continuing story, it feels truncated. Chase and Lawrence Konner should have made one more pass at the screenplay before it was finalized. There are many specific plot points which had to be met during the film in order for it to fit into the history it is foretelling, and too many pieces had to be forced to bring the jigsaw puzzle together. The Many Saints of Newark is so tightly wedged into two hours, parts come across like a mid-season clip show. For those unfamiliar with the series, the story might be hard to follow. It skips through exposition, which longtime viewers are able to put together through osmosis. But even aspects of the central story are cut short.

The biggest holdover we get from The Sopranos is an open ending. It is Chase’s trademark. The Many Saints of Newark is begging for a sequel. The entire story is obviously not told. Dickie Moltisanti is not the man who “made” Tony Soprano.

The Many Saints of Newark will premiere on Sept. 22 at the Beacon Theatre to kick-off the Tribeca Fall Preview. The movie will be released in theaters and on HBO Max on Oct. 1.

Close Encounters of the Fifth Kind Official Trailer
Titane Review: A Fleshy Joyride
Dune Director Says Blade Runner 2049 Could Have Ruined His Career
Horror Movies That Should Get the Halloween Reboot Treatment
No Time to Die Box Office Opening Lowest for James Bond Since Casino Royale
Best Horror Movies on Netflix in October 2021