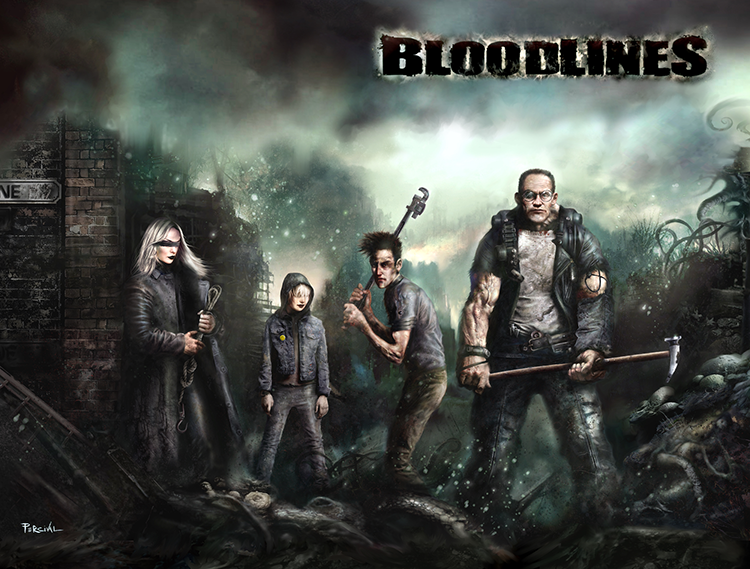 After successfully launching the $30 version of Nick Percival’s NFT-only graphic novel Bloodlines Vol. 1 last month, the date is now set for the auction of the Extended Directors Cut. So mark down 23 September in your calendars folks because this is the big one!

Watch the trailer for Bloodlines here and find out more about the author, the graphic novel and the auction below…

So, what is an NFT graphic novel?

As we reported earlier in the year, NFT marketplace Terra Virtua launched the world’s first NFT-only graphic novel with Bloodlines from award-winning British artist Nick Percival (Judge Dredd and Slaine). When we spoke to Nick earlier this year, he told us all about what an NFT is…

“NFTs (non-fungible tokens) are ‘one-of-a-kind’ assets in the digital world that can be bought and sold like anything else you own,” he explained. “Artwork (or in this case, the graphic novel) is ‘tokenised’ to create a digital certificate of ownership. A record of who owns what is stored on a shared ledger which is the blockchain. So, anyone that buys an edition of Bloodlines has it forever, can watch as it potentially increases in value and can trade or sell just like you can with any traditional comic book. It’s just another format of selling, buying and owning content, whether that’s comics, art, film, music, 3D collectibles and so on.”

What is Bloodlines Vol 1 about?

The Bloodlines series follows the journey of four characters as they fight to survive in a disorientating and bleak world, which sees human emotions take on physical forms such as fierce rage storms and sweeping floods of tears.

“[It] deals with a lot of themes I’d always wanted to explore – the effect of different emotions on people, the different moods we have and how they affect us,” Nick told us when we asked him about the graphic novel. “It got me thinking if these kind of things could be contagious, if we could somehow become ‘infected’ with different negative (or positive) emotions, character traits or feelings, just from being close to others and so on.

“The next task was to think about how to represent that visually in an interesting and dynamic way within the genre that I like to work in and in my own art style. Of course, it’s also comics, so it has to be cool and entertaining!”

What is the Extended Directors Cut of Bloodlines Vol.1 and what extra content do I get?

The Extended Directors Cut edition is not just a full-on, epic version of the entire journey that Nick Percival went on in creating Bloodlines but it also includes all teaser animations, created by Nick and all promotional material used in the run-up to launch.

On top of this, there’s a sneak peek of 1 page from Vol.2, a 1-2-1 video call with the man himself so you can ask him any questions and get an insight into his world.

Not only that but you’ll get to have a cameo in the next volume of bloodlines, meaning you will be forever immortalised in an NFT graphic novel, illustrated by Nick Percival!

This is also a completely unique edition – a single NFT – so no others are available.

Once bought, readers can access Bloodlines Vol 1. The Extended Directors Cut through their wallet on the TerraVirtua website

When is the auction for Bloodlines Vol 1. The Extended Directors Cut?

The auction will be taking place on 23 September 2021. Find out more at the Terra Virtual website here.

Will there be a starting bid?

The auction for Nick Percival’s Bloodlines Vol.1 Extended Directors Cut will be taking place on 23 September. Find out more here.