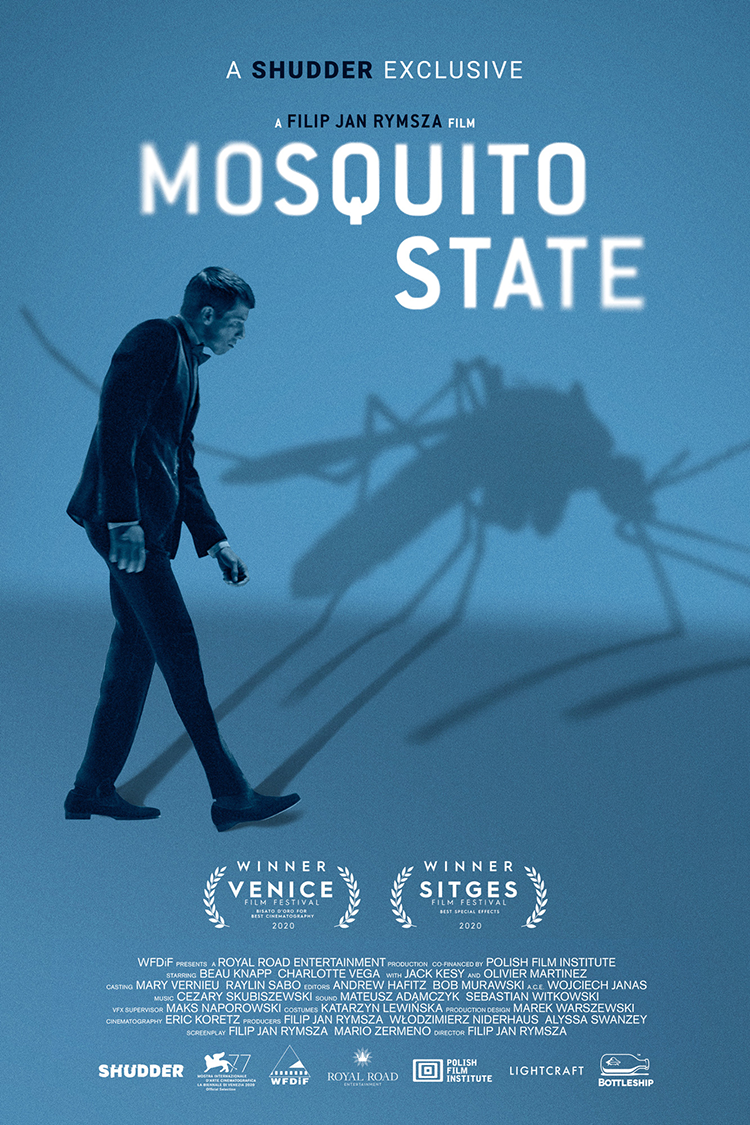 Richard is a ‘quant’, an intense data analyst, whose mathematical prowess can make the difference between a fortune and a flop. Consumed with his work, Richard doesn’t often stray from his office or apartment. But when Richard decides to go to a company party, hosted by his ruthless boss (Olivier Martinez), he makes two acquaintances: the mysterious Lena (Charlotte Vega) and one pesky mosquito, both of which take root in his mind, altering his existence and mind in profound ways.

From director Filip Jan Rymsza and co-written by Rymsza and Mario Zermeno, we spoke to Rymsza about how a real-life mosquito infestation inspired Mosquito State…

When did you first get the idea for Mosquito State?

It started with the idea of a person breeding mosquitoes in his flat. My friend Mario’s Zermeno is credited as the co-writer, and he had an experience similar to Richard’s in that his place was infested with mosquitoes. Mario shared this idea with me before there was really anything on a page, and I thought there was something to it. Then he wrote something which was more like an expressionist play. It wasn’t structured like any screenplay I’d ever seen, but there was something. There was an idea. I wanted to do something very contained, I was looking to do something that would be a character study and I came back to him saying: ‘You know what, if there’s something to this, I’d like to explore doing this as a screenplay.’ So I kind of took that initial burst of inspiration that he had and then I wrote the screenplay based on some of his experiences.

I was reading Flash Boys [A Wall Street Revolt by Michael Lewis] at the time, so all these things kind of coalesced. I loved this idea of Richard. It’s like everybody has some type of a strong relationship with mosquitoes, and outside of entomologists, you’re not going to meet anybody who has a fondness for that. To me, flipping that convention, finding a character who befriends the mosquitoes and communicates with them, and has this symbiotic relationship where they feed on him but he gets something back, emotionally, and studies them as a system.

So trying to figure out how that person is wired led me to finding and ultimately landing on a data analyst or quants, and when I was reading Flash Boys I was really struck by those particular characters. I dove into it and started talking to friends who were in similar fields and asking them their backgrounds. What are their interests outside of work, and how are they wired?

Why did you decide to set Mosquito State in 2007?

To me it was such a fascinating week in socio-economic history; the run up to the national conventions with the Republican-Democratic, then with Barry Bonds with the iPhone, and with Murdoch purchasing The Wall Street Journal etc.

It’s interesting, the way that we look back at recent history, and how it shaped our perspective. Especially for me, 2007 was a big year. I moved to LA. I was in San Francisco when the iPhone launched and so some of these things have really imprinted on me. So kind of going back into the time and you start to see why it was that we found ourselves where we did in 2018/19. I saw a lot of things rooted a decade earlier.

The movie depicts detailed renditions of mosquitos and their behaviours. How deep into research did you go for the movie?

Super deep! In terms of researching the genus of mosquito ultimately used. I brought euthanised mosquitoes in a jar to Warsaw, and that’s really what that genus of a mosquito looks like. It’s white and angelic and there’s something so beautiful to it. So yeah I definitely did a deep dive. There was an entomologist that I believe was from UC Davis, and I went down there with Eric [Koretz], the cinematographer and Alyssa [Swanzey], one of my producers and we went to a lab, we read and looked at the mosquitoes and all the stages. We did a couple of test shoots to figure out whether or not we would even be able to do all that macro photography [featured in the film] and that was really informative. That was early on.

Because I ended up shooting all the macro photography in post it informed the some of the visual aspects. I didn’t want to lean too heavily into VFX when it came to the macro world, but that’s how I saw it. I wanted those eggs to be giant as they’re coming out. I wanted them to also be in that macro sense to really get inside that world. So I came out of doing that research feeling pretty confident that if we invested the time into it and if we developed the tech then I’d be able to pull it off.

The mosquitos almost communicate with Richard via their swarm movements (which you can see in the trailer below), how did you create those scenes?

I wanted them to have a consciousness and the only way that the mosquitoes would be able to communicate with Richard, other than pitching them (with sound and having them buzz louder and quieter), was through movement. So I looked into birds and the way that they could move, and then it came down to communicating that with some of the VFX artists.

It was really one VFX house in Bulgaria, Bottleship, that had done bird movements. I talked to a friend who is a VFX whiz – I told him what I had in mind and he led me to them. They do what’s called fluid designs which is super complicated, very data heavy, but they had these programmes based on birds that they were able to apply to mosquitoes, and then we started working with the shape of it. [Then] slowly but surely you start to work within this 3D space and try to figure out what that movement is. I wanted it to be very elegant, I want it to be dance-like.

What do you want audiences to take away from the movie?

To me, I like when the interpretation is very local, and specific to the person. I never want to lead somebody in one particular direction. Those are the type of films that I watch and am inspired by, the ones where your investment results in a very particular interpretation…

Mosquito State is out now on Shudder.