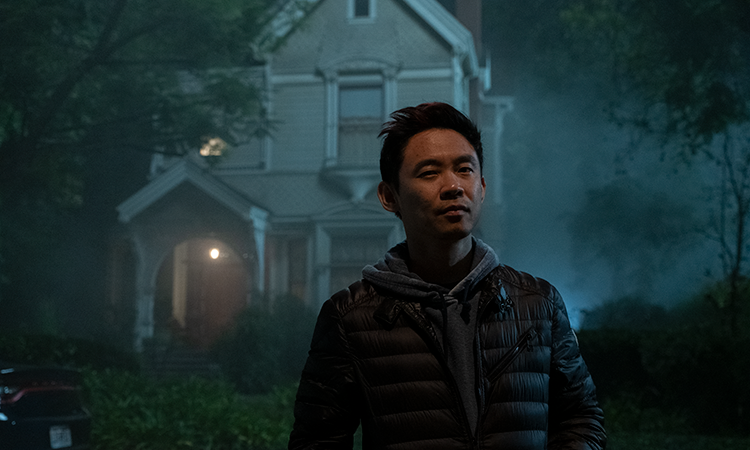 Malignant marks horror maestro James Wan’s tenth feature film, following his box office success with Aquaman and the Insidious and The Conjuring franchises. In between making the first and second Aquaman films, Wan snuck off to make an under-the-radar horror which he co-wrote with Akela Cooper and his life partner Ingrid Bisu.

After five years away from directing horror, he’s making a return to his roots with a giallo-inspired, Eighites serial killer throwback with shades of Brian De Palma, Dario Argento and Mario Bava.

We spoke to Wan about his return to horror with Malignant…

Eyes of Laura Mars partly inspired Malignant, what was it about that film that struck a chord with you and how did it inform how you approached Malignant?

One of the things I wanted to do was hark back to… there was a particular style of late-Eighties and early-Nineties serial killer stories. It’s that subgenre where you follow the victim or the main character and you follow them through the eyes of the murderer. It’s pretty amazing that it was a genre in its own right.

In that period of time, it was pretty overdone, and I just thought, ‘that’s something really cool that I grew up with, and I really enjoyed it back then and no one really makes anything like that anymore’. So I thought it would be fun to go back to something we’re really familiar with and do my own thing to it, which is to completely flip it on its head. I use that as a starting point for inspiration and then I see where it takes me.

Can you tell us about the look and design of Gabriel, who seems to be some sort of wicked imaginary friend going by the trailer (below). How did you come up with the look and image?

Gabriel is a bit of an enigma character in Madison’s life. I wanted to create a character who you’re not quite sure if he or she is necessarily real, like a real person. Is it an imaginary friend, is it a ghost, or is it the devil? I had to find a way to hide its form. A lot of that stemmed from an idea of trying to hide its form and what it is.

It was a challenge to work out how to create something with a strong presence but yet you can’t really see it most of the time. A lot of the time, he’s just described in the script as a silhouette, a shape, a shadow. When it comes time to shoot it, you don’t quite know what that represents.

Did you have an imaginary friend growing up?

No… to blame my wickedness on? Sadly not! I have no one to blame but myself!

Can you tell us more about the screenwriting process with your co-writers, focusing on the main character Madison (Annabelle Wallis) and how you created her?

I should say, the theme of the movie or one of the themes of the movie is about that sisterly, sibling connection we have, and how close we are. If we’re not necessarily blood-related or adopted – does it mean we don’t have as strong a connection with someone? Or is it the other way around? That it doesn’t really matter whether you’re blood-related or not if you grew up together. It was just one of the themes that we wanted to play with. We felt that it tied nicely to Madison’s journey… she’s trying to discover who she is by finding out where she belongs in this world. Obviously, a lot of that stems from your childhood and the connections you have growing up.

Did Annabelle Wallis say what attracted her to the role, or had you written it with her in mind?

She was attracted to the role due to the sisterly aspect of the story, and also playing a woman who’s trying to overcome a lot of things. At the start of the film she has a bit of a… she comes from a broken home, so to speak, and she’s trying to deal with that, and a horrible husband, and she’s had miscarriages a bunch of times in the past.

She’s really beaten down by all these life situations that were thrown at her. I think Annabelle thought that there was a lot in there for her to chew on, and for her to dive into. On top of that, it’s also a genre film so you get to have a lot of fun with all the crazy stuff that comes along with that!

The poster is giving off big Giallo vibes. Can you tell us more about that aspect of the film, and why you wanted to make this film now?

I’m a big fan of Italian horror films, and Italian pop culture just in general. Whenever I make a big movie, I want to go back and do something smaller and more intimate. And whenever I’ve done that small movie, I want to go back and make a big movie on a big scale with lots of toys to play with. Coming right off the first Aquaman, I just wanted to go back to my roots and do a small horror film that isn’t based on any existing IPs, so that I could make it under the radar between Aquaman one and Aquaman two – which I’m shooting right now in the UK.

I wanted a bit of a palette cleanser. I can’t make two movies that are in the same world back to back, I have to take a break. I thought, why not go back and do a down and dirty, pretty shocking little thriller as something to buffer me?

To us, Giallo is the original ASMR, so can we expect lots of heavy breathing in the sound design? Will the soundtrack fit the classic Giallo mould?

The sound effects and sound design are generally a big part of my films, especially with my horror movies. I’ve also said, you can show very little but your sound design needs to be the thing that creates the imagery. Even if I’m not seeing it, the sound design, the score and the music creates imagery in my head that allows me to project what I think I’m seeing in the darkness or in the shadows. I’ve always held it in a very high regard and it’s no different in this. The killer in this movie speaks with a static, electronically broken voice…

Malignant is in cinemas from 10 September.