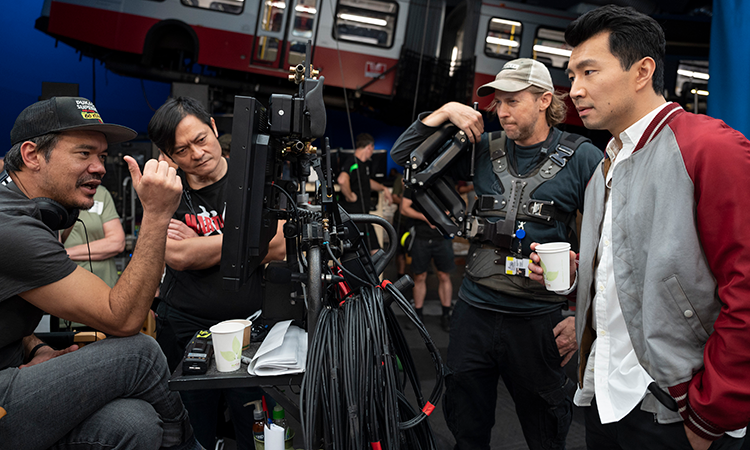 “I think it really is a story about a boy and his father, and about this tragedy that has shattered a family,” Simu Liu tells us of his new movie Shang-Chi And The Legend Of The Ten Rings. “It’s really a story about grief and how a family deals with grief and loss. It’s got a lot of heart.

“But, of course, it’s also got some of the best action sequences that you’ll ever see in the MCU!”

Liu plays the boy in question, Shang-Chi, who thought he’d left his past behind him before he’s violently forced back into the situation via an epic fight on a moving bus (we’ll get to that bit later).

Based on the comic book character created by writer Steve Englehart and artist Jim Starlin, it’s this relationship between Shang-Chi and his father, Wenwu, that the movie’s director, Destin Daniel Cretton really wanted to make sure transitioned over from the source material.

“The parts from the comics that we definitely wanted to cling to was the relationship between the father and son. We knew we wanted to update it in a way in our movie that grounded it in a more realistic father-son relationship with all the conflict that’s there,” Cretton tells us. “But we didn’t want to lose sight of Wenwu, Shang Chi’s father in our movie. Of Wenwu’s love for his kids. It’s a warped love. It’s a broken love and it gets dark sometimes but that’s something that we didn’t want to forget.”

The character of Shang-Chi debuted in Special Marvel Edition #15 back in December 1973 in the Bronze Age of Comic Books. Creating a movie based around a comic book character that debuted almost 50 years ago, Cretton and the writing team at Marvel wanted to update some of the ideas within the original source material without deferring too much from its themes: “I initially wrote the story alongside one of our co-writers, Dave Callaham who is Chinese American, and it was a big combination of going through the comics, and seeing what we wanted to update, see what type of characters we wanted to round out.

“We knew from the get-go that we wanted to break every stereotype that we could in this, and that to me started from tapping into our own experience, our own upbringing as Asian Americans and infusing some of that into the story.”

Though adapting a decades-old comic for modern day audiences may be a daunting task, Cretton had fun gathering together a plethora of influences to incorporate in his film. “We pulled from a lot of references. At Marvel, you kind of get your own little conference writing room, and we just plastered the walls with visuals from our favourite martial arts movies and fantasy movies and wuxia movies and things from the comics that we were into exploring. It’s actually a very fun creative process where there’s just ideas flying around everywhere and you just grab them and start figuring out how you can piece them into a story!”

The story that’s resulted from that hallowed Marvel conference room focusses on ‘Shaun’ a mild-mannered valet whose biggest concern is how many drinks and songs he can squeeze into a night’s karaoke session with his best friend Katy.

Just kidding, Shaun is actually Shang-Chi (yep, as Katy notes, it’s the worst alter ego name ever), a kung-fu master who has been trained from birth to be an assassin by his father, the leader of the nefarious Ten Rings organisation.

After a tragedy in his childhood and being unable to take part in some of the questionable deeds as part of his father’s organisation as a teenager, Shang-Chi runs away from his home of Macau to San Francisco and starts a new life. But his past doesn’t stay hidden for long…

“This movie is about our main character learning how to deal with pain, and learning not only how to redefine it for himself, but he’s learning that ignoring it doesn’t really help,” Cretton says. “Facing it and repurposing that pain to actually become his superpower is a theme that I really relate to. I hope it is something that a new generation of fans and kids can carry with them.”

Both Cretton and Liu knew that to focus the movie on this complex character meant some digging into who Shang-Chi really is: “What I really loved about working with Destin is we started from a place of humanity and kind of built outwards from there, before all the superhero stuff, before all the spectacle and the martial arts and the action,” Liu says. “As an actor that becomes the entry point to the character and then we build the other pieces of that character as layers.”

A huge part of Shang-Chi’s life in San Francisco is his relationship with his best friend Katy, who has no idea her friend ‘Shaun’ is secretly a badass trained assassin. ”Katy is a really fun character,” says Awkwafina who plays her. “She has a sense of humour, very similar to mine. She’s impulsive, she’s a little crazy, but I think at the same time she is a really grounded and loyal friend to Shang-Chi. I think that their friendship means a lot to her.”

That friendship is really put to the test when Shang-Chi’s past catches up with him in a violent way when he’s attacked while they’re riding home on the bus. This scene (which you can see in the trailer here) is not only a turning point in the movie, it also sees Awkwafina taking on a few action moments of her own when Katy is forced to drive the bus while an epic, if claustrophobic, fight is happening behind her: “I definitely wanted to make sure that it looked like I relatively knew what I was doing and I think I definitely got there,” she laughs. “I was on the race track. I took driving lessons just to get the feel of the movement!”

Speaking of epic fight sequences, Liu really had his work cut out for him when taking on that element of Shang-Chi’s character: “Shang-Chi wouldn’t be who he is without the incredible martial arts skills. He’s trained by his father, Wenwu from such an early age to be an assassin so there was a physicality that I knew that I had to get to,” he tells us. “[There was] just lots of stunt training – like three to six hours a day working among the stunt team. It was kind of like: ‘Day 47, I am still among the stunt team. I’m trying to blend in’ [laughs]. Thankfully they were kind enough to just include me in their regiment.

“Then I would do an hour/an hour and a half of strength and conditioning five times a week making sure that I had the quote unquote ‘Marvel body’. You know, the body that is so iconic for all Marvel superheroes. I feel like it’s a rite of passage for so many of us.

“Then the second part is just to build up the endurance to be able to shoot this monster of a movie. I mean if an actual human being had gone through what Shang-Chi goes through in the first 45 minutes of the movie, he would be dead! He would at the very least be in the hospital recuperating in some sort of a coma because it’s a lot. Obviously, we play with heightened reality in the Marvel Universe, even for characters without superpowers, but it’s really tough stuff and he’s doing a lot!”

Speaking of the Marvel Universe, Shang-Chi And The Legend Of The Ten Rings takes place after Avengers: Endgame which [spoilers] see many of our established characters taking a back seat for the new generation of heroes and this latest movie from Marvel is making sure it makes its mark in the MCU: “It’s a unique movie within the MCU,” Liu nods. “I think it’s first of all very culturally significant. It’s a celebration of Asian-ness, of our culture, and even for those outside of our community. I think it’s just such a wonderful way to share in those beautiful visuals and the language and so many other things.”

“I think it really is the first of its kind in that [Shang-Chi] is the first Asian superhero of the MCU,” Awkwafina adds. “You have a body of stories that are of a different context, [from] a different kind of voice. But it’s also an origin story so I think that there are just themes that are going on that I haven’t seen in really any movie.”

For Cretton, ushering a new generation of Marvel heroes and stories was something he took seriously and is happy to pave the way for more superheroes to come: “I think you can see by the end of this movie that there is a clear direction that the franchise is headed. But I also know that with every new streaming show that’s coming out and all the new characters that are being introduced into this new phase, the emphasis on character and relatable, flawed superheroes that we’ve come to love since the first Iron Man, is always going to remain consistent. That to me is the magic of the MCU.”

Another big part of that MCU magic is the spectacle and immersive experience audiences have when watching their heroes kick butt and save the world, and you should expect the same with its latest addition.

“I hope [audiences] go through a whole roller coaster of emotions,” Awkwafina enthuses. “That essentially they have fun and maybe that they’re affected, they’re impacted. And that they just remember what it’s like to have this kind of very special experience at the movies.”

“I hope that people who experience this movie are experiencing something new and fresh and that they leave with a little boost of joy and, hopefully, a bit of hope,” Cretton agrees. “We’ve all been through a lot in the last couple of years and this movie is a celebration of culture. It’s a celebration of the MCU and entering a new phase in the MCU. I hope people just have a really good time.”

We’re sure they will!

Shang-Chi And The Legend Of The Ten Rings is released in cinemas on 3 September.