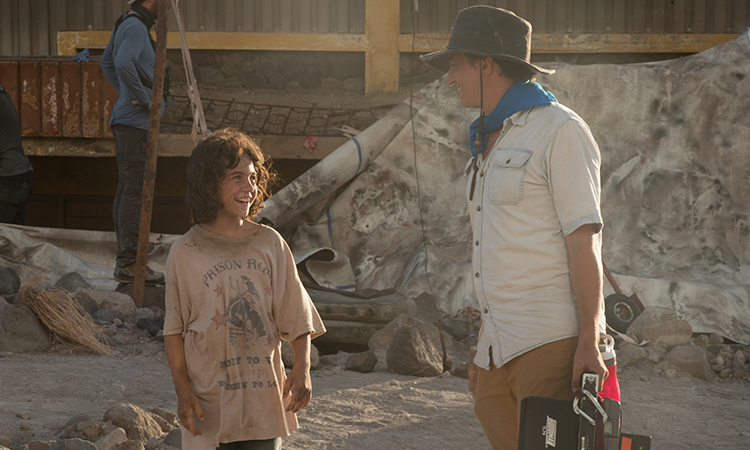 The classic story of Peter Pan is wildly reimagined in writer/director Benh Zeitlin’s ragtag epic, Wendy, starring a brilliant cast of young actors and written with his sister Eliza Zeitlin.

Wendy takes place on a mysterious island where aging and time have come unglued, where young Wendy Darling (Devin France, pictured above with Benh Zeitlin) must fight to save her family, her freedom, and the joyous spirit of youth from the deadly peril of growing up.

When did you first get the idea for Wendy?

The reality is, I don’t remember a time before Peter in my life. And really my sister too, who I wrote this film with and who was very much my partner in crime creating this.

For our whole lives we always sort of wrestled with this character. [We didn’t have] a particular version of the story, we just really believed that Peter was out there, saving children from growing up. If we were wild enough, we thought that surely he was going to come for us.

He definitely did not, so we grew up, and were like, ‘fuck it, we’re gonna go find him and live this adventure whether or not he wants us to!’ Go to Neverland, meet the Lost Boys, sail the boats, climb the volcanoes, meet the mermaid and all this stuff.

Wendy is very much a film about growing up but also our answer to growing up was to really go on this adventure and make this film in a way that we got to live out all of these dreams that we imagined as children and do them in real life.

We weren’t going to build it inside of a computer, we were really going to go out and do it. We had this opportunity to make a film like that no one would ever let you make under normal circumstances. We’d always imagined making the film at some point in our lives and we had this incredible opportunity on the heels of Beasts [Of The Southern Wild]. This was our chance and that’s what we did.

How did that initial idea turn into the film?

It was a many-tiered process. There are so many things in this text historically that are just absolutely horrific; the way that Peter Pan represents girls, the way that it represents the Indians…

There’s a core idea inside of Peter that is truly universal. There’s a reason why this character has stuck around and why everyone has this sense of who he is and what he represents. It really has nothing to do with a lot of the milieu around the story and a lot of it, particularly for Eliza, was just super damaging. To look at this character that she idolised, who represented freedom, fun and adventure, and then within the same story to have it be very clearly saying that adventure is for little boys, not for little girls.

We really wanted to reinvent this story in a way that everyone had access to it without feeling pushed out of it and insulted by it. So there were things that we wanted to take out of the myth.

We also really wanted to create a version of that story that didn’t feel like it existed in a fantasy world. You learn very quickly in life that you can’t fly but what would flying be like? Jumping on top of a freight train, that would be the same feeling. What is like a fountain of youth? A volcano… Anyone can watch this film and feel like, ‘what if I wanted to run away from my life and go to Neverland?’ This is how I would do it. So that was another fundamental building block.

Then once we had created that framework of the mythology, a lot of it became about going out and actually looking for these things and translating the story through the people that we cast, who became huge inspirations for who the characters were. [Also] translating it through the actual locations. The island of Montserrat really became part of the inspiration for Neverland and so going to that place and revising the story to sit with the mythology that is implied by the island and the locations that we found there. That became a years-long process of exploring and having [the film] speak through real elements that we were able to find as we were developing it.

Why focus on the character of Wendy in the movie?

Stories are generally about people who change and we think of this as a story about Peter Pan, but Peter Pan never changes. When you really look at the story, it is about Wendy, and to us the most interesting questions in the film have to do with questions that really live in Wendy. I think, historically, she’s such a passive, inactive character that it doesn’t particularly show up that way. But for us, the most important question of the film was not ‘what is it like to live in Neverland?’ it was ‘what is it like to have to leave Neverland?’.

There’s a universal experience that we all have of having to leave our childhood behind. It can be incredibly painful and sad and it can haunt us our whole lives. There’s this story that we tell ourselves about growing that we were trying to address. Where it’s like ‘the best time of your life and all the good stuff happened when I was a kid. Then I sacrificed myself for my children, for my work. I got older and weaker…’ It’s a horrible story and Wendy is faced with that story. Really, Peter tells that story. Peter has always symbolised the idea that freedom and fun will never be as free or as fun as it was when you were a kid. You have to trade that in for your family, for your life and your job.

So Wendy is up against that sort of oppressive structure and has to figure out how to leave Neverland, and carry that with her, and reshape that to grow up but not to lose who she is, her wildness. So we felt like the most essential things we wanted to say about these themes and ideas really lived in her character. That was really how the film snapped into place, when we realised that it was about Wendy. Then we could tear the old Wendy out of the book and replace her with someone that was three-dimensional and hopefully strong, inspiring and active. That set us in motion. It’s like ‘okay, the reason to make this film is to celebrate this character and revise who she is inside of this myth’.

How would you describe Wendy?

We were trying to make something that doesn’t fit inside of any kind of box. I love genre films, and I grew up on these huge adventure stories that we were getting [at the time]. My VHS collection as a kid in the Nineties was like, Willow, Never Ending Story, E.T… these big tentpole blockbusters.

Trying to figure out how to get those two things to sit together in the same film kind of unravels the genre of both of them. I’ve always wanted films to feel incredibly accessible, to be things that anyone, in any place, at any age can understand, but to also express character in a way that is more complicated, more three-dimensional then oftentimes those forms allow for. So the movie sort of sits in a liminal space between some of those ideas…

What do you want audiences to take away from Wendy?

I think that the film can speak to children that are looking towards this story and also to adults that are inside of it. I hope this film inspires people to question that story and realise that we don’t have to trade in our youth to grow up. We don’t have to trade in our joy, our freedom, our wildness and our imagination, in order to have all the beautiful things that children don’t get to experience.

Wendy will be released in cinemas on 13 August.

Close Encounters of the Fifth Kind Official Trailer
The Pressures of The Walking Dead’s Final Season
Doctor Who Series 13 is Titled ‘Flux’ and Starts On Halloween
Lamb Ending Explained with Noomi Rapace
SCI-FI-LONDON 2021: What to expect and full programme
The Walking Dead Season 11 Episode 8 Review: For Blood