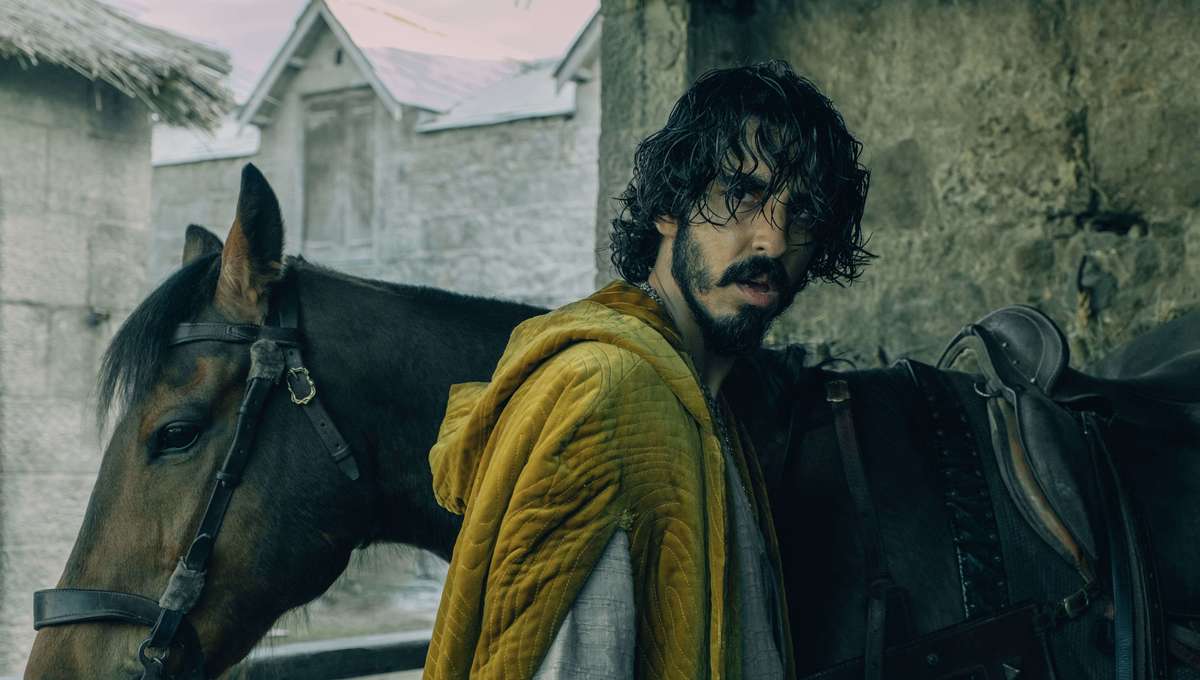 The Green Knight is the realization of a vision David Lowery first had at eight years old. Sort of. As the Arthurian A24 film reaches U.S. cinemas this week, it makes good on an obsession that began when Lowery saw Indiana Jones and the Last Crusade in theaters, and which stayed with him in various forms for more than 30 years: First as childhood fancy, and now as the most striking adaptation of Sir Gawain and the Green Knight ever committed to film.

“The Grail Knight in The Last Crusade opened the door to all of this for me,” Lowery says during a Zoom chat. “The very first script I ever wrote was when I was about eight, and it was actually a play and it was about Sir Perceval and his Grail quest.” So while Sir Gawain and the Green Knight came later, the idea of telling the story about King Arthur and the Knights of the Round Table, and especially of a knight experiencing the horrors and wonders of the wilderness outside Camelot, was always there.

It was during a freshman year at college, then, that the aspiring filmmaker really encountered the 14th century epic poem about King Arthur’s nephew and his quest to find the Green Knight. It’s a sordid tale that plays with expectations and honorable words after Gawain is tricked into decapitating the emerald cavalier, only for the undead foe to then lift his severed head off the ground so it can taunt Gawain that they’ll meet again in one year’s time.

Says Lowery, “We read The Iliad, The Odyssey, Beowulf, and ultimately we wound up with Sir Gawain and the Green Knight. So by the time I got to it, I was sort of ancient poetry’d out, so to speak. But nonetheless, it stuck with me. It really stuck with me. And when I had this fleeting idea of making a movie about a knight on a quest a couple of years ago, I just thought, ‘Well maybe I can use Sir Gawain and the Green Knight as a template.’” But on revisiting the poem as an adult, it became something else entirely, morphing into this week’s near hallucinatory interpretation of medieval values.

“The quest in and of itself is about a knight journeying towards his inevitable death,” Lowery explains. “And there was something about that which was always appealing to me… And it quickly became not just the template. I became obsessed, to put it mildly, with the work itself and really wanted to make a movie that did it justice or at least scratched the surface of it.” The filmmaker even adds in a confessional tone that the project has “consumed my life for a couple of years. I don’t think I’ve ever cared as much about doing justice to the source material as I have with this one.”

A big facet of paying that fealty is in the cast Lowery assembled to tell his faithful, yet quietly deconstructionist version of The Green Knight saga. There’s Ralph Ineson buried under layers of prosthetics and makeup as the titular Green Knight—who arrives at King Arthur’s feast on Christmas Day to demand one of the king’s men play a game. Sean Harris is also on hand to play a more enfeebled Arthur than some audiences might be used to, as well as the invaluable Kate Dickie as Guinevere. And yet, the most crucial casting of all is of course Dev Patel, who breathes fresh life into Gawain for a 21st century audience.

An Oscar-nominated actor best known for his work in Slumdog Millionaire, Lion, and Hotel Mumbai, among others, Patel is a natural leading man whose charisma is nigh overwhelming in the role of Gawain. It’s a tremendous performance from a young actor whose first brush with King Arthur was Monty Python. Alongside Lowery, Patel makes constantly intelligent and humane choices while inhabiting the character, including leaning into Gawain’s anxiousness. Lowery only heightened that last element by changing Gawain from being a knight to a knight-aspirant, and one with even more conflict in his heart.

“I think he is definitely a flawed individual,” Patel tells us. “He’s spoiled and at the same time, I think there’s a deep insecurity there, which I could relate to. The idea of not belonging, this kind of imposter syndrome amongst the Knights of the Round Table, that’s what I liked: David stripping him of his knighthood and making him the dark horse, the runt of the litter in a way. He’s King Arthur’s young nephew, so he wants to feel worthy.”

When it comes to reframing Gawain and his quest, as well as ambiguously toying with elements such as the motivations of a mysterious lord and lady of a manor Gawain encounters on his travails—played cryptically by Alicia Vikander and Joel Edgerton in the film—Lowery believes he is offering his modest contribution to Arthurian tradition.

“There are all these different interpretations of the characters,” says the writer-director. “Whether you go with the Post-Vulgate Cycle or Le Mort d’Arthur, or whatever you want to go with in terms of the canon of Arthurian lore, there are all these differences, all of these different readings and variations of the characters. And that in a way gives us permission to introduce yet one more variation. In the original text Gawain was indeed a virtuous knight. He was one of the most virtuous of all the knights of Arthur’s Round Table. And yet, he still is fallible. He still was wrestling with the foibles of humanity, and that’s what the original poem is all about.”

For Lowery, The Green Knight and its source material is the journey of a character in search of his own integrity. In that way, Lowery and Patel are also finding a modern articulation of the chivalric code, which dictated late Middle Ages fiction, if not necessarily real lives. There’s an irony in that though since, as Lowery notes, this is the story about a man searching for his death. So when I ask if he thinks the chivalric code is inherently flawed or doomed, the director laughs and then sits back for a moment.

“Doomed, maybe,” Lowery considers. “I don’t think it holds sway today, nor should it, in the way that it did when the poem was written. But the underlying tenets of it—of honor and respect—are certainly ones which we would do well to keep in mind today, as we comport ourselves in modern culture. I think that it has changed its hue, but I think it’s more worthy of consideration now than it ever has been, especially in 2021. I think a modern definition of chivalry would be more complex than in the 14th century, but complex in a strong and valuable way.”

Patel’s Gawain attempts to find that value when The Green Knight opens on Friday, July 30.

Close Encounters of the Fifth Kind Official Trailer
Prisoners Of The Ghostland: Nicolas Cage and Sofia Boutella team up in exclusive clip
15 Best PlayStation One RPGs Ever Made
The Humans: Family tensions rise in A24 horror drama
Supergirl’s Azie Tesfai Takes on Race and Privilege as Guardian, Episode Writer
Why Star Wars Trilogy Editor Marcia Lucas Hates the Sequels