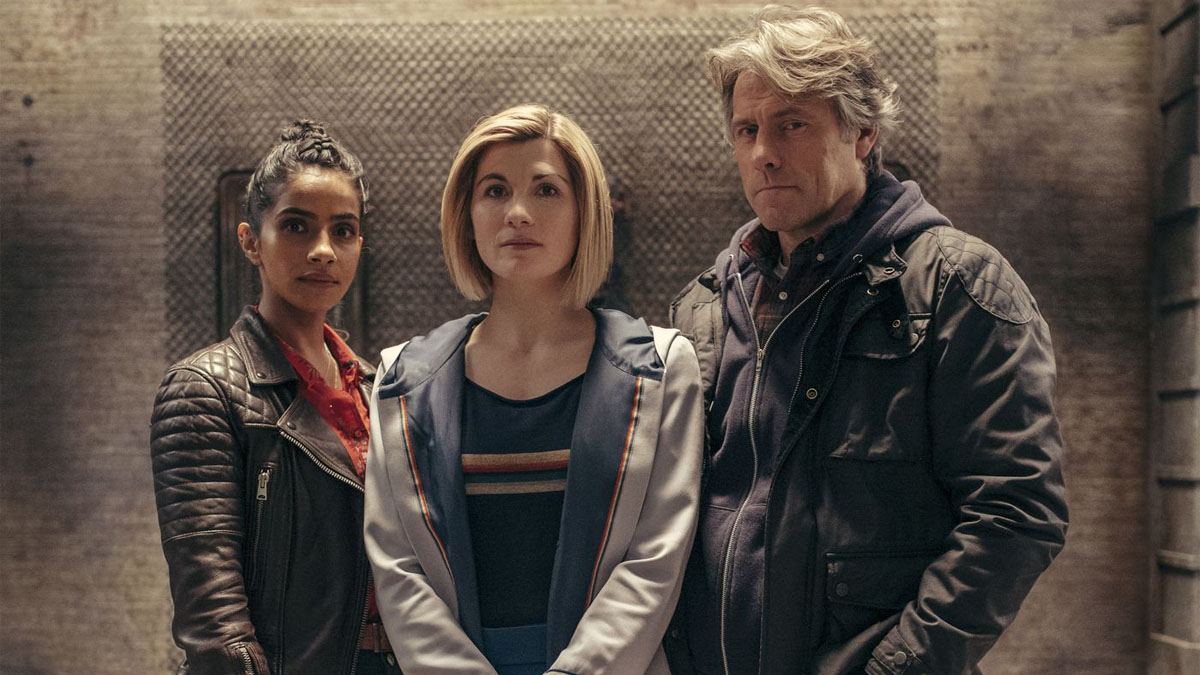 At this weekend’s Comic-Con@Home virtual Doctor Who panel, showrunner Chris Chibnall was asked for one word to describe the next series, and he said ‘swarm’.

Chibnall – and there’s a joke here in the comments section if you want it – knows exactly what he’s doing. So, most obvious idea first: is Chris Chibnall, embarking on a series that consists of an eight-episode long story, bringing back the Swarm from ‘The Invisible Enemy’?

This Season 15 story from 1977 featured a parasitic virus taking over victims through their eyes. The Swarm are mostly remembered for the character of the Nucleus of the Swarm, who resembled a hybrid of living prawn and cooked/peeled prawn, and the story is not thought of especially well (though it did introduce K9).

However, the concept of an intelligent, sentient parasite taking over characters has dramatic potential. Doctor Who has done similar stories before (‘Fury from the Deep’, for example) but rarely has it really leaned into paranoia and double crossing. The Doctor and Yaz are technically the established characters this time around, with John Bishop’s Dan and Jacob Anderson’s just-announced Vinder the newcomers who may not be trustworthy. Something like Invasion of the Body Snatchers or The Thing through a Doctor Who filter could work very well if the characters are well realised, and paranoia mounts in the face of a significant threat.

What Chibnall knows full well, though, is that most fans who know who the Swarm are would absolutely not be expecting them to return to Doctor Who. He is banking on that level of doubt to let fans wonder ‘Would he actually do this?’

Personally, I believe Chibnall absolutely would bring back the Swarm. It’s unexpected, as even with this tease no one is going to think he actually would do it. Hell, he’ll probably reveal the Timeless Child was Part Swarm.

There are a few possible alternatives. Firstly: something brand new that’s impossible to predict (e.g. Skithra revenge fleets, the Master and the Cyber Lords get melded together, an evil version of W.A.S.P from Stingray). It’s probably going to be that really isn’t it?

Secondly: a return to the Leisure Hive (from ‘The Leisure Hive’) based purely on the connective tissue between the words ‘Hive’ and ‘Swarm’.

Thirdly: any remotely insectoid species previously seen in the show could return as a swarm: the Wirrn from ‘The Ark in Space’ (which are similar to the Alien from the film Alien – except giant wasps), the Vespiforms from ‘The Unicorn and the Wasp’,  the Zarbi and/or Menoptera from ‘The Web Planet’, the Malmooth from ‘Utopia’, the Metatraxi from the lost stories of Season 27, or possibly just all the bees that disappeared in Series 4. Maybe Goronwy’s bees from ‘Delta and the Bannermen’.

Most of these are unlikely to reappear. The Metatraxi have only appeared in spin off media, the Wirrn are a great horror monster but nothing about them suggests they could sustain an eight-part story, and the Vespiforms only really made sense in a comedy context. The most likely candidates from this list are the Malmooth, who had a huge civilisation at one point and are relatively unexplored (with Chantho the only one we see on screen) and the Zarbi or Menoptera. So far the Chibnall era has given us no tonal indication that it was building to a revisitation of ‘The Web Planet’, but it might be simply used as a blank slate to build a new story around.

I would like it on record, so that I can either be proved definitely right or wrong, that I do not think Chris Chibnall would make actual bees the big villain of Series 13. Say what you like about Chris Chibnall, I just don’t think he’s that sort of writer.

The final idea I have on this, and it can’t be completely ruled out at this stage, is that Chris Chibnall doesn’t know how to pronounce ‘shawarma’.

Doctor Who Series 13 will air on BBC One this autumn.

Close Encounters of the Fifth Kind Official Trailer
Prisoners Of The Ghostland: Nicolas Cage and Sofia Boutella team up in exclusive clip
Endeavour Series 8 Episode 2 Review: Morse Haunted by Ghosts of His Past
Link Tank: Beta Ray Bill Could Be Coming to the MCU
SciFiNow partners with SCI-FI-LONDON Film Festival
V/H/S/94: Trailer released for latest in found footage anthology