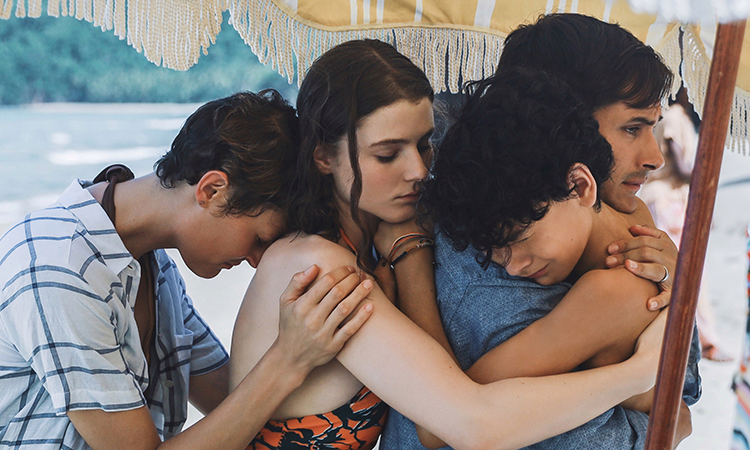 “He has a total vision and you have to commit to it 8,005 per cent or you’re missing out,” says actor Alex Wolff of starring in M. Night Shyamalan’s latest film. “You want to go with exactly what he’s doing and if you commit to that fully, you end up looking really good. That’s what I’ve seen.”

The film in question is Old, an oft-kilter, high-concept drama with a thrilling premise that brings to mind a “long-form Twilight Zone”, as the writer-director describes it: a group of people vacationing on a secluded tropical beach discover they’re ageing rapidly across the day, while unable to leave the cove the way they entered. It’s adapted by Shyamalan from a graphic novel, Sandcastle, by French writer Pierre Oscar Lévy and artist Frédérik Peeters.

“When I first thought of doing the movie,” Shyamalan says, “I wondered [about] the fear of an existential thing that’s scary. Not a raptor that’s chasing you, but time, and would you be able to handle that? And it turned out that audiences everywhere relate to this notion of fear. They find it horrific, and I think it’s probably that our relationship to time is a version of our fear of dying. And I guess when I make a movie about ghosts, it’s the same thing: your fear of dying and what happens.

“Our entire life in one day is a very universal thing. I think all of us look at our kids, or young ones in our family, and [wonder] how did that time travel so fast? Or we look at our parents and they’re now old and frail, and you’re shocked they’re not the people that you always thought they were. I think we share that, whatever culture we’re from.”

The film features a compelling international cast, including Rufus Sewell, Abbey Lee, Ken Leung, Nikki Amuka-Bird and Aaron Pierre, all of whom play characters tipped off and driven to the secret beach spot by staff from their shared hotel. But the anchor of the film’s narrative and emotional journey is one family in particular. Guy (Gael García Bernal) and Prisca (Vicky Krieps) are a couple whose marriage is on the rocks. As an intended final getaway ahead of an implied divorce, they bring their kids – eleven-year-old Maddox and six-year-old Trent, initially played by Alexa Swinton and Nolan River respectively – on holiday to a tropical resort Prisca reportedly found online. As their strange circumstance sees their entire lives reduced into a single day, the family must try to stay together in the face of this threat.

Wolff and Thomasin McKenzie play Trent and Maddox once the rapid ageing hits a certain point, while Eliza Scanlen plays Sewell and Lee’s characters’ daughter, Kara, from partway through the film. These three actors have particularly tricky roles to play. It’s not that the characters are necessarily children stuck in adult bodies. The minds age alongside the physical form, but the beach’s apparent magic means that they’re crucially missing out on all the life experience that’s meant to inform each stage of those mental and biological changes.

“Our hot topic of conversation was child psychology,” Thomas McKenzie tells us. “I did a lot of research into child psychology and the different stages of a child’s life. Weirdly, another thing I looked into a lot, as research, was zodiac signs. I think I was looking for a new way at building a character and I wanted to check out what Maddox’s zodiac signs would be, and then compare that to my own. Also, I went through all of my family photos: of my parents when they were younger and my grandparents when they were younger, seeing the development there. A lot of my research was centred around family, thinking about my loved ones.”

Wolff’s deep dive into child psychology was even more extensive, to the point that he convinces us he could become a scholar on the work of Jean Piaget. In addition to studying, he “went through journals of mine, and found my friend’s childhood journals. And I saw the weird way logic works: ‘I love Becky, never mind, I’m mad at Becky.’ I saw how quickly and how broadly, but how intensely, emotions are felt. And a lot of them talked about how weird your body is when you’re a kid. Your limbs are almost detached. That stuff was all fun.”

In a good way, the film is pretty disorienting from minute to minute; a quality reportedly reflected in the first script draft the actors read. “I read it and afterwards I was feeling unwell,” says Vicky Krieps, “almost as if I was going to throw up. And at the same time, I had chills because something had moved me very deeply. Was this horrifying or was this really touching? And watching the movie, I had the same type of feeling where I was lost in my own emotions.”

In some reading material SciFiNow’s provided before hearing Shyamalan speak about the film over Zoom, the filmmaker is adamant that Old is not what he would consider a horror movie; nor does he tend to make those in general, in his eyes. The argument laid out is that horror cinema, by and large, tends to set up death as an inevitable final destination for a story’s direction; you either survive a life-threatening event or you don’t. Whereas with Old, although the element of survival is there, it’s as much about the emotional journey after you hopefully end up surviving a nightmare scenario like the one presented: can you come out of that experience stronger than you were before? That’s also a throughline in many of the prior Shyamalan films many people would label as horror, such as Signs, The Sixth Sense or Split.

“I would agree with Night that it’s difficult to call it a horror movie,” Krieps tells us. “But I would say it’s horrifying. It’s a horrifying non-horror movie, because it’s horrifying on a very different and maybe deeper level. It goes so deep inside of you, talking about things that you’re scared of since you were a child. That is almost more unsettling than any kind of horror movie you would see.”

“It’s a suspense drama,” is how Wolff describes Old. “I think it’ll scare [people] in a way that is unexpected. I think what’s unexpected about it is how much these ideas and these combinations of unique circumstances are like a nightmare. And a nightmare doesn’t feel like a horror movie nightmare. It doesn’t necessarily have jump scares. Sometimes a nightmare just feels off and it feels like it’s an expression of the subconscious. And I think that’s what this movie is; it’s almost like an id just running around.”

“I think it has something slightly timeless about it,” Wolff continues, “in that it’s bold and it’s unique and it’s risk-taking. It reminds me of a film that could have been made in Sweden in the late fifties or something, but it also could have been made 50 years from now. I think it’s one of these timeless special movies that I hope people talk about for a long time.”

Old was shot in the Dominican Republic in autumn 2020, with all the necessary production measures in light of the global pandemic that kicked off at the year’s start. “I think the pandemic has forced us to slow down and made us aware of how fast we were going, not being present,” says Shyamalan. “It almost forced us to be present for a second. And what feels so uncomfortable is us letting go of our kind of toxic ways of not being present. And it’s shocking to the system and uncomfortable. Is this the way I want to live my life? Are these the people that I want to live my life with? To some extent, the characters in the movie realise that no matter what speed the time is going, if you’re with your loved ones you’re going to be okay. And we all felt that a little bit. Those of us that couldn’t be with our loved ones realised how important that was.”

Related to this, Krieps sees the idea of being present as a major theme of the film: “We keep categorising things in life. This is a very important moment; this is a little less important moment. And even with people: this is a very important person, so I will give him a lot of time. But what if we let go of this and we just become present, where you just really are with the next person you meet. It might be a random stranger in the street, and maybe you will be mentally, physically really present.

Old is in cinemas from July 23.

Close Encounters of the Fifth Kind Official Trailer
Foundation: Adapting the impossible
Star Wars Visions Review: A Stunning Anime Reinterpretation of the Saga
Squid Game: What Could Season 2 Look Like?
The Matrix 4 “Describes the Next 20 Years of Digital Life”
Sacrilege: Exclusive clip from Pagan horror