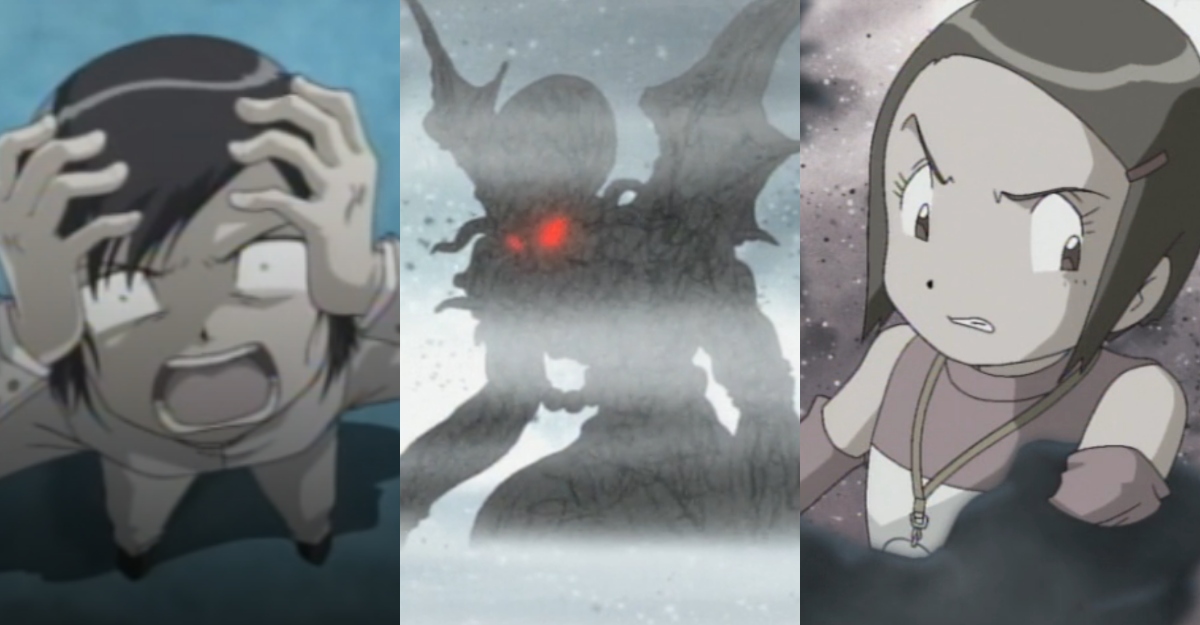 On June 25, 2000 on Fuji TV in Japan and October 21, 2000 on Fox Kids in the U.S. an episode of Digimon aired that over 20 years later continues to haunt fans and the franchise itself alike. This was an episode that opened up a world of possibility and a plotline darker than anything else seen in the series – an episode that ended with a gigantic cliffhanger that has never been directly dealt with since.

The installment was season 2 of Digimon, episode 13. ‘The Call of Dragomon’ a.k.a. ‘His Master’s Voice.’ This episode introduced the Dark Ocean.

After all these years it continues to spark debate and analysis from fans. Why? It’s not like Digimon didn’t have its fair share of dropped plots. Why does the Dark Ocean stand out and why was its mystery never resolved? To try and answer that, we have to take a deep dive into the episode that introduced it all.

It begins when Kari Kamiya experiences bad dreams and visions of an ocean swallowing her up. Dark creatures follow her in the hallways. She flickers out of existence and appears in the Dark Ocean. It’s a greyscale world. A lighthouse shines darkness instead of light. Kari attempts to find a way out and stumbles across the dark creatures from earlier, glowing red eyes their only feature. They painfully cry out for help, desperately hoping Kari will free them from the power of the evil Digimon Emperor.

It’s all a trick however and important differences between the Japanese and English versions of the episode occur at this point. In the English version the dark creatures attempt to kidnap Kari, hauntingly telling her, “you’ll be our new queen. We need you.”

In the Japanese version it’s much more unsettling. They tell her, “you are worthy of being our bride. In order to fight the new god (the Digimon Emperor, it’s implied), we must create new offspring.”

In both versions Kari is saved by her Digimon partner Gatomon and the dark creatures retreat into the ocean. In the English version they woefully explain their foiled plan,

“We thought you would love to be our queen. With your power you could lead us in the battle against our undersea master. I guess we were wrong. Beware, our master can sense your power too and he will come for you.”

In the Japanese version they leave Kari with this parting message.

“Chosen one… we believed you would be glad to be our bride. Very well. We shall return to the depths, to our former god, and wait for the time.”

Kari escapes from the Dark Ocean but a giant Digimon, named Dragomon in the Japanese version, rises from the ocean. The master the dark creatures spoke of. Its eyes glow red. END OF EPISODE. What does it all mean? This seemed like it was going to be a major storyline. The end of the English episode even teases, “who is this evil dark undersea master? Don’t miss the upcoming Digimon!” But that question would never be answered.

The master/god would never be seen again and Kari never crossed paths with the dark creatures. It’s a massive cliffhanger that the franchise has never resolved and no one from the production has given any answers to. The Dark Ocean does show up again but only for brief appearances.

A flashback in episode 23, ‘Genesis of Evil,’ shows a young Ken dipping his digivice into the Dark Ocean’s waters, transforming it into a Dark D3 digivice which would later give Ken the power to inhibit digivolution. Ken, as the Digimon Emperor, also draws on the power of the Dark Ocean to power his base.

Kari, Ken Ichijouji, and Yolei Inoue stumble into the Dark Ocean through a “phase warp” in episode 31, ‘Opposites Attract.’ Yolei is unable to see the Dark Ocean until her frustration at that somehow makes it so she can. This seems to indicate that one’s emotions when entering the Dark Ocean can have a major impact on what happens to you there. Ken and Kari both have their share of trauma which may have influenced the Dark Ocean’s hold over them. Ken was originally pulled into the Dark Ocean after his brother died, a brother Ken had previously wished would “just disappear.” Kari watched Wizardmon, a kind Digimon that she’d grown close to, jump in front of an attack meant for her. She held him in her arms as he died. Yolei, her life comparatively easier, wasn’t affected by the Dark Ocean as much as them.

In the Japanese version of the episode Kari worriedly states, “they called me here… again.” It seems the master/god still wants Kari’s power. The three manage to escape through a “hole in space” and never return.

Later in episode 45, ‘The Dark Gate,’ Ken banishes the evil Digimon Daemon to the Dark Ocean. He opens a portal there by facing his darkest fears and with a little team friendship power. Curiously Daemon indicates he already knows what the Dark Ocean is, calling it Dragomon’s Ocean in the Japanese version.

It’s briefly mentioned in episode 48, ‘Oikawa’s Shame’ when evil mastermind Oikawa reveals the Control Spire’s that plagued the team in the first half of the season and prevented regular digivolution are a “present” from the Dark Ocean.

The Dark Ocean also gets a few fleeting moments in the Digimon Adventure tri. films. Previously unknown Digi Destined Himekawa becomes stranded in the Dark Ocean after her Digimon partner, Taprimon, couldn’t remember her. She fought back against the dark creatures there but was pulled into the ocean never to be seen again. The films also address the Daemon cliffhanger by hinting he could return as a villain but this never went anywhere. With the Digimon franchise well into a reboot of the original first season, it’s doubtful this or any other Dark Ocean plots will ever get resolved.

That leaves fans (including us) to try to make sense of it all. First off, let’s look at those key differences between the motivations of the dark creatures in the Japanese and English version of episode 13.

In the English version, the creatures seemingly tricked Kari into helping them by using the dark spirals. They knew this would make her sympathetic and hoped she would join them as their queen in a battle against their old undersea master. Why did they need Kari for this? They mention she has power they need but it isn’t clear what that power is. Previously in the series she had a connection to the crest of light so maybe they were hoping her light would be able to wipe out their master. There’s no clear answer to any of that question but it seems Kari, more than any other Digi Destined, has some special role to play in this conflict.

The Japanese version’s motivation for the dark creatures is much clearer. They aren’t fighting against their god; they’re working for him to fight the Digimon Emperor. They chose Kari because she was worthy of being their bride, a bride who would create new offspring to aid in the fight. This leads us to speculate that these dark creatures, which certainly aren’t Digimon, are offspring of some other bride.The horror of all that is off the charts and deeply uncomfortable, especially since Kari is a middle schooler. It’s no wonder this was changed for the English version and rightly so.

Putting that real life horror aside, the biggest lingering question at the end of the Japanese episode is what the dark creatures meant when they told Kari to, “wait for the time.” The time of what? What did this god want with her?

In all this we also need to ask what the Dark Ocean itself even is. It’s implied to be a dimension or world that isn’t the Digital World, especially since Kari can get there without using one of the Digi-World gates. We only see a small section of the world. The ocean, a beach, the lighthouse, an abandoned town, and a tunnel.

The only other clues we have to try and decipher what the hell the Dark Ocean is comes from its clear influence, H.P. Lovecraft. Dragomon might as well be called Cthullumon given his appearance and the way he rises from the sea. A clear connection is drawn in the Japanese episode when a text card appears just before the title card, written in “digicode.” This is basically the Digimon alphabet and thanks to TMS over on the Digimon With the Will forums we know it translates to “Ph’nglui mglw’nafh Cthulhu R’lyeh wgah’nagl fhtagn.”

In Lovecraft’s “The Call fo Cthulhu” story this translate to “In his house at R’lyeh, dead Cthulhu waits dreaming.” This would imply that Dagmon is actually Cthulhu! This could mean any number of things for the multiverse of Digimon but just reading it on the tin, it matches up with the dark creatures statement in the Japanese episode that they’d “wait for the time.” We can now reasonably extrapolate that they’re waiting for the time Dragomon aka their god will wake. Most likely to aid in their fight against the Digimon Emperor… or perhaps something bigger.

With all this information, fragmented as it is, what can we reasonably guess the Dark Ocean is? Perhaps, since the Digital World is made of data, the Dark Ocean is the black screen in-between the 1’s and 0’s in the Digital World’s code. A place that has to exist for more “code” to be written but that’s barren of any life. Dragomon and the dark creatures could have been banished there long ago but before that it was an empty world, only carrying fragments of the code around it (the town, the lighthouse, etc.) That also lines up with the Digital World, which also contains fragments of real world machines and structures (trains, buildings, etc.) This proximity to the code of the Digital World is further supported by the fact that people or Digimon could fall through “phase warps” into it like Kari, Ken, and Yolei did. The Dark Ocean is a world between a world. A world that needs to exist for the sake of another world but is not truly a world of its own. A world you almost never see but if you do… it’s nothingness.

It’s no surprise why the Dark Ocean continues to captivate and frustrate Digimon fans all these years later. A gigantic story was hinted at, one that held particular importance to fan favorite characters Kari and Ken. It could have expanded the scope of Digimon’s world, bringing in a power beyond anything else the team had ever faced. The “what if?” of it all holds great power over fans. It’s a shame the show abandoned something that could have been so compelling.

However, perhaps its lack of resolution isn’t a completely bad thing. It makes the world of Digimon more mysterious. There’s more going on than just the battles the kids are having. There are other forces at work. Powerful forces that have their own goals outside of simple destruction or desire for power.

The more you get of a franchise like Digimon the more likely you are for its fantasy world to get overcomplicated or over explained. Things get too tidy, too neat, everything is related to each other or a small group of characters (looking at you, Star Wars.) The Dark Ocean breaks all that up. Sure our characters’ stories intersect with it but they’re only a small part of the mystery of the Dark Ocean. If it’s a mystery that’s even solvable. As much as fans want it solved, there’s something powerful about a mysterious force lurking at the edge of the Digimon universe.