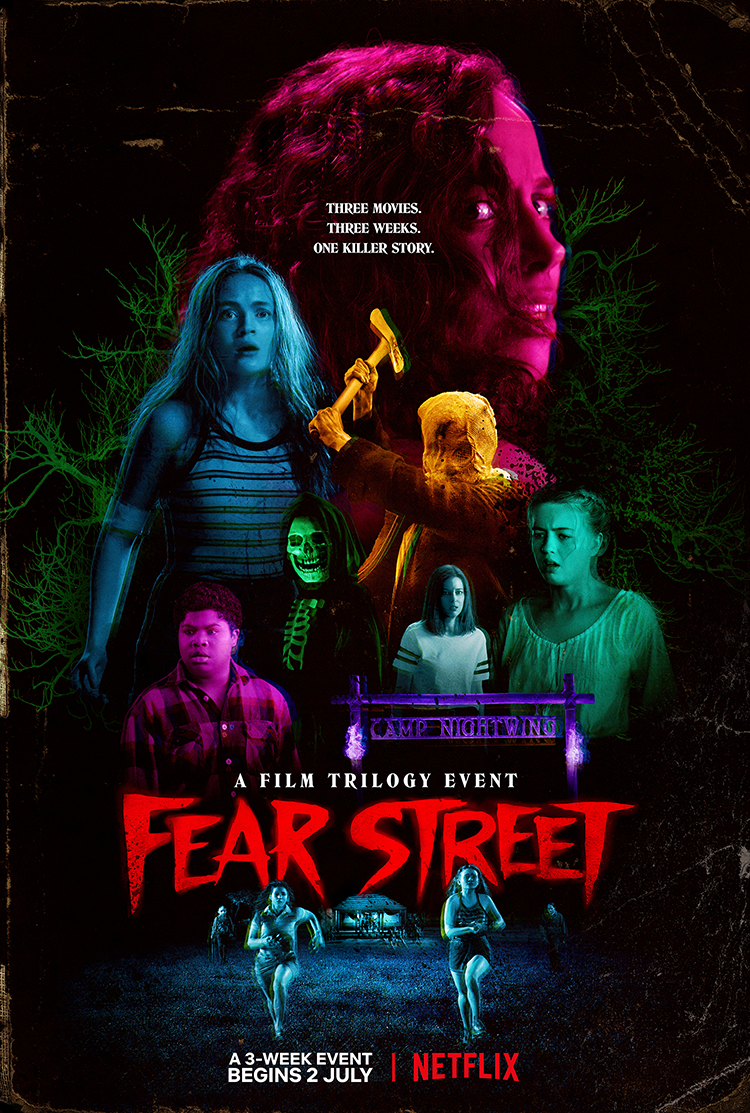 “The movies take place in different eras, but at the same time, humans, at our core, we’ve kind of been the same in a way – unfortunately, also struggling against the same sort of oppression and challenges,” Kiana Madeira tells us who plays Deena in the three Fear Street movies. “History has a way of repeating itself and it was definitely interesting, time travelling in that way and learning about that.”

We’re speaking to the three central young people in the Fear Steet movies – Madeira, Benjamin Flores Jr. who plays Josh and Olivia Scott Welch who plays Sam – about switching eras for the first and third Fear Street movies which jumps from the Nineties in Part One, to the 1600s in Part Three (they’re largely not in the second installment, which takes place in the Seventies).

Luckily, for Part One of Fear Street, there were plenty of people on-hand who remembers the Nineties to get the actors in the right mindset: “Before we started filming, Leigh (Janiak, who co-wrote and directed all three films) made a whole Nineties playlist for us to listen to for the movie,” Flores Jr tells us. “So we could get into that vibe with the Nineties and stuff like that.

“I loved listening to the music,” Welch agrees. “I had listened to the Pixies some but Leigh is a huge Pixies fan. Listening to the music was really cool and different. I feel like I grew a big appreciation for Nineties music. I’d like liked it before, but now I’m like: ‘You don’t understand! It was different.’ And then I’m like: ‘What am I talking about?’ I just played one. I didn’t actually live in the Nineties as a teenager, but it feels like I did [haha]!”

It’s not just the music that the actors appreciated from the era, the clothes were pretty cool too: “I love Doc Martens now,” Madeira enthuses. “Deena wears Doc Martens and I actually still have the same pair that I wore in the movies because I broke them in. The wardrobe [department] were so great, they let me keep them because, in the beginning, they’re pretty uncomfortable, but then when you break them in, they fit like gloves! Doc Martens are super popular now but really popular then and I didn’t realise how stylish and comfortable they can be. They are the best boots!”

“I love the apparel from the Nineties,” Flores Jr agrees. “I never used to like jeans, but when I started playing Josh, I had to wear jeans and I love jeans now.  Yeah, Fear Street definitely changed my wardrobe up a little bit. I was like: I need to get some jeans! But the outfits we wore in the 1600s were pretty awesome too.”

Ah yes, as was clear from the recently-released trailer for Fear Street Part Three: 1666 the actors from the first two movies, also star in the third movie in a different role. Playing characters in the 1600s certainly brought up a few challenges for the actors, specifically with the change in dialect: “Our dialect coach is this wonderful woman named Charlotte Fleck. She sourced a diary from the 1600s that someone wrote. It’s this person’s account of like: ‘Today, we had our harvest’  and ‘tonight, we’re having a town meeting’. It was just the day-to-day of what they did, and we all got [a copy], and then we would be like: ‘Did you read that page about that someone was cheating on their wife?’ Such 1600s drama!”

“I feel like I had a lot of imagination when we were filming the 1600s because we were on this open field and there were little homes planted everywhere,” Flores Jr remembers. “So it was just open to your imagination. You could think of the 1600s as whatever.”

No matter the era, the cast believe that at the movies’ core there are positive and important messages for people to take away with all them, and they’re definitely going to get more than they first might expect.

“People are going to be coming in like ‘oh, these are horror movies’ and they’re definitely going to get that but they’re also going to pick up on a lot of other deep messages that people in their daily lives struggle with,” Flores Jr tells us, “and hopefully we did a good job of bringing that to the surface and making it very easy and understandable for people.”

“I hope that audiences feel that even if you’re labelled an outsider or other or considered an underdog, you can win,” Madeira adds. “You can be the hero of your own story. The film is about Shadyside, a group of misfits and outsiders who actually come together and empower each other.

“I think that’s really important and really powerful to see on screen.”