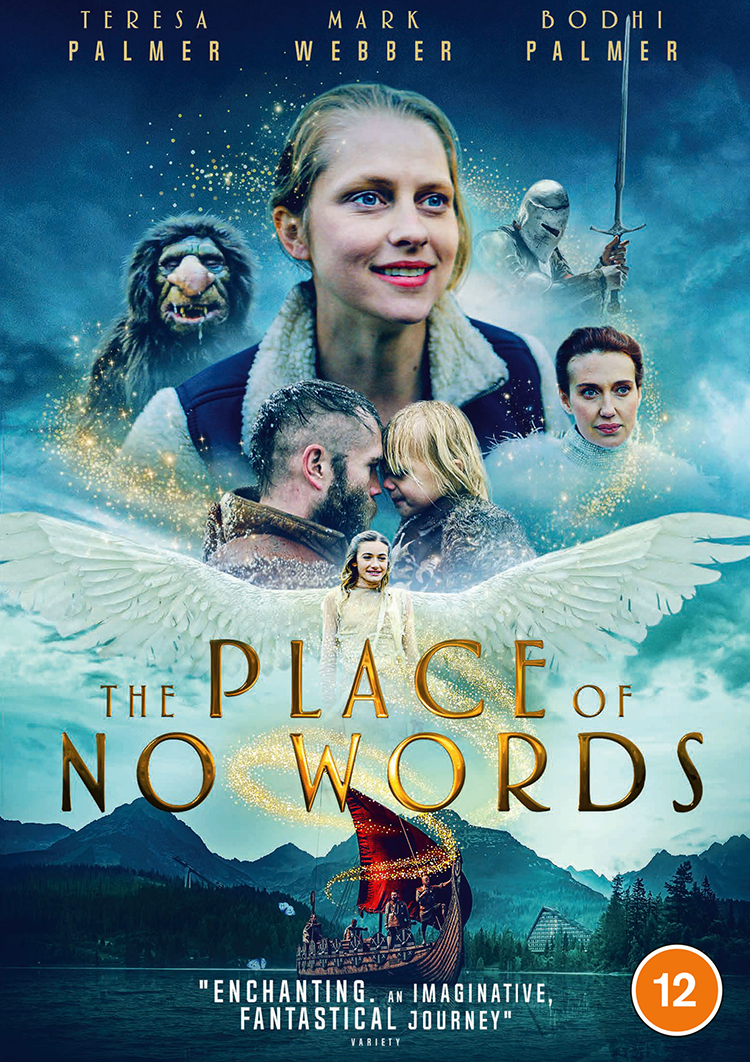 Mark Webber and Teresa Palmer are the husband and wife filmmaking team who have embarked on their latest film, The Place of No Words, a powerful and moving fantasy drama.

Mark Webber, best known for his role in cult sensation Scott Pilgrim vs The World and for directing critically acclaimed indies like The End of Love and Flesh and Blood, acts, writes, directs and even edits this latest movie.

Teresa Palmer, best known from Lights Out, I Am Number Four and TV smash hit A Discovery of Witches acts opposite her husband and their young son, Bodhi Palmer, who makes his acclaimed acting debut.

In The Place of No Words, a family embarks on an imaginative adventure exploring how we cope with grief, and the love, laughter and pain we can find within it. Told through the eyes of a father and his young son, the story moves between the authentic real world and a fantasy realm filled with mythical creatures and adventure.

Mark Webber and Teresa Palmer tell us more about the film, building a fantasy world with the help of Jim Henson’s workshop, and working as a family…

How was the idea for The Place of No Words first developed?

Mark: The idea came to me not long after I’d finished my film Flesh and Blood which I made with my brother, and my mom and dad. I decided I wanted to work with my son Bodhi and explore creativity, imagination and loss. Having recently reunited with my own father in Flesh and Blood while he was terminally ill, that was the impetus to start the script.

You seem to use improvisation a lot. How heavily do you map out the script first?

Mark: My scripts are always well mapped out, but they are written in a way to embrace moments of improv. I like to set parameters and emotional beats, but I’m not too concerned with how we get there, I’m more fascinated by how it unfolds to harness spontaneity. I use that as the pace car for the emotional tone and rawness and we have fun figuring out how to get to that place.

It’s nice to see you and Teresa [Palmer] working together. Was there ever a consideration to use another actor if Teresa became busy, for example, or was it always done as a family?

Mark: Oh no, it’s always as a family. There’s no other way on these films! I consider The Place of No Words to be the last in my trilogy which I refer to as ‘reality cinema’. I made The End of Love when my son Isaac was two, Flesh and Blood was made with my mum and brother, and The Place of No Words with Teresa and Bodhi. You could even count The Ever After as well in this series, since Teresa and I worked together then as well. I’m always thinking of how she can be involved.

Teresa, your character has to deal with a lot in the film, how did you prepare for the role?

Teresa: It’s such an organic process for me. I did research and watched YouTube videos on how people manage the kind of grief we see in the story. I found my character to be very delicate because she navigates such an awful amount of trauma, while also having to show up and be a mother, creating a semblance of normality. She’s a swinging pendulum, sometimes she finds joy in small moments, and sometimes she crumbles.

Some of my favourite moments in the film are when she’s on her own and having overwhelming feelings which she feels she needs to keep from her child. There’s a real humanity to that and something I think people can relate to.

The Place of No Words moves between a fantasy world and the real world. In the fantasy scenes, we meet some wonderful creatures. What was your inspiration behind this?

Mark: I love puppets and all of Jim Henson films like Labyrinth, and those great adventure movies from the Eighties and Nineties. I love The NeverEnding Story! It’s so inspiring to me and the imagery takes me back to my childhood.

We came up with these characters called the Grumblers in The Place of No Words. Our makeup artist Mario Torres Jr. did some sketches and had an opportunity to meet with Henson’s workshop and pitch what I was doing. It was a really exciting day to go there, sit in the waiting room and see creatures from The Dark Crystal in the same room! Henson’s workshop came on board and offered their services, animatronics and creature suits and the facility for Mario to put together the mould for the Grumbler face. It was huge and such a cool thing!

We did so many takes of Bodhi with the Grumblers without revealing what they really were! We wanted Bodhi to believe these characters were real! [laughs]

Your son Bodhi is amazing in the film! Did you give him lines before shooting scenes, or let him improvise?

Mark: Any lines written for him, we’d run them before shooting each scene, so it was very much in the moment and felt real. When you make a film like this, maintaining that authentic feeling is often the most challenging part.

During this shoot, it was gruelling for all of us. We made a film with around five people in the cast. There wasn’t a big crew and we were working really remotely, filming on the sides of mountains and locations like that, so it was tough, and Bodhi did so well.

Teresa: I wasn’t there for most of this, since I was shooting A Discovery of Witches in Cardiff throughout the week, and came back to join them when I could, so Bodhi didn’t have his mum there with him, making sure he was okay. He was obviously well looked after, but it did limit the filmmaking a little since we had to work around him and what he was able to do. Some days it might even be just an hour or two of filming if he was keen that day, and Mark never put him in a situation where he was upset. But there may have been the odd toddler tantrum, and I think one of those was caught on film [laughs].

Mark, did your indie filmmaking style work well in this approach, working around what Bodhi could do, and also taking into account Teresa’s schedule?

Mark: Yeah absolutely, and that’s the only way I can work. You can be quite flexible and ‘in the moment’ with a small, close-knit team. Even in the future, if I do bigger and more ambitious movies, I’d like to use a small crew. When you work on a movie, the people you have around and their energy affects so much, especially if you’re trying to make something intimate.

What do you hope audiences take away from The Place of No Words?

Mark: I really want people to feel something. I want people to feel moved, connected and seen, and that they’re a part of a shared human experience. A film dealing with death, meeting it head on and attempting to be a positive meditation, in the mind of a child, might seem lofty in some ways but it’s also very human.

Teresa: The most moving moments I’ve had are when someone has a profound emotional reaction to the film. One of my friends went through stage 3 breast cancer and discovered the movie. She said it got a lot of aspects of the emotional journey right, it felt revealing and didn’t sugar-coat the experience at all. Of course, the experience of someone going through this can be grim but there are also moments of hope, joy and celebration of life, in and amongst such extreme sadness. She said it was a therapeutic experience and it made her feel heard and seen, and it really resonated with her family too. She was very complimentary towards Mark and what he managed to show.

That’s an amazing testimonial for the film.

Changing the subject a little, Mark, Scott Pilgrim vs The World just had its 10th anniversary. Have you been surprised at the cult fanbase the film has received, or did you always know you were making something original?

Mark: Oh, I knew! [laughs] It was special, but it felt very advanced in a way. I felt like people weren’t ready at the time. It’s funny that when it came out, it made something like $10m on its opening weekend and, to me, that’s significant, but it’s all relative because it was considered a box office failure. That’s incredibly successful in my eyes, since I come from the indie world. It’s like, wow, people showed up!

To re-release a film in cinemas a decade later is so cool and it feels amazing to see that fan reaction. There are people who watch the movie over and over again, and still get so much joy from it, so I really appreciate being a part of that.

Teresa, A Discovery of Witches recently wrapped on its third and final season and has had such a passionate fan response, how has it been for you?

Teresa: It’s been such a journey since I stepped into the role of Diana, and seeing her through the trilogy, celebrating her evolution as a character. I still feel very close to her. On the last day of filming season three, even though it was bittersweet, I felt like her story came to such a beautiful, organic end that I was ready to let go and say goodbye. It’s been an incredible experience.

This was my first foray into television, and I’m so grateful to have had that opportunity. I meet and talk to people every day who love the show and tell me about the impact it’s had on them. It’s lovely to hear that.

What’s next for you both?

Mark: I’ve just finished writing my next project but haven’t told anyone about it yet, so I’m keeping it on the lowdown! [laughs]

Teresa: A Discovery of Witches Season Three is releasing soon so I’m excited for people to see that. I also just wrapped a very cool film called The Twin which is directed by Taneli Mustonen who made a great movie called Lake Bodom. The Twin is a psychological thriller set in the Eighties and it’s honestly one of the coolest films I’ve ever been a part of. I’ve just seen the trailer so keep an eye out for that soon!

Dazzler Media presents The Place of No Words on DVD & Digital from 5 July. Find it on Amazon or iTunes.