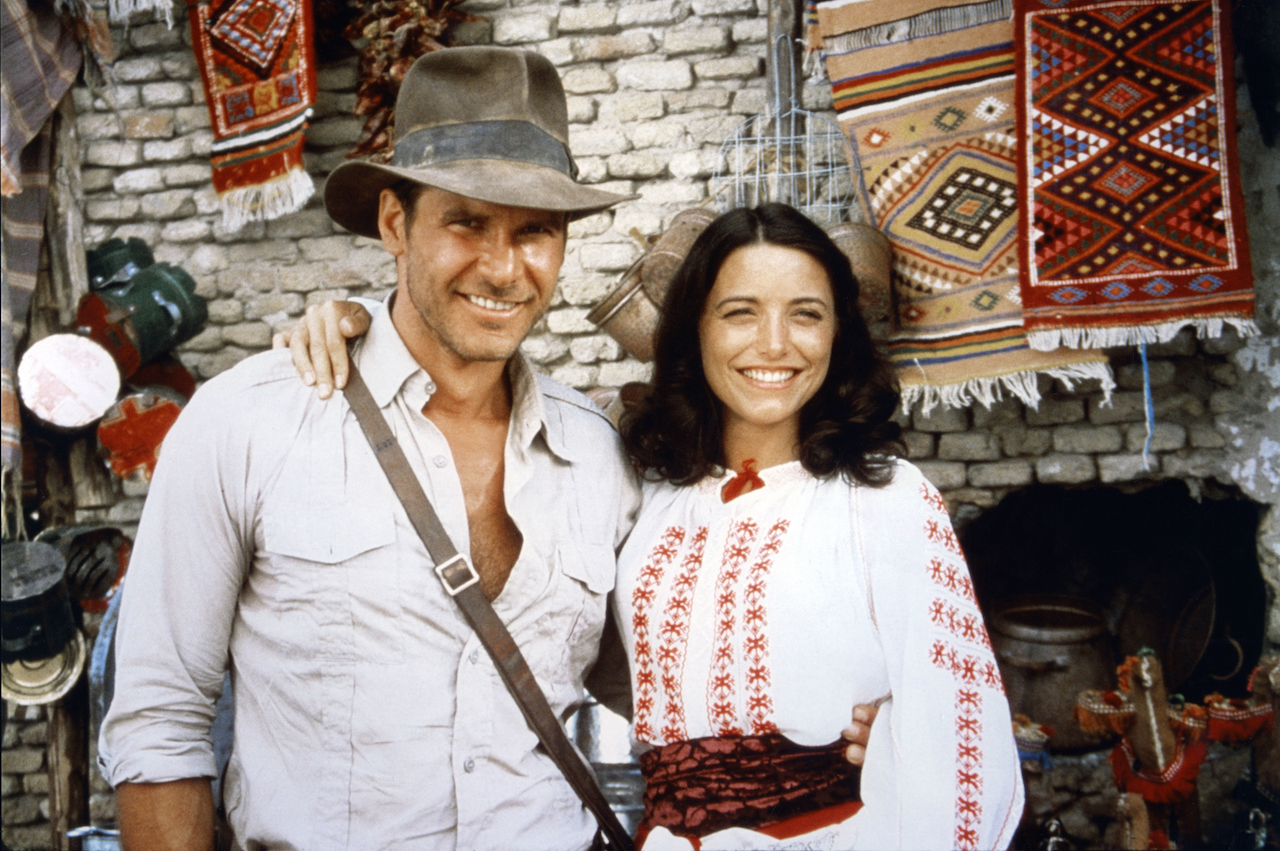 Many people (rightfully) talk about the opening, tomb-raiding sequence of Raiders of the Lost Ark, which introduces adventurer archaeologist Indiana Jones to the audience as he lifts a golden idol from a booby-trapped Peruvian temple. But it’s not as common to hear about the movie’s ending…

No, I’m not talking about the scene in which the supernatural force inside the Ark of the Covenant melts the Nazis’ faces, or even the long, ominous final shot of the Ark being packaged away in some nondescript government warehouse—we talk about those plenty. I’m referring to the final scene between our hero, Dr. Indiana Jones (Harrison Ford), and his partner-in-adventure Marion (Karen Allen). In the Raiders denouement, Marion meets a grumpy Indy on the steps of a Washington D.C. building (actually, the San Fransisco City Hall) after his fight with government bureaucrats, the latter of whom said they’ll be taking care of the Ark from here on out. Marion offers to buy Indy a drink, effectively cheering him up and leaving the characters, and their winning dynamic, on a positive note.

It’s the story beat that wraps up Indy’s first adventure in an emotionally satisfying way, but it wasn’t in the original cut of the film. We owe its inclusion to Marcia Lucas, the Academy Award-winning editor behind movies like Taxi Driver and Star Wars, who also happened to be married to George Lucas when Raiders of the Lost Ark was made. She’s one of the most underrated artists from this era of Hollywood filmmaking, and we don’t talk about her contributions on some of the biggest nerd blockbusters of all time enough. Today, we’re taking the excuse of Raiders‘ 40th anniversary to do just that.

The Feminist History of Hollywood Editing

Movie editing is both an underappreciated aspect of filmmaking and one of the more women-friendly roles in a Hollywood moviemaking apparatus that’s mostly unwelcoming to women in positions of creative authority. Historically, women were able to more easily enter the field of editing because jobs like physically cutting the film negative was viewed as more of a menial task. As Lawrence of Arabia editor Anne V. Coates once said: “I was taught, or I must have heard it somewhere, that as [editing] became a more important job, men started to get in on it. While it was just a background job, they let the women do it. But when people realized how interesting and creative editing could be, then the men elbowed the women out of the way and kind of took over.”

While more men have elbowed their way into the position as soon as it became cool, there remained and remains a slightly higher percentage of women in editing than in other positions of creative control. According to Women in Hollywood’s 2019 report, for the top 100-grossing films of the year, 23 percent of editors were women, compared to 20 percent of writers, 19 percent of executive producers, 12 percent of directors, and only two percent of cinematographers. (Women were best represented in the producer role, at 26 percent.)

“There are more women editors than people realize,” editor Thelma Schoonmaker, a frequent collaborator of Martin Scorsese, told The Telegraph in 2015 (via Film Supply). “I think we’re more able to keep our eye on what the film needs. Between men, sometimes it’s a real ego battle, and that’s very bad for the film.”

Editors control the pace of a film, and therefore have a huge impact on the story. “It’s all about tension,” explained Sally Menke (via Variety), who edited Quentin Tarantino’s films before her death in 2010. “So you follow the emotional arc of a character through a scene, even if, as in the opening of Inglourious Basterds, they’re just pouring a glass of milk or stuffing their pipe.” Menke described editing as “all emotional, impulsive, instinctual.”

Marcia Lucas was an editorial voice in crafting movies like American Graffiti, Star Wars (for which she won the Oscar, alongside Richard Chew and Paul Hirsch), The Empire Strikes Back, and Return of the Jedi. It’s difficult to completely understand Marcia Lucas’ impact on George Lucas’ films, as much of her role (both credited and uncredited) in his films has been downplayed since the Lucas’ divorce in 1983, but there are some choice quotes from those integral to the making of these films that help shed light on the scope of her impact.

“You can see a huge difference in the films that he does now and the films that he did when he was married,” Mark Hamill said of Marcia’s impact on George’s films in Michael Kaminski’s 2008 book, The Secret History of Star Wars. “I know for a fact that Marcia Lucas was responsible for convincing him to keep that little ‘kiss for luck’ before Carrie [Fisher] and I swing across the chasm in the first [Star Wars] film: ‘Oh, I don’t like it, people laugh in the previews,’ and she said, ‘George, they’re laughing because it’s so sweet and unexpected’—and her influence was such that if she wanted to keep it, it was in. When the little mouse robot comes up when Harrison and I are delivering Chewbacca to the prison and he roars at it and it screams, sort of, and runs away, George wanted to cut that and Marcia insisted that he keep it.’”

Kaminski devotes an entire chapter in The Secret History of Star Wars to Marcia, writing: “Marcia, along with many of George’s friends, critiqued which characters worked, which ones didn’t, which scenes were good, and Lucas composed the script in this way. Marcia was always critical of Star Wars, but she was one of the few people Lucas listened to carefully, knowing she had a skill for carving out strong characters … Often, she was a voice of reason, giving him the bad news he secretly suspected—‘I’m real hard,’ she says, ‘but I only tell him what he already knows.’ … She kept her husband down to earth and reminded him of the need to have an emotional through-line in the film.”

It was Marcia who suggested that Obi-Wan die during Luke’s first visit to the Death Star. In the original draft of the script, Ben Kenobi escaped alongside Luke after a fight with Vader, as George explained to Rolling Stone in 1977 (via Syfy Wire).

“I was struggling with that plot problem when my wife suggested that I kill off Ben, which she thought was a pretty outrageous idea, and I said, ‘Well, that is an interesting idea, and I had been thinking about it’… Her first idea was to have Threepio get shot, and I said impossible because I wanted to start and end the film with the robots, I wanted the film to really be about the robots and have the theme be framework for the rest of the movie… But then the more I thought about Ben getting killed the more I liked the idea.”

Marcia also reshaped Star Wars‘ climactic trench run scene, which sees Luke Skywalker making a near-impossible run at the Death Star’s thermal exhaust port in order to take out the massive Imperial base. Darth Vader, in hot pursuit in his own TIE fighter, almost takes Luke’s X-wing out before Han Solo and the Millennium Falcon swoop in to knock Vader out of play, giving Luke a fighting chance at making the shot.

“The Death Star trench run was originally scripted entirely different, with Luke having two runs at the exhaust port,” Kaminski wrote in his book. “Marcia had reordered the shots almost from the ground up, trying to build tension lacking in the original scripted sequence, which was why this one was the most complicated… She warned George, ‘If the audience doesn’t cheer when Han Solo comes in at the last second in the Millennium Falcon to help Luke when he’s being chased by Darth Vader, the picture doesn’t work.’”

Marcia rarely gives interviews, but she did talk to Peter Biskind for his 1997 book Easy Riders, Raging Bull. In that interview (via New.com.au), she characterized her and George’s relationship like this: “I felt we were partners, partners in the ranch, partners in our home, and we did these films together. I wasn’t a 50 percent partner, but I felt I had something to bring to the table. I was the more emotional person who came from the heart, and George was the more intellectual and visual, and I thought that provided a nice balance.”

She continued: “But George would never acknowledge that to me. I think he resented my criticisms, felt that all I ever did was put him down. In his mind, I always stayed the stupid Valley girl. He never felt I had any talent, he never felt I was very smart and he never gave me much credit… When we were finishing Jedi, George told me he thought I was a pretty good editor. In the 16 years of our being together, I think that was the only time he complimented me.”

While Marcia Lucas did receive a credited role in the making of Raiders of the Lost Ark, she was instrumental in crafting the film’s denouement. Duwayne Dunham brings up the story in the above interview with Marcia (around the 6:30 mark) when he said, “Marcia was the last person to see [the rough cut of Raiders]. And the movie’s over, and we’re all patting one another on the back—Steven [Spielberg] and George, and [editor] Michael Kahn… and all of a sudden, Marcia says, ‘Say, fellas. I don’t want to rain on your parade, but just one thing…’ And everybody goes, ‘What?’”

“What happened to Marion?” Marcia jumped up to reenact the moment. In the rough cut of the film, the last time the viewer sees Marion on screen is when she’s tied to a stake having just narrowly avoided the same face-melting fate as those Nazis. And none of the male filmmakers working on the picture had noticed it. Apparently, the Marion and Indy scene on the steps that we get in Raiders‘ final version was a part of the original script, said Marcia, but Spielberg never shot it.

Marcia continued: “They didn’t think they needed it. I said, ‘I don’t want to leave Marion on the stick. We need to shoot that.’ So George went out and George shot the second unit scene of them coming down [the steps] … The movie needed it. It needed that little bit of closure.”

It’s the kind of basic story edit that is obvious to many—and, for what it’s worth, did become so to Spielberg, Lucas, and company once Marcia Lucas pointed it out—and an example of just how homogenous the creative teams behind most major Hollywood blockbusters truly are.

Marcia Lucas is a brilliant editor whose contributions to Hollywood filmmaking are hugely underrated. That legacy should not be discounted. And part of her contribution to culture-changing movies like Star Wars are grounded in a basic emotional intelligence most girls and women are socialized to possess, and excel at employing… if only we’re let in the room.

Close Encounters of the Fifth Kind Official Trailer
When the Sparrow Falls Review: The Handmaid’s Tale meets 1984
Loki: How Season 2’s Confirmation Impacted the Finale
War of the Worlds Season 2 Episode 7 Review: An Adventure in Space and Time
How Aliens Changed Video Games Forever
Old Review: They Grow Up So Fast