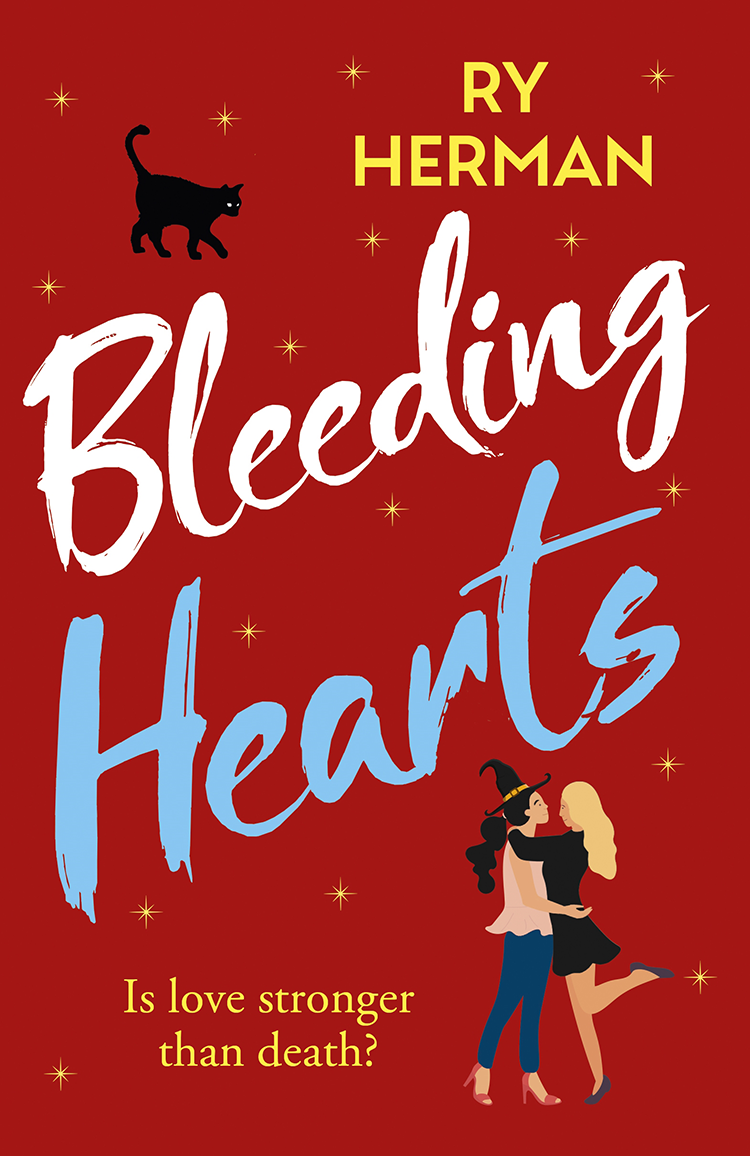 Back in the Dark Ages of the late twentieth century, queer stories in SFF were thin on the ground. We passed around well-worn copies of Ellen Kushner’s Swordspoint or Nicola Griffith’s Slow River, and huddled around the TV on Tuesday nights to watch Willow and Tara fall in love on Buffy the Vampire Slayer (it didn’t end well for them.) Other than that, there wasn’t much.

That’s changed. Over the decades that followed, queer characters have slowly made their way from the fringes to the SFF mainstream. In the past few years especially, they’ve appeared in every kind of story and subgenre, from paranormal romance to cosmic horror.

Personally, I’m a sucker for a good love story. So when I made my own contribution to SFF, with my novels Love Bites and Bleeding Hearts, I wrote the kind of story I wanted to read – a girl-meets-girl romance against a backdrop of witches and werewolves, vampires and angels.

Here are some of my favourite queer SFF romances from recent years, on page or on screen. They’re the ones that I found captivating, inspiring, or beautiful. Not all of these stories had a romance as the central plot, but all of them contained a love story that will make your heart flutter. 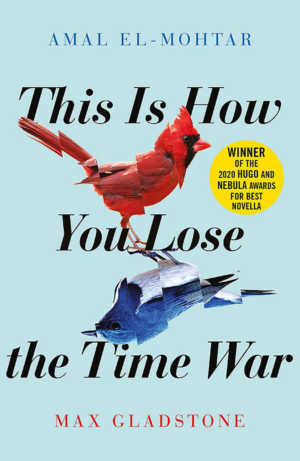 It starts in the ashes of a dying world, when Red finds a letter marked: “Burn before reading. Signed, Blue.” Red and Blue are agents on opposite sides of the Time War, a battle through all time and space to determine the nature of the future. Red is part of the Agency, a timeline where post-singularity technology has triumphed, while Blue works for the Garden, where a single consciousness has been embedded in all organic matter. Both women are the best at what they do, and both are dedicated to victory.

But then they start leaving each other letters. Coded messages that begin as teasing taunts. Unexpectedly, though, their mutual respect for each other’s talents grows into admiration, and then into adoration. Which makes them start to wonder exactly what ‘winning’ means.

This is a book with epic sweep and gorgeous prose, and it presents what may be the ultimate star-crossed romance – how can you create a future together if your life depends on wiping the other person out of existence? 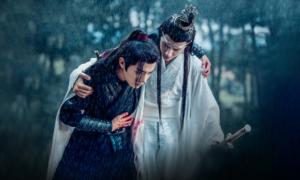 The first two episodes of this TV show make no sense whatsoever unless you watch them again after episode thirty-three. The explicit love story of the original novel was heavily censored in the television adaptation, becoming something never spoken aloud. Nonetheless, the romance remains so compelling that you’ll find yourself gasping with thrilled shock because a character finally had a facial expression.

That facial expression belongs to stoic, honourable Lan Wangji, paragon among those who cultivate the noble arts of magical swordsmanship. When he meets the irrepressible, rule-breaking Wei Wuxian, his initial irritation changes with the speed of an obstinate glacier into love. And later, when Wei Wuxian begins to practice the forbidden magic of necromancy, Lan Wangji is the only one who believes he has not fallen to the dark side.

There are other reasons to watch the show – from its timely message about how quickly false rumors can be taken as fact, to its excellent depictions of the tangled emotional relationships of siblings, friends, parents, and children – but the central love story is why it became an obsession for literally billions of people worldwide.

Dreadnought and Calamity – The Nemesis series by April Daniels 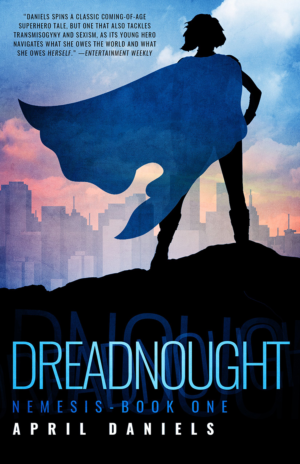 When Danny Tozer inadvertently inherits the name and abilities of the powerful superhero Dreadnought, she takes the opportunity to make her outer form match her inner self, exchanging her male body for a female one. She finds, however, that she has to face not only the supervillains who slew her predecessor, but transphobia from both her family and more than a few supposed superheroes, ranging from subtle snubs to outrage at her very existence.

She’s not without allies, though, and one of them is Sarah, a vigilante who skirts the edges of legality and goes by the name Calamity Jane – the Batgirl to Danny’s Supergirl. Their initial attraction is obvious, but it isn’t until the second book that it deepens into a (sometimes fraught) relationship. It’s worth the wait, though; you’ll be cheering by the time these two finally figure things out and get back to clobbering supervillains together. What’s more romantic than that? 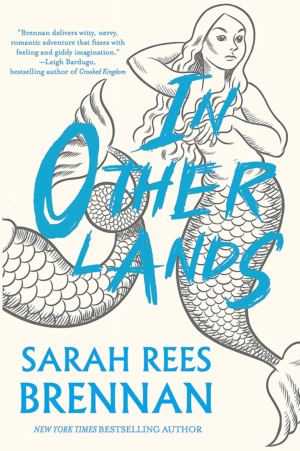 When thirteen-year-old Elliot Schafer passes through a portal into a magical land, he thinks it’s pretty stupid. A dedicated pacifist, Elliot is appalled that they’re trying to solve their problems with endless warfare, and are using teenagers as soldiers. What’s more, there’s this Luke Sunborn guy who reminds Elliot of every jock who ever picked on him in school.

Elliot starts out just as obnoxious and immature as you would expect from a snarky teenager, and part of the joy of this book is watching him grow up over the years into still-pretty-snarky maturity. He finds he’s not wrong about everything, but he is wrong about Luke, who turns out to be a well-meaning, painfully private introvert with hidden depths.

This is not, however, a book where the hero finds his One True Love on page three; the bisexual Elliot has a variety of relationships, from one night stands to a long fling with the elven princess Serene-Heart-in-the-Chaos-of-Battle. But that means when he and Luke finally do make a go of it, it’s something based on a lot of history, friendship, and growth.

Adora and Catra – She-Ra And The Princesses Of Power 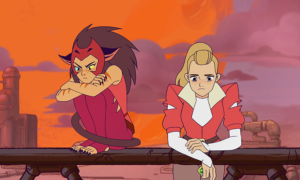 When I saw the blistering romantic tension between these two in the first season of the show, I was convinced that I’d have to stay content with a story told in subtext. It was, after all, a children’s cartoon, and a reboot of an Eighties property that had certainly never touched on queer content.

But I was wrong. Characters in children’s cartoons don’t get pushed into the closet as often as they used to be. In the years since Korra and Asami held hands and locked eyes in the finale of The Legend of Korra, we’ve seen Benson date Troy in Kipo and the Age of Wonderbeasts and Ruby marry Sapphire in Steven Universe (all contenders for this list).

Adora and Catra begin the show as best friends in the army of the evil Horde. When Adora changes sides and begins fighting on the side of good, Catra is livid at being abandoned. Their rivalry escalates until Catra nearly destroys the world from sheer pettiness – another moment when I was convinced that their love story was never going to happen. But She-Ra and the Princesses of Power is, ultimately, a show about redemption, and when it’s finally, painfully achieved, Adora and Catra share a kiss that not only confirms their love, but actually saves the universe. Now, that’s a romance for the ages.

Bleeding Hearts by Ry Herman is published by Jo Fletcher Books on 10th June. To be together at all, Angela and Chloë have had to overcome almost impossible odds, but their final obstacle might be insurmountable. Is there a solution, or is the divide between the living and the dead too wide for them to cross?