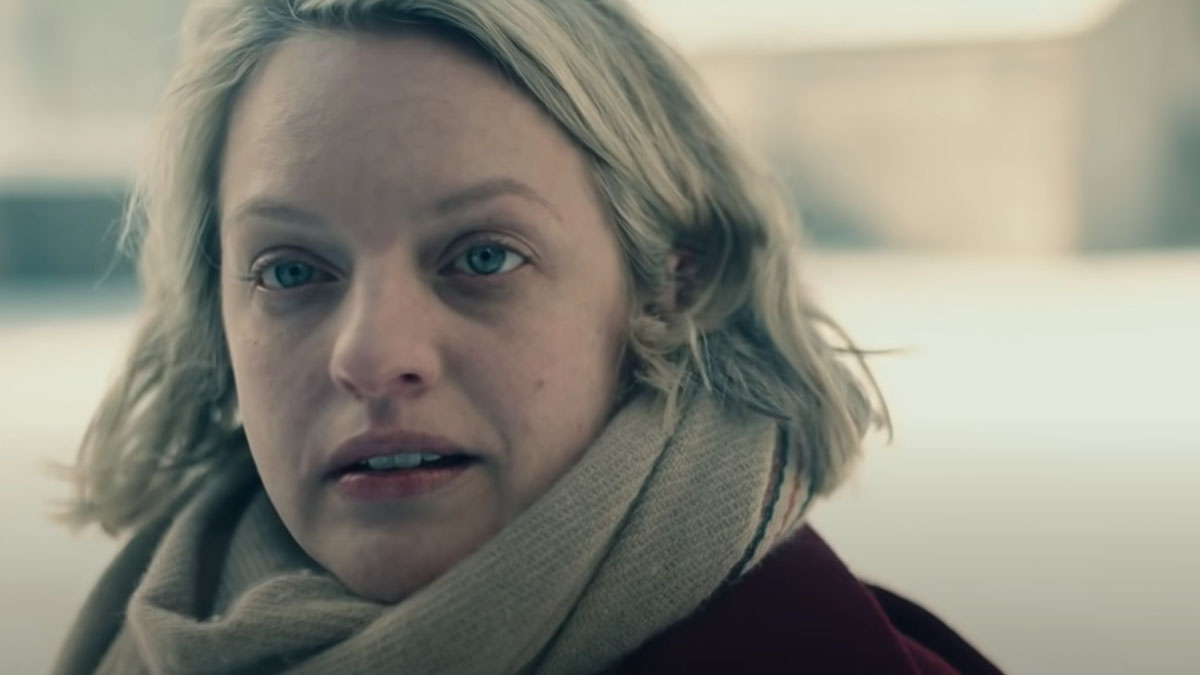 Was that the end of June and Nick? It felt like goodbye. When Nick told June to try to be happy, and then took his wedding ring out of his pocket and put it back on his finger, there was a sense of finality. Those two live in different worlds now and their across-the-barricades love faces impossible odds. Just look at the symbolic distance between them in that wide shot outside the school.

If that was the end, then The Handmaid’s Tale treated the couple to an idyllic farewell. The soft sunlight on snow, gentle piano score and June’s beaming face made for an uncharacteristically romantic interlude in this Elisabeth Moss-directed episode. Taken alongside their embrace on that bridge in episode three – the one filmed with that sweepingly passionate aerial shot and swelling orchestral theme – it’s clear how gooey the show feels about these two: they’re its big love story.

Ever since Nick became a Commander and military bigwig, the romantic lead has been an uncomfortable role for him to play. While he’s the head of a Gilead household and its army, it’s taken a good amount of wilful ignorance to keep him framed as this show’s heart-throb. Perhaps that’s why we only ever see him at work, and never his domestic set-up. As that wedding ring hinted, he must go home to child bride #2 and perhaps even his very own Handmaid. Maybe he refuses sex with his wife, as he did with Eden. Maybe he neglects to perform ‘The Ceremony’, as Joseph Lawrence did. But how long would Gilead let him get away with that? As we saw last season, the regime has ways to ensure that its Commanders fulfil their sickening duties. All of those discomfiting thoughts have to be swept under the carpet for The Handmaid’s Tale to present Nick and June the way it did this episode – as a pure romance, this show’s star-crossed lovers.

‘Progress’ was aptly named for June, who, having unburdened herself of the Hannah/prison story to Luke, and reunited with Nick, was truly happy for the first time in a long time. Her softness and inner glow this episode made the sadistic rage monster of ‘Testimony’ feel like a distant memory… until it re-emerged with twice the ferocity after Mark Tuello’s betrayal.

June’s strategic importance as an intelligence asset to Tuello has been highlighted ever since she set foot in Canada. As Moira pointed out, not every refugee has a special service detail or gets put up in a luxury hotel. Being the engineer of Angel’s Flight gave June power, which she was able to leverage this episode in the search for Hannah. An intelligence asset though, is only as valuable as the information they hold, and June had already given hers up. To Tuello, she’d served her purpose. When Fred Waterford offered to turn witness in exchange for immunity from prosecution, Tuello saw his next rung up the ladder. June, clearly, saw different.

June wasn’t the only one feeling betrayed in ‘Progress’. Deliciously, Fred Waterford was outraged when he learned that Gilead hadn’t lifted a finger to help him, as was Serena when she realised the real purpose of Naomi Putnam’s visit was to get first dibs on her unborn child. “Gilead could come for our son,” an incensed Serena told Fred without a hint of self-awareness. You can dish it out but you can’t take it eh, Waterfords? Stealing children is only okay when you’re the ones doing it. It was a neat reminder from this show that, as history teaches, those who build and support barbaric regimes often end up fashioning the noose for their own neck.

Enter: Aunt Lydia, whose cherished ‘daughter’ Janine was threatened this week by the very system Lydia enforces. To the other Aunts, Janine is a fruitful womb wasted scrubbing floors and serving tea. (Lydia’s enemies also see her as a sly route to hurting their boss, whose affection for Janine clearly hasn’t gone unnoticed.) To Lydia, Janine is a precious soul whose salvation is her responsibility. The push-pull tension of those scenes was captivating, every word a step taken in a minefield. When Janine argued Esther’s case, she stopped short of finishing the line “I just think she deserves a chance before you…” mutilate her like you mutilated me, but Lydia instantly yielding to Janine’s suggestion says that she heard it all the same.

It’s said that a way to survive a hostage situation is to pick another hostage to look after, transforming fear into protective strength. Maybe that’s what June did with Janine. Maybe that’s what Janine was doing with Esther (McKenna Grace giving another excellent performance) this episode. Listen to the pep talk Janine gave the former Mrs Keyes though, and you could hear it as Janine talking to herself. “Forget June, she’s not here, you have to take care of yourself now. […] You need to stay alive so you can be here when things get better.” Bless Janine for her optimism. For Esther’s sake, let’s hope she’s right.

A lot depends on Commander Lawrence, whose goal is still deliberately obscure. Is he working to make Gilead great again, or taking steps to bring it down from the inside? Perhaps that’s why the camera always films him from such obscured, high angles rather than the front-and-centre shots we see of June and Luke, because he and his motives are impossible to grasp. He told June that now wasn’t a good time for him to make waves – was that because his reinstated position is still recent, or because he needs to pass under the radar? Perhaps next week’s finale will tell.

The Handmaid’s Tale season 4 airs weekly on Hulu in the US and will air on Channel 4 in the UK in June.