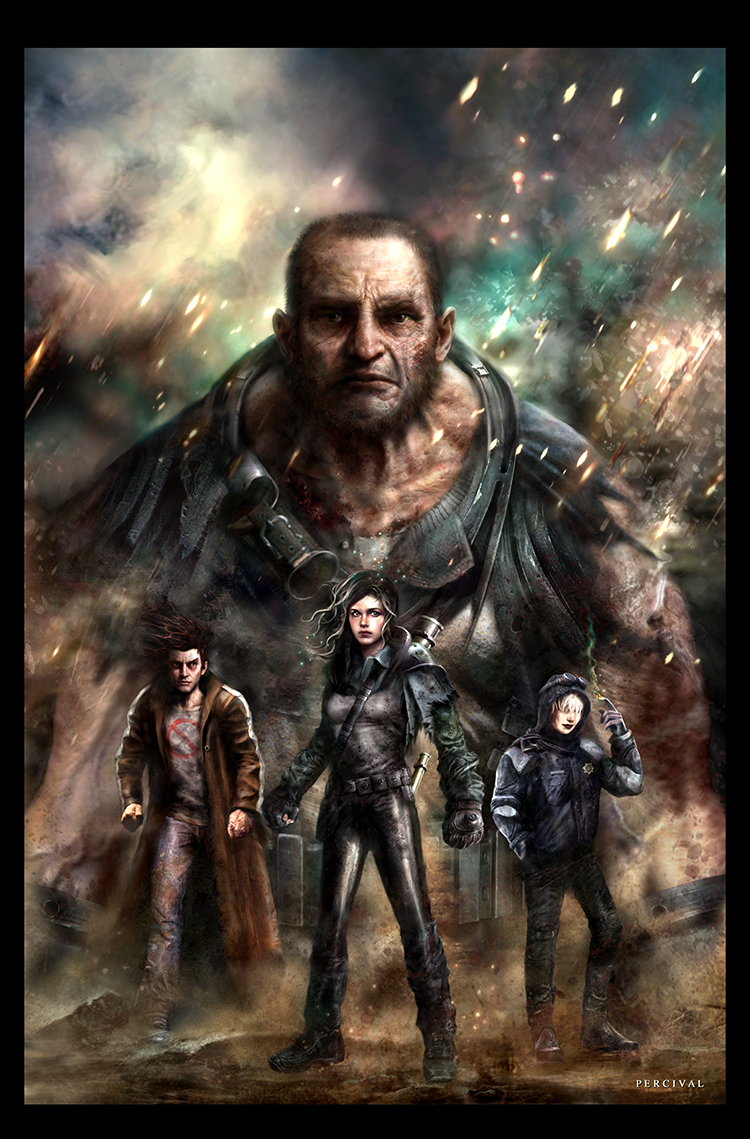 If you haven’t already heard, NFT marketplace Terra Virtua has just launched the world’s first NFT-only graphic novel – Bloodlines from Nick Percival (Judge Dredd and Slaine). The series follows the journey of four characters as they fight to survive in a disorientating and bleak world, which sees human emotions take on physical forms such as fierce rage storms and sweeping floods of tears.

Check out the trailer for the graphic novel here…

We sat down with Percival to talk about the series, working on Judge Dredd and how he feels about Bloodlines being available as an NFT…

When did you first get the idea for Bloodlines?

I think it was around 2012 that I started developing the idea, so it’s been kicking around my head for quite a while. I was working on it in between my regular comic book and film artwork projects. It was nice to able to take my time with it, initially creating a bunch of concept art so I could mess around with character designs and how I wanted to depict the world in which the story is set. Since it was something I was just doing for myself, there was no pressure or any time constraints, so I could just let the idea evolve.

If any, what were your inspirations when writing Bloodlines?

Bloodlines deals with a lot of themes I’d always wanted to explore – the effect of different emotions on people, the different moods we have and how they affect us. It got me thinking if these kind of things could be contagious, if we could somehow become ‘infected’ with different negative (or positive) emotions, character traits or feelings, just from being close to others and so on.

The next task was to think about how to represent that visually in an interesting and dynamic way within the genre that I like to work in and in my own art style. Of course, it’s also comics, so it has to be cool and entertaining!

Bloodlines sees human emotion take on physical forms – what are some of the physical entities we can expect and why did you choose them?

This was the fun part. I was thinking of phrases and definitions of how we interpret or represent these emotions and feelings. So, I would take some of this literally when I was creating the environments and creatures of the world. We have ‘Panic Attacks’ – swarms of bizarre looking entities that ‘attack’ and then overwhelm their victims, causing them to be crushed with extreme anxiety, way beyond anything you could experience in our everyday world. We have areas that are surrounded by ‘Floods of Tears’ – a dangerous and violent tidal wave of fluids, lethal to all who end up in it. Different emotional creatures such as ‘Deceit’ and ‘Despair’ are kind of ‘stealth’ entities – infiltrating communities, manipulating them from within. The list goes on but all this ties into the wider story and world I’ve created and this ongoing quest for things like ‘love’ and ‘empathy’ that now seem in short supply in this universe.

The dystopian future is obviously a bit of trope and can be an easy way to quickly establish a world , since people are kind of familiar with the ‘rules’ associated with that kind of setting but then you have to be careful not to fall into cliché, so I wanted to subvert that somewhat. I do have elements of that traditional kind of storytelling but as the story expands and with some flashback moments, we’ll discover that everything might not be as it first seems…

I’m a big fan of the author, Richard Matheson and his I Am Legend novel is one of my favourite pieces of fiction (the film versions – maybe not so much!).

You’ve also worked on established characters like Judge Dredd – is it easier or harder to work on characters you’ve created?

It’s easier to some degree since you have complete control over your own creations but then you also have to apply some self-discipline, as it can be very tempting to stay in your comfort zone and just do the things you like or find easy, so I tried to push myself with the storytelling and create some new visual techniques for the graphic novel.

It’s always fun to work on well-known and established characters like Dredd and Judge Death – I’ve actually just finished painting my third Judge Death epic series and am currently doing some new Judge Dredd, so I never say never to those guys – I love those characters.

Bloodlines is the world’s first NFT-only graphic novel, can you describe to us what that is?

Yeah, this is new territory for me and the industry. Bloodlines will be an exclusive digital NFT, available through Terra Virtua. NFTs (non-fungible tokens) are ‘one-of-a-kind’ assets in the digital world that can be bought and sold like anything else you own. Artwork (or in this case, the graphic novel) is ‘tokenised’ to create a digital certificate of ownership. A record of who owns what is stored on a shared ledger which is the blockchain. So, anyone that buys an edition of Bloodlines has it forever, can watch as it potentially increases in value and can trade or sell just like you can with any traditional comic book. It’s just another format of selling, buying and owning content, whether that’s comics, art, film, music, 3D collectibles and so on.

Why did you want Bloodlines to be available as an NFT?

I could have gone and was originally looking at the traditional publishing route but I’d been working with Terra Virtua for some time, building a good relationship with them and looking at their unique technology and the exciting plans they had for the future in this space and more importantly what could be possible now. It seemed like a great fit to bring Bloodlines over to this area, to try something new and shake up the comic industry a little bit. The NFT format and particularly the original dedicated comic book reader that they’ve developed for this release opens up a whole new avenue of possibilities for comic book storytelling. I’m a big fan and collector of all comics’ related stuff, so I have traditional comics, digital comics and now the world’s first original NFT graphic novel with Bloodlines.

Bloodlines will also be available as a collectable, complete with extras and easter eggs – can you give us an insight on what some of those extras are?

Yeah, this is where the cool part of the tech kicks in and we’re still only the early stages. For example, in some editions of the Bloodlines graphic novel, you can strip away the painted art pages without word balloons, down to the artwork as it was originally created, right down to all the original pencil artwork underneath. We have animated cover artwork, special FX elements in the art and all manner of extras in there including videos, teasers, etc – it’s like the ultimate Blu-ray special edition. As things evolve and as I’m developing the second volume, I’m really going to dive deep into all this for ways to enhance the story for the reader/viewer – stuff you can’t do in traditional comics. It’s an exciting time to be a creator.

What are you reading right now?

I don’t read quite as many comics as I used to since I don’t have the time but I still try and keep up to date (I have a massive collection and used to be manager of a comic book store, so it’s always been something I’ve been into). I’ll always have a look at what Frank Miller does in the industry, people like Mike Mignola and so on. I’m really into Marvel’s Immortal Hulk series at the moment – a great horror take on the classic Marvel character – my kind of thing.

I’m busy working on a new Judge Dredd storyline at the moment and blocking out the second volume of Bloodlines as well as various film-related art projects. I’m also developing my own original film project that I’m hoping to get underway later this year, so it’s all storytelling as usual for the foreseeable future!

Bloodlines is out now. Visit Terra Virtua’s marketplace here to purchase a copy.

Close Encounters of the Fifth Kind Official Trailer
House of the Dragon: Teaser released for Game Of Thrones prequel
How Star Wars: Ronin Brings the Saga Back to Its Roots
Dune Director Says Blade Runner 2049 Could Have Ruined His Career
James Bond Is the Last Truly Cinematic Franchise
Warzone: Why Ricochet Anti-Cheat Has Fans Worried