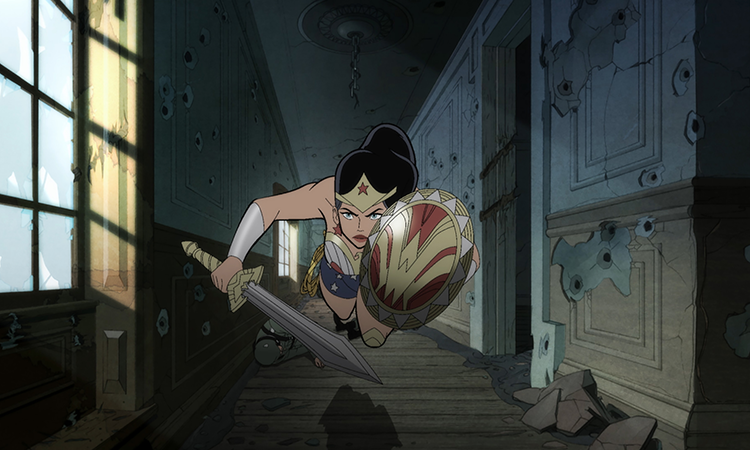 The Flash has a tendency to accidentally transport himself into varying time periods but when Barry Allen unintentionally finds himself smack bang in the middle of the second world war in Justice Society: World War II and among DC’s Golden Age of heroes (including Wonder Woman, the Black Canary, Hourman and even another version of The Flash!), not even his quick wit and scientific knowledge can get him out of his unfortunate predicament.

However, with a war raging on and a group of superheroes in need of some help to turn the tide back in the favour of the Allies, Barry has to overcome his own doubts (including whether to commit to his girlfriend Iris or fully immerse himself into superhero work) to help the Justice Society in their war against the Nazis.

Justice Society: World War II is the latest from the DC Universe animated original movies and with such a high pedigree of diverse and ground-breaking films behind it (including Superman: Man Of Tomorrow and Justice League Dark) the team are pulling out all the stops for its latest foray into the world of DC with an impressive cast of actors and filmmakers.

We spoke to one of those filmmakers, writer Jeremy Adams, who’s no stranger to DC’s iconic characters, penning (among many many others) this year’s Batman: Soul of the Dragon, as well as Teen Titans Go! Vs. Teen Titans and episodes of Green Lantern: The Animated Series.

How did it all begin for you with Justice Society: World War II?

Well, Jim Krieg and Butch [Lukic] are kind of the masterminds of DC animation right now. Jim and I have co-written a bunch of stuff together, so he called me up was like: ‘Hey, would you want to do something in this world?’ So Meghan [Fitzmartini] and I got together and came up with some ideas and batted it around with Jim and then it was just kind of organic.

The great thing is that animation is a super collaborative art form. I remember doing Green Lantern: The Animated Series – I wrote this episode and I got these notes back like ‘hey, you need to add a space worm’. I was like ‘that’s the weirdest thing I’ve ever heard’ and Jim gave me a piece of advice: “Listen, if a guy wants Hal Jordan to have a talking moustache, you write the best talking moustache!”

Then the episode came out and darn it if that space worm did not add a huge amount to the episode! It hit me like a shockwave. I work with professional artists and professionals that do this day in and day out, and what I learned is just to rely on those people and try not to have an ego about it. So Meghan and I, with Jim and Butch, just really tried to give these guys what they want to do, because if we can do that, then they’re going to do the best version of it. If they’re angry about it and they don’t want to do it, then it’s not going to look great. It’s how do we get those people that we collaborate with excited about the project? [Because] then it’s just going to be an even better project!

Did you look to any particular comic books for inspiration when writing the film?

I went back to some of the original JSA stuff and the Flash Of Two Worlds. But the reality is I’ve been an uber nerd since I was a little kid, so it all kind of seeps into your brain. I’m writing The Flash comic book now for DC and it is one of those funny things where I know more than I’ve forgotten. You have these relationships with these characters, and you’ve had these relationships with these characters for a long time, that when somebody puts the action figures in your hand you don’t have to ask questions about it, you know exactly how you’re going to play.

It’s the same thing with Meghan. Meghan is superhero nerd, and Jim… we don’t have to be like ‘oh yeah what’s that person’s powers?’ – no, not only do we know these powers. we know when they’ve lost these powers, and we know how they use the powers. So it makes it a little easier to write for.

The Flash accidentally time jumps back to World War II. Why send the Flash back to this particular time period?

It was always on the cards, mainly because it’s such a dynamic era of the personification of good versus evil. Also artistically there are some great visuals that you can pull from in that era.

It’s also a time in our world where there was a little bit of mystery and magic. At that time, [there was still] the old European maps of the ocean with ‘there be dragons here’. The world is fully explored at this point [but] there was still enough superstition and we know that Hitler was going after occult items. You can lay a story in there that feels like maybe this could be true.

I had a grandfather who fought in some very heavy fighting in World War II and they call it the greatest generation for a reason. What better way to illustrate the overall point we’re making about humanity being heroic? Humanity, even though it might cause death, stands for the things that bring life.

Was it fun to dig back into the Golden Age of comic book characters for Justice Society: World War II?

Yeah, it really was. Because budgets are limited and we don’t have that much time, we didn’t get to use everybody, [but that] has been nice as we take some characters, put them in there and explore them a little bit.

One of my favourites has always been Hourman. I feel like I could do a whole movie just about Hourman but it can only be an hour long… No just kidding. I would love to do that!

I think Hawkman is such an interesting character with that reincarnation angle but for me the thing that popped was Black Canary. That character really for whatever reason just popped off the screen for me.

Why did you choose these particular characters for the story?

We wanted to have more rough and tumble characters that are going to get into the muck and mire of war and these characters just seem to be the most accessible to that. Plus, Jay Garrick as The Flash and getting to play him off of Barry and explore what that means to Flash a little bit is really good!

Also, the older version of Wonder Woman I think really plays too. You see it in the trailer where somebody’s shooting a cannon at her, and she’s still walking and she just slightly moves her head. I was like ‘oh my gosh, there’s just so much panache and character in that moment, she is such a BA!” and you get everything about her in that. I love that.

It’s probably fair to say that the ending is pretty open-ended. Will there be a sequel to Justice Society: World War II?

We will see won’t we [haha]! That’s all I can say because like the Suicide Squad, [there’s] a button in which my neck explodes if I say anything more! So you know, I hope that we do get more opportunities to tell more stories…

Justice Society: World War II is out now on digital, DVD and Blu-ray.