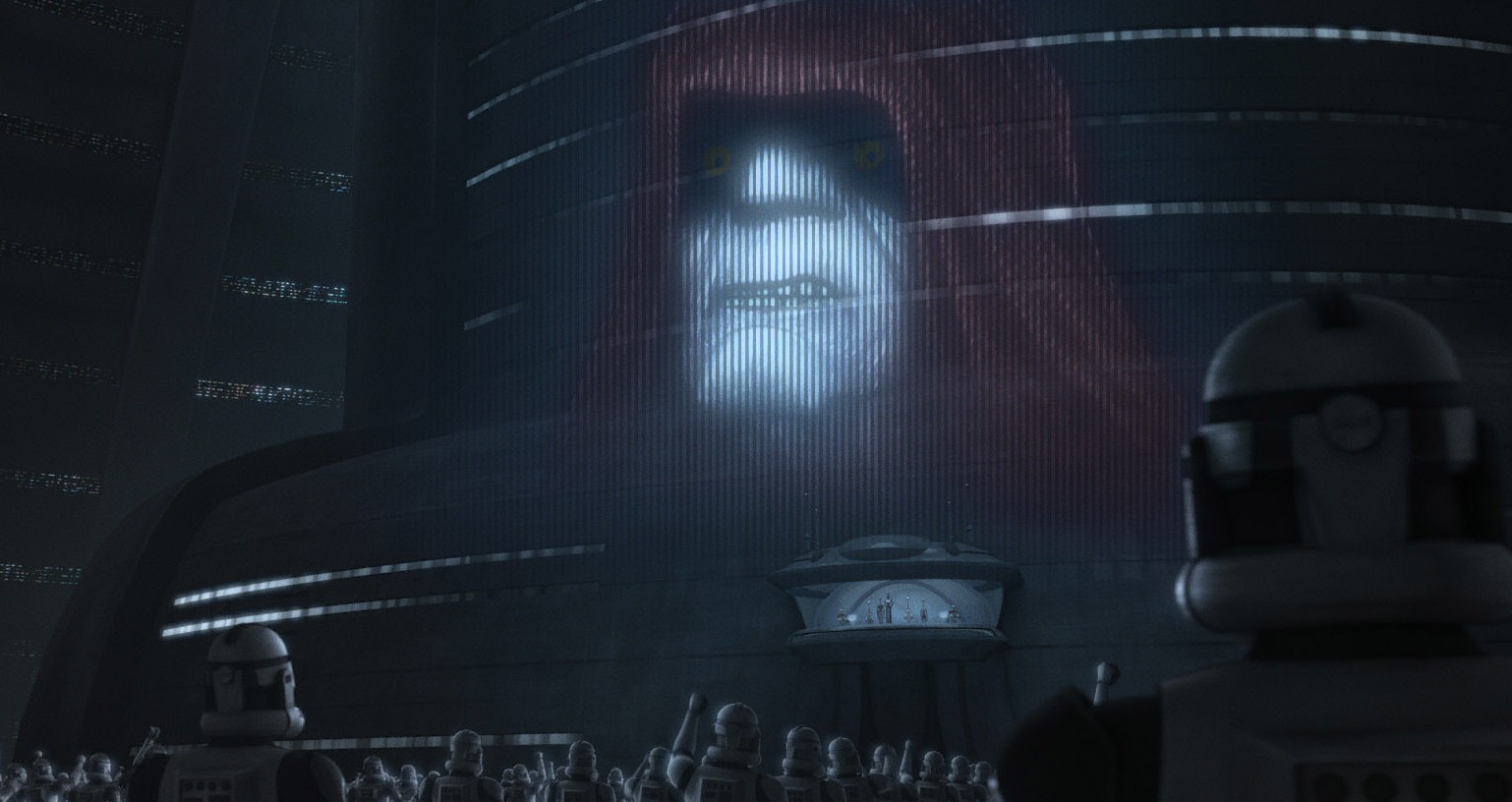 Star Wars: The Bad Batch, a new animated series and spiritual successor to The Clone Wars, bridges the gap between the Prequel and Original Trilogies. Set during the rise of the Empire, the show brings in elements from both eras, and is positioned to explore fan-favorite characters and settings in ways you haven’t seen before.

“Aftermath” features a few major cameos, as well as some minor ones. Let’s break down all of the big cameos in the episode as well as what they mean of the characters and the the show.

The Bad Batch kicks off its story with a very surprising cameo. Just minutes before the clones are instructed to execute Order 66, we meet Caleb Dume, the young Jedi padawan who will one day become Rebel hero Kanan Jarrus. Returning for the cameo is original Kanan voice actor Freddie Prinze Jr.

Speaking to us over Zoom ahead of the show’s premiere, producer Brad Rau explained that it was series creator Dave Filoni who came up with the idea to bring back Caleb, along with his master Depa Billaba, in order to explore Order 66 through “a Jedi dynamic between master and padawan.” Recording the scene was very emotional, according to Rau.

“In the booth we had tears on both sides of the glass, and I think you can feel it when you see Hunter at the waterfall. When you see Hunter have his instincts be to help this kid, not a mission parameter but to help this kid, it takes him from that point to later where he decides to go back for Omega. We wanted it to not come out of nowhere but for it to track to this journey and what he does later.”

Indeed, Hunter’s decision to disobey orders in the opening scene will later lead him and most of the Bad Batch to defect from the Empire and carve out their own path. And while Hunter can’t save Caleb during Order 66, he gets a second chance with Omega.

As for Caleb, the scene is a moment of change for him, too. Order 66 will not only force him to go into hiding and eventually change his name to Kanan Jarrus but it will inform his distrust of clones and reluctance to teach Ezra Bridge the ways of the Force on Rebels. He also never saw Depa Billaba

“Aftermath” gives fans the chance to relive one of the biggest moments in Revenge of the Sith, as a horribly scarred Supreme Chancellor Palpatine appears before the Senate to re-organize the Republic into the Empire. In the movie, we watch this scene from Senators Padme Amidala and Bail Organa’s perspectives.

“So this is how liberty dies…with thunderous applause,” Padme says to Bail in the scene. Indeed, members of the Senate are elated to hear that the Clone Wars are finally over and that Palpatine’s new galactic government will usher in “a safe and secure society.”

On The Bad Batch, we watch this scene via a hologram being broadcast to the Clone Army on Kamino. The mind-controlled clones who have just wiped out their Jedi generals cheer alongside the Galactic Senate. Only Hunter and his squad seem skeptical of this new Empire.

The scene establishes exactly when the animated series takes place on the Star Wars timeline: it’s smack in the middle of the third act of Revenge of the Sith, and right at the beginning of the Empire. Things will only get more grim from here.

Freedom fighter Saw Gerrera first appeared in The Clone Wars, as the leader of a resistance trying to push invading Separatists off of their lush jungle home world of Onderon. Gerrera later became one of the few Star Wars animated characters to make the jump to live-action, appearing as a supporting character in Rogue One, played by Forest Whitaker. The extremist freedom fighter has most recently on Rebels and the video game Jedi: Fallen Order.

In “Aftermath,” The Bad Batch are sent on a mission to kill Gerrera and the group of AWOL Republic soldiers who have defected from the new Empire. Despite having fought alongside the Republic during the Clone Wars, Gerrera quickly realizes that Onderon traded one invader for another. He won’t be kneeling for the Emperor any time soon.

Gerrera offers Hunter and the other clones some vital wisdom at a moment of transition. The Bad Batch can either fall in line with the Empire and eventually get shelved by Tarkin or they can adapt and survive. By the end of the episode, it’s clear the Bad Batch have chosen the latter.