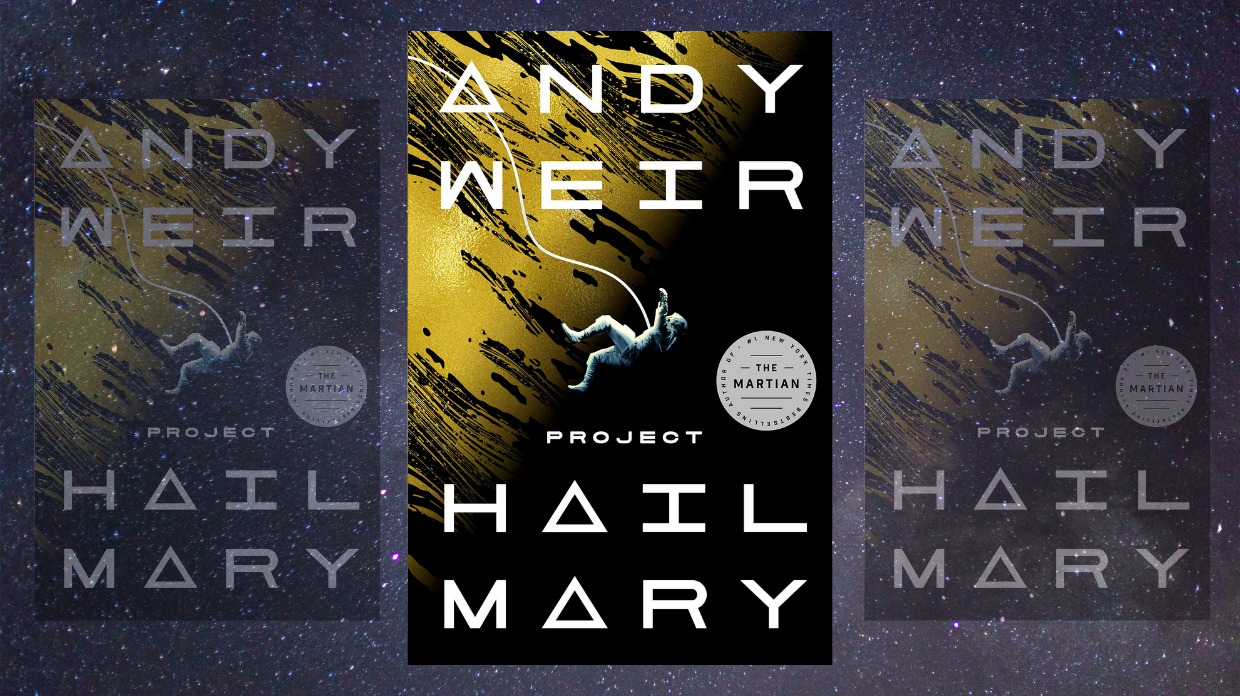 Andy Weir is all about survival. His first novel, The Martian, centers upon the attempts of astronaut Mark Watney to survive long enough on the Red Planet for a rescue mission to reach him. His sophomore book, Artemis, is a fast-paced survival story of a different kind, set among various criminal factions on the Moon. His latest novel, Project Hail Mary, raises the stakes even higher— it’s about the survival of our entire species, and all life on Earth.

In Project Hail Mary, the Sun is getting dimmer, thanks to a mysterious substance known as Astrophage, a type of interstellar infection. Humanity is facing a ticking ecological time bomb; unless the secret of the Astrophage can be discovered and the planet-wide cooling process reversed, it’s goodnight for life as we know it. There’s just one long shot left for humankind: send a starship to make contact with whoever – or whatever – is behind it all.

Project Hail Mary is as much a mystery novel as it is an SF survival tale. The book opens with our protagonist, Ryland Grace, waking up in a medical bay with two corpses and no memory of how he got there. What follows is a constant peeling back of layer after layer of this mystery, until finally, the truth is revealed. It’s a deeply satisfying ride, made even more so for those readers who share Weir’s obvious passion for science. Surprisingly, at its heart, Project Hail Mary is also a buddy road trip story, which kicks into high gear when Grace connects with an alien partner he names Rocky.

After bonding over a shared love of Terry Pratchett, Andy and I talked about the influences behind Project Hail Mary, and what it took to bring the world of the Astrophage to life.

Den of Geek:  Project Hail Mary evokes similar feelings to the Robert A. Heinlein juveniles, and Arthur C. Clarke’s Rama books. Were those influences for you?

Andy Weir: Oh, big time. I grew up reading my dad’s science fiction collection, Heinlein and Asimov and Clarke, they’re my Holy Trinity. And yeah, that sense of optimism I feel has kind of vanished from sci-fi, and a lot of science fiction ends up being this bleak, dystopian misery-scape where a teenager doing weird stuff is the only thing that’ll save the day. I just don’t buy into that. I have a firm belief that the future is almost always better than the past. I mean, 2020 kind of sucked, we can all agree, but I would rather live through 2020 again than 1920.

Speaking of 2020, let’s talk about the Astrophage, which is basically Project Hail Mary’s nemesis. It’s a stellar virus, an infection transmitted from star to star. Did you plot the book during the Covid-19 pandemic, or was it just a fluke of timing? It seems like a very timely concept.

It does, but it’s pure coincidence. I actually finished the entire book before COVID-19 happened. This is the longest I’ve ever had a book done, but not yet published, because COVID messed with the print production pipelines. I actually finished the book in January of 2019. Astrophage was originally a technology called black matter, not a life form. It would absorb all electromagnetic radiation that hit it, and turn that energy into mass, in the form of more black matter. I thought, this is the perfect spacecraft fuel, because it mass converts. Then I thought, “Well, we have no way of creating that technology, I could not make that take place in the modern day… what if it wasn’t a technology? What if it was a life form?” Black matter takes energy and makes more black matter, but that’s kind of what life does, right? Humans take energy and make more humans out of it. That’s what we do. Cats take energy to make kittens.

It’s the ultimate double-edged sword. It has the power to wipe us out, but if we were smart enough to harness it, Astrophage could become humanity’s gateway to the stars.

That was my…kind of “shower epiphany.” I was thinking, “Oh, but we’d need to be really careful, because we wouldn’t want to let this shit get in our sun, because it would start breeding out of control. That’d be a disaster. We can’t have that.” Then I was like: “Wait a minute, disasters are where books come from. We can have that. We will have that!” Astrophage was… I can’t say handed to humanity on a silver platter, it was really more handed to humanity on a spiky, poisoned platter.

Yeah, they did, and they’re not wrong. I still think that in the real world, our best bet for regular interplanetary travel is going to be ion propulsion, which requires a huge amount of energy, and so that’ll be reactors. This isn’t weird, way off in the middle of nowhere, made up science; this is real stuff. Humanity has put ion propulsion craft into space and used it, but if you scale that up big enough that you can have a passenger spacecraft, then you’re going to need to scale up the energy production. So, pretty much nuclear reactors are the only way to get that much energy out of such a small amount of weight.

The novel has a very non-traditional structure, essentially starting at two different time points, and unfolding from there in tandem. Was Project Hail Mary a difficult book to plot?

It wasn’t difficult to plot once I decided to use that structure, but it was a very difficult decision to go for that structure. I hate flashbacks. I always tell aspiring writers: “Don’t use flashbacks. Nobody likes them.” One of my main problems with flashbacks is, I’ll be really invested and interested in a story that’s going on, then suddenly we’re off somewhere else. We were over here doing neat stuff, now you’re over here doing boring stuff. This is a book, it’s entertainment, not a lesson. So, flashbacks often feel to me like you’re out playing with your friends and your mom tells you to come in and clean your room.

But I realized that this story, if told linearly, would be really weird. The whole scientific mystery which leads to the creation of the Hail Mary, and then the launch, is interesting, but it’s not a book… and so the flashbacks skip over the years. There’s this scene, and then the very next flashback you see will be two years later after that. The whole book would be really disjointed. From the second act on, it’s a completely different book. And so, I couldn’t think of any way to do this other than flashbacks. I’m like, “If I neat out the backstory bit by bit so that the stories kind of converge, and I’m constantly revealing new information in the flashbacks, then the flashbacks are compelling as well,” and just had the two stories come together at the end.

If this had been poorly executed, it would have been a very difficult read, but I felt no jarring at all due to the jumping backward and forward in time. I found myself looking forward to the next flashback, then getting back to the Rocky and Ryland show.  I was also delighted to find there’s a lot of humor in there.

People don’t know it when they start the book, but it’s a buddy cop movie, basically. I don’t know if you watched those road movies from the ‘40s. Bob Hope and Bing Crosby will be on the road to something. There’s a bunch of movies that start with Road to…and then a location. It’s always the same principal plot, these two guys are trying to get somewhere, and all the funky, comedic things that happen along the way. It’s kind of like that.

So, Phil Lord and Christopher Miller, the team behind The Lego Movie among many others, have been tapped to direct the Project Hail Mary Movie.

MGM bought the rights, and they bought them outright, not an option, which is neat, because it implies they’re much more serious about making the movie. Ryan Gosling is attached to play the lead, so that’s pretty cool.

I have some ideas for that, but I don’t want to give them away, because there’s been a lot of discussion on how do we portray the [alien] language situation on screen. In the book, after a while, I just start using italics to indicate what Rocky’s saying, and either Grace is looking it up on his computer, or later in the book has just learned Rocky’s language, learned how to understand what Rocky’s saying. We have an idea, and I think it’s a really solid idea. Ryan Gosling came up with it, and so I think that’s what we’re going to do. But films are so security conscious, I can’t really talk about it.

It was great talking with you, Andy, and I wish you the very best of luck with Project Hail Mary.

Project Hail Mary hits the shelves on Tuesday, May 3rd.