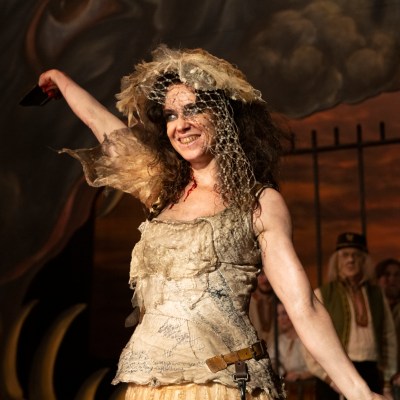 This article contains spoilers for THE NEVERS episode 3.

On paper, the idea of a steampunk superhero show that mixes period-set grittiness with ladies punching things seems like it should be a slam dunk. After all, most narratives about people gifted with sudden superhuman abilities are really just stories about power in fancier than usual dress. Shows like these examine who traditionally possesses power, who is allowed to wield it, how it is often used to prop up the privileged that already have it.

And where better to explore these issues than Victorian England? The foggy nineteenth-century streets of London work so well as a frequent backdrop for stories that explore magic or other otherworldly themes – think Penny Dreadful, The Irregulars, and Carnival Row – precisely because this is such a fascinating, specific time of transformation. Innovation spreads through the worlds of science and industry at a speed that often feels indistinguishable from magic. And despite the strict, traditional societal limitations imposed on the female populace, a woman sits on the throne of England and rules in her own right. Surely anything is possible – or should be.

That’s part of the appeal baked into the premise of HBO’s The Nevers, a story of a gang of (mostly) misfit Victorian women who acquire strange abilities thanks to a mysterious celestial event. In theory, or at least so this sort of trope usually goes, these women – marginalized and undervalued by the society they live in – gain the agency and freedom that has otherwise been denied to them thanks to their special gifts.

In actuality, The Nevers turns out to be something much more complicated and uncomfortable. (And not always in a good way.) Part of that is due to the generally icky feeling that the involvement of known dirtbag Joss Whedon leaves hanging over proceedings – and whether we like it or not his voice is glaringly apparent in these early episodes – but it’s also because The Nevers refuses to take the easy way out when it comes to its heroes, admitting from the jump that, for a lot of these women, just because they’re suddenly special, it doesn’t mean their lives are any easier.

If we’re honest, what most of us want when we look at The Nevers is a show where a marginalized and perennially disadvantaged group of people get their own power back, where women are given the ability to stand up against those who oppress them and literally fight the patriarchy. And though what we’re getting definitely includes a variety of scenes in which lead character – and primary wrangler of the Touched – Amalia True (Laura Donnelly) gleefully punches people, The Nevers never pretends that achieving women’s empowerment by way of giving female characters literal powers is a panacea for a world so thoroughly steeped in misogyny.

One of the most interesting – or frustrating, depending on how you view this twist – aspects of The Nevers is that while the Touched are all given a variety of special abilities, most of their “turns” are actually kind of lame. Amalia can see the future – sort of – but her “ripplings” come in random spurts and feature brief snippets that are most easily recognizable after they’ve already happened. Her partner Penance Adair’s (Ann Skelly) ability to see potential energy helps her build cool gadgets, but it’s hardly what you might call an especially active or splashy ability. I mean, I guess she invented the electric car? So that’s cool, I guess. But I still can’t tell you what’s up with the villainous Maladie’s (Amy Manson) powers, though they appear to be tied up in her experience of pain if the fact that her eyes glow gold whenever she’s repeatedly physically harmed is anything to go by. (Yikes?)

One young Touched girl becomes a polyglot, another grows to giant size, and both are powers that turn out to be awkward and limiting more than anything else. (Where are they finding these supersized dresses anyway?) For every Bonfire Annie (Rochelle Neil) who can literally generate flame, there’s a Mary Brighton (Eleanor Tomlinson), whose magical song is so specialized only a particular group of people can hear it and none of them know what it actually says.

Why give women power like this, if it’s not going to be the kind that can really change their lives? If all it achieves for many of them is a life of greater persecution, more pain, or even further degradation? Or if their powers, like Lucy Best’s ability to break the things she touches, kill a loved one by accident?

The Nevers seems to hint that the answer lies not in the individual abilities of the titular women but their collective togetherness and understanding of what it means to be other. Despite the fact that the Victorian era meant important progress for many people on many different fronts, women weren’t generally part of those groups. Yes, a woman’s on the throne of England for the first time in a century, but Victorian morality was highly repressive and a gulf of inequality separated both rich from poor and men from women. It’s not an accident that the show keeps pointing out that no one of “status” was gifted with Touched powers, nor that many of the residents who seek refuge in Amalia’s orphanage are also those who were already persecuted or discriminated against in some way.

In many (most?) other superhero stories, those who are gifted with special abilities tend to already exist in a space where power is familiar to them – Bruce Wayne, Tony Stark, and Charles Xavier are all already rich long before they become heroes. But The Nevers specifically elevates those for whom that position would be most alien and, in doing so, asks us to imagine a very different type of Victorian power structure. One that has space for the poor, for women of color, for sex workers, for immigrants, for those traditionally deemed hysterical or freaks.

The shockingly brutal murder of Mary, a kind young woman who tries to literally pull the Touched together with her song, reveals that there are plenty of elements in this new world that look uncomfortably and horrifyingly similar to the old one. But the aftermath of her death not only serves as the catalyst to bring dozens of Touched women out of the shadows, but it also makes them all just a little bit less helpless than they were before – by uniting them as a group. Granted, they’re unlikely to form a Victorian X-Men with matching corseted uniforms anytime soon, but Amalia, Penance, and the rest are certainly on the road to becoming something greater together than the pitiable unfortunates Lavinia Bidlow trots out to entertain tea party guests.

What that will ultimately look like and how this group will choose to deploy their powers to protect and help their own is anyone’s guess. But whatever happens, The Nevers seems uniquely positioned to explore a radically different interpretation of what having superpowers could mean – for those who’ve never had much of anything at all before.

Close Encounters of the Fifth Kind Official Trailer
Discovery of huge Raman scattering at atomic point contact
The Conjuring: The Devil Made Me Do It and the Perils of Taking on a Real Life Murder
Parallel universes cross in Flatland
HKBU and Cornell University develop novel targeted therapy for breast cancer with nanotechnology and Chinese medicine
House of the Dragon Photos Offer First Look at Thrones Prequel Characters