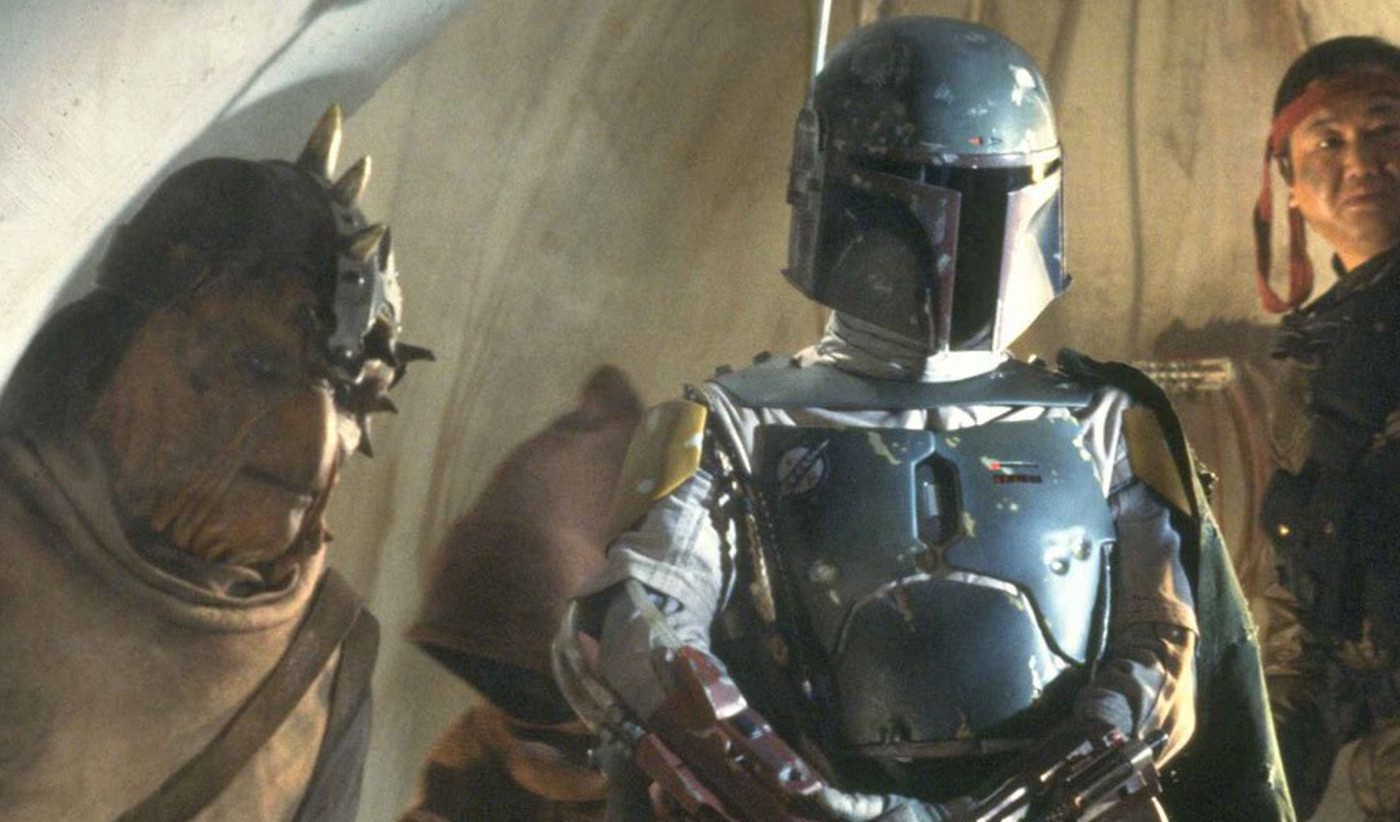 From the very beginning, Boba Fett has inspired The Mandalorian. Showrunner Jon Favreau’s “toy box” approach pitched protagonist Din Djarin as a Boba Fett-like figure, and although the two are quite different in terms of personality and history, the iconic silhouette of the space western gunslinger is very similar.

But now Boba Fett himself is back in The Mandalorian season 2, played by none other than Temuera Morrison in a very brief cameo. At the very end of the season 2 premiere “The Marshall,” we find Boba watching from a hill as Mando rides off with his old armor, a scowl on the old Mandalorian’s face that would silence a krayt dragon. With all the Mandalorian history and bounty hunting on the show, it was only a matter of time before we finally got to see Boba in the flesh!

Stream your Star Wars favorites on Disney+ with a FREE TRIAL, on us!

While new Star Wars fans may not be as familiar with Boba Fett, fans who’ve spent hours rewatching the Original Trilogy of movies likely let out a shriek when Morrison hit the screen on the live-action series. The helmeted bounty hunter first appeared in the Star Wars Holiday Special in animated form, but more famously in The Empire Strikes Back as a mysterious figure able to talk back to Darth Vader without consequences. Although he’s barely on screen and speaks very few lines in Empire and Return of the Jedi, his iconic look and intimidating swagger have made him one of the most popular characters in the saga. Most Star Wars fans will recognize his iconic T-visored Mandalorian helmet, jetpack, and gauntlets that can shoot either missiles or ropes for capturing bounties alive. His entire storyline in the Original Trilogy involved hunting down Han Solo for Jabba the Hutt, and he’d fit right in The Mandalorian’s Bounty Hunter’s Guild.

Morrison isn’t the original actor to play Boba Fett: that’s Jeremy Bulloch, who wore the helmet in the Original Trilogy. Other people helped bring the character to life, too. John Morton filled in as body double for Bulloch and Jason Wingreen provided the voice. But Morrison played Jango Fett in Attack of the Clones and is, therefore, the live-action face for all of Jango’s clones, including Boba. This is also why George Lucas later dubbed Morrison’s voice over Wingreen’s performance for the DVD release of the Original Trilogy in 2004.

Unsurprisingly, Boba Fett’s return has sparked a lot of talk among fans, who will likely spend the entire season theorizing how the bounty hunter was able to escape his fate in Return of the Jedi and what his arrival might mean for The Mandalorian. Let’s discuss…

Why Is Boba Fett Returning in The Mandalorian?

Disney has already tried to bring Boba Fett back to live-action twice since it purchased Lucasfilm and the rights to Star Wars in 2012. In 2015, Fantastic Four director Josh Trank was attached to direct a Boba Fett movie that was originally going to be announced as a third Star Wars Story standalone movie, along with Rogue One and Solo. According to an interview with Polygon, Trank “quit because I knew I was going to be fired if I didn’t quit” after Fantastic Four‘s dismal performance and the well-known behind-the-scenes drama during production.

The Boba Fett project was revived in 2018, with Logan director James Mangold set to helm the movie, but this second attempt was also shelved after Solo‘s tepid turn at the box office that same year. Simon Kinberg, Rebels producer and Dark Phoenix director, would have co-written the movie.

In 2020, The Mandalorian provides perhaps the best re-entry point for Boba Fett. Not only does it star a main character with a similar occupation and a taste for carbonite, but it delves deeper into Mandalorian culture as well as what happened to places like Tatooine after the fall of the Empire. Even though Boba Fett isn’t Mandalorian by blood, the fate of Mandalore could still affect him personally, especially since his father was a member of that culture, even if Jango was treated like an outcast by the planet’s pacifist government. Would Fett still be an ally of the Empire after what they did to his father’s people?

The show first teased the return of Boba Fett in the season 1 episode “The Gunslinger.” That episode ends with a mysterious figure inspecting the body of Din Djarin’s latest target on Tatooine. When does this moment take place with respect to Fett’s timeline? Has he just escaped the sarlacc or has he spent the years since Return of the Jedi as a hermit in the desert? Has he been following Din’s tracks all along? The cameo seems to confirm Boba’s hermit status, as we see him wearing black robes and carrying a rifle as his own protection. (He very likely wants his armor back.)

But has he also been tracking Mando? When it comes to a bounty as big as the one on Din and Baby Yoda‘s heads in season 1, there’s no doubt that the greatest bounty hunter in the galaxy would have heard about it. And if the underworld has forgotten him after he was swallowed whole by the sarlacc, what better way to reclaim his reputation than by collecting the bounty no one else could?

That’s not to say that the bounty hunter has definitely returned as a villain. For one thing, this could just be a cameo or perhaps the very start of an arc that will see Boba following our heroes around, waiting for the right moment to reveal himself.

However Fett’s story plays out, it could set up future adventures for the character, just like the ones he had before Disney erased the classic Legends continuity from canon.

How Did Boba Fett Survive the Sarlacc Pit?

Fett’s death in Return of the Jedi wasn’t the end for the bounty hunter in the pre-Disney Legends continuity. In fact, he lived a long life that stretched decades beyond the events of the Original Trilogy. But how did he survive a fate as gruesome as being slowly digested over a thousand years inside of the sarlacc?

Fans learned in the classic Dark Horse comic series Dark Empire by Tom Veitch and Cam Kennedy that Fett’s armor allowed him to survive inside the sarlacc and fight his way out, blowing up the creature in the process (a move very similar to how Mando escaped the belly of the krayt dragon in “The Marshall”). The novel The Mandalorian Armor by K.W. Jeter further explained that it was rival bounty hunter Dengar who found Boba Fett half-dead in the desert and nursed him back to health.

From that point on, Fett became a regular character in the Legends Expanded Universe, featuring in many bounty-hunter focused books. He also made a brief cameo in the 19-book New Jedi Order series and appeared in the Jedi-focused Legacy of the Force and Fate of the Jedi books. In fact, Fett lived on until the very end of the Legends timeline, completely defying the odds after his initial demise in Return of the Jedi.

Boba Fett eventually became the leader of the Mandalorians, which had a sprawling culture and even their own official language in Legends. Fett had a family and his granddaughter ended up assisting in the training of Jaina Solo, Han and Leia’s daughter.

As in the Sequel Trilogy, Legends included the continuation of the Skywalker-Solo clan, and, while Fett mostly kept to himself as the leader of a third faction sometimes opposed and sometimes allied with the Republic, he was involved with incorporating Mandalorian fighting into Jaina’s Jedi training. He also became a formal ally of the Jedi in the war against Jaina’s brother, Jacen Solo/Darth Caedus, in Legacy of the Force.

Will the Disney canon do something similar with Boba Fett’s post-Return of the Jedi story? We don’t know what the studio might have in mind for Fett, or whether he will eventually turn into a more sympathetic anti-hero character, but it wouldn’t be surprising if some elements from his Legends storyline were brought into the new canon. That’s exactly what Disney did with Grand Admiral Thrawn, another character whose Legends story was pieced together in a new way in the canon animated series Rebels.

Boba, as we all know, isn’t a traditional Mandalorian — he’s a clone. He wasn’t born on Mandalore, he wasn’t connected to a traditional cultural/religious covert like Din Djarin in The Mandalorian, and his father Jango, a killer willing to sell his clones to the Republic, doesn’t exactly seem like a traditionalist in the vein of the Armorer or Mandalorian leader Bo-Katan Kryze.

There’s certainly some kind of cloning plot being woven into The Mandalorian. In season 1, Ugnaught hero Kuill suggested that Baby Yoda could be a “strand-cast,” a type of bio-engineered clone that Emperor Palpatine hoped to use as the perfect vessel for his spirit after his original body was destroyed in the Battle of Endor. We know that Dr. Pershing, an Imperial scientist, wanted to experiment on the Child before Din decided to rescue him. Was Baby Yoda part of the Emperor’s plan to find a new vessel or a clone of Master Yoda the Emperor planned to turn to the dark side?

Or is Baby Yoda the result of a separate strand-cast experiment that worked where so many of the Sith’s failed? If this is the case, the Empire would undoubtedly want to see how the Child not only survived the cloning process but also became powerful in the Force. As we learn in The Rise of Skywalker, the Emperor’s own clones were all massive disappointments on that front.

What if Boba Fett is hunting Baby Yoda for what’s left of the Empire? Would they feel any sort of affinity toward each other if they’re both clones, or would Boba Fett be the cold-hearted killer to Din Djarin’s heartfelt foundling? The potential clone connection could make for a captivating storyline in season 2.

Fans certainly have had a lot of time to come up with opinions, headcanon, and theories about the bounty hunter. Fett speaks sparingly and radiates intimidation, even if his most famous role features him falling into a large pit. Attack of the Clones and The Clone Wars added to Fett’s backstory and showed him learning the ropes of the bounty hunting trade. All that could be paid off in The Mandalorian, depending on how the show incorporates Morrison now that he’s made his return.

The Star Wars franchise has been in a rather uncertain place since the Disney purchase, with movies doing well at the box office but cultural cache falling. The Mandalorian is one of the most unquestionably successful and high-quality parts of the franchise right now, so it’s a good business decision to bring a very popular character to the show. We’ll see what that means for the story.