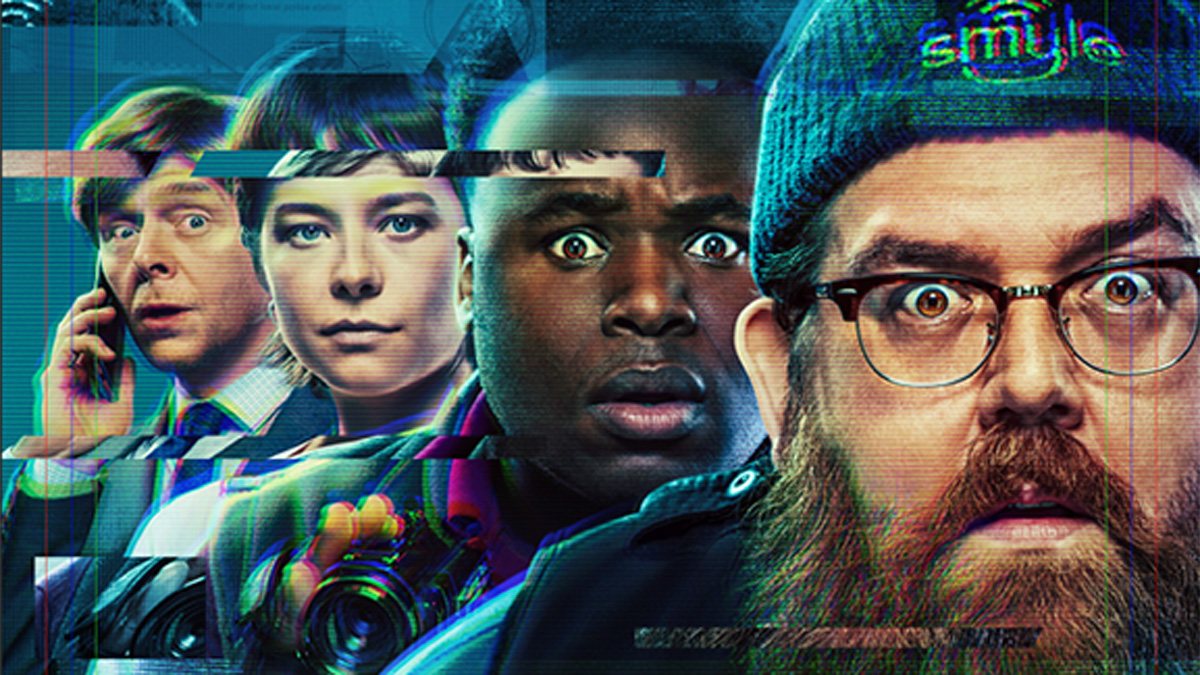 When most of us love something – a film, a band, a football team – we express that love by wearing the t-shirt or getting a tattoo. When Nick Frost, Simon Pegg and their mates love something, they express it by making a feature film trilogy. Or a cult 90s TV series. Or eight-part comedy-horror Truth Seekers.

Truth Seekers, co-created by Frost, Pegg, Nat Saunders and James Serafinowicz, is the product of fandom. It’s a bundle of admiration for horror in all guises, from the shonky DIY of Most Haunted to cultivated glitch and found-footage movie scares, to the recently revived anthology tradition. It has a go at recreating it all, tipping its hat so often that it can’t quite juggle the rest of its ambitions because its hand is already too full of hat.

For a half-hour comedy, its ambitions are towering: build a Scooby Gang ensemble each with their own emotional backstory, introduce monsters-of-the-week in a carousel of changing locations, create an ongoing mythology arc with a Russian doll of baddies, wrap up character arcs while leaving threads open for a potential second series, and on top of all that, provide gags.

It’s too tall an order, and the laughs are the first casualty. Truth Seekers’ jokes rarely raise more than a smile, but at the current time, who can afford to take smiles for granted? This whole show has been made with such affection for the horror genre that, despite the comedic shortcomings, it warms you. The result is a pleasant oddity – closely packed weird ideas and a winsome cast driven by Nick Frost’s unflagging nice guy energy.

Frost plays Gus Roberts, a broadband engineer with his own paranormal YouTube channel – The Truth Seeker of the title – and a past bereavement. Gus lives with dad Richard (Malcolm McDowell, clearly having fun at the back) in an atmosphere of benign neglect and insults. At work, Gus is reluctantly paired with newbie Elton (Samson Kayo), a youngster he inducts into the world of ghost-hunting.

Also in the ensemble is Elton’s sister Helen (Susan Wokoma), another YouTuber and agoraphobic sci-fi fan whose cosplay would be competition-winning, if she could ever actually attend a competition. On their rounds, Gus and Elton stumble across Astrid (Emma D’Arcy), a young woman in need of their help. Julian Barratt, Kevin Eldon and Morgana Robinson, as well as a few other nice surprises, round things out. It’s a likeable cast of oddball characters and feel-good, familiar faces.

The broadband installation premise is a useful one that keeps Gus and Elton on the road, visiting a series of locations each with their own ghostly tales. Boss Dave (Simon Pegg) is the Charlie to their angels, sending them out on daily missions around the country. Pegg’s largely static role keeps him at a distance from Frost’s peripatetic character, which will disappoint anybody hoping for more of the pair’s Cornetto Trilogy chemistry. Truth Seekers isn’t in that world. If you want a comparison, it’s closer to goofy alien road movie Paul than Frost and Pegg’s Edgar Wright-directed collaborations.

As you’d expect from these creators, it’s drenched in pop culture homage. The biggest tribute is to Frost and Pegg favourite The X-Files, which lends Truth Seekers its serialised-with-overarching-mythology structure. The stories-of-the-week are gradually revealed to be more than just curiosities, and combine to feed into a single narrative that culminates in an against-the-clock race to defeat a villain.

It makes for an awful lot of story. The 25-minute episodes have a staggering amount of mythology to explain, which forces each script into spending more time on exposition than jokes. Promising stabs at pathos aren’t allowed enough space in the edit, and the end product feels somewhat out of breath and hyperactive.

Is it scary? Sometimes. More, it does an excellent impression of something scary. Director Jim Field Smith (The Wrong Mans, Episodes) and co. pay inventive tribute to countless horror conventions and occult tricks, as well as referencing movie favourites including The Shining, Close Encounters of the Third Kind, They Live… Take a drink every time you see a nod to a genre classic and you’d be falling over by the halfway point.

If love is about noticing the small details (and – as proven by those terrible ‘your wonky eyebrows, the way you laugh…’ lists at the end of rom-coms – it is), then Truth Seekers is above all else a declaration of love for the spooky and paranormal. It doesn’t all work, but it’s hard not to be won over by the sheer enthusiasm.

Truth Seekers is out on Amazon Prime Video on Friday 30th October.