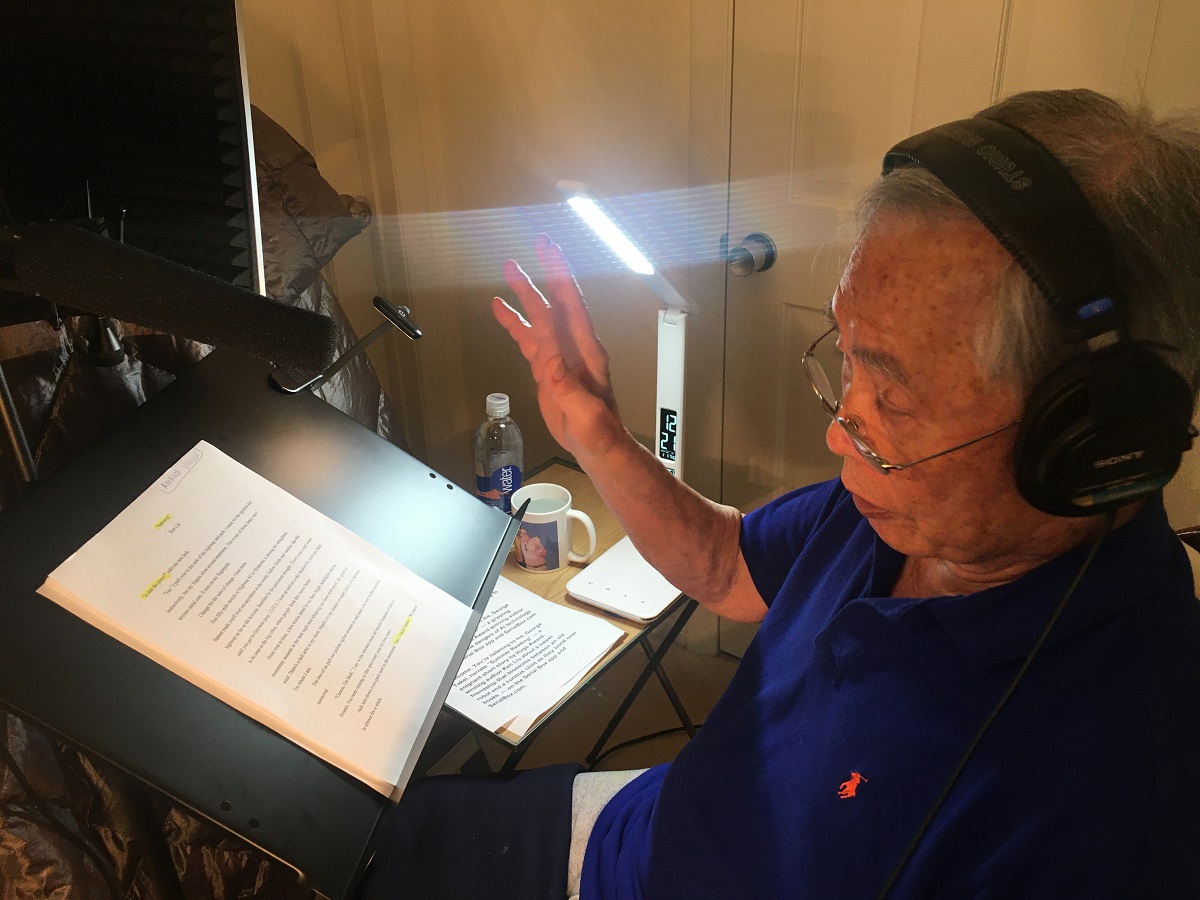 George Takei has lived through cataclysmic times, but he’s never given up his hope for a better future. You can see this sense of hope in his choices of projects, whether it’s the vision of Gene Roddenbery in Star Trek or in his most recent project, narrating two stories by Ken Liu for Serial Box.

“Many of my friends are saying, ‘This is cataclysmic, what we’re living through. It’s dystopian, everything being destroyed, this is the end of the earth,’” he says. “I tell them, ‘No, we go through many cataclysms.’ And I tell them about my childhood.”

As a child during World War II, Takei’s family was taken to Japanese Internment Camps. At five, he thought living in the swamps of Arkansas, surrounded by barbed wire and guarded by soldiers, was a great adventure. For his parents, it was sheer cataclysm. Forced from their home at gunpoint, their assets frozen, their business taken away—the world had turned upside down, and the justice system had failed to live up to its central principles.

After the bombing of Pearl Harbor, American citizens—and their government officials—were terrified, and they expressed that terror by enacting laws that called born citizens and children alien enemies.

“The president who, during the 30s, said ‘There is nothing to fear but fear itself,’ pulled the nation out of that crushing Depression,” Takei says. “But when the nation was swept up in that hysteria, he was stampeded by that fear.”

Takei’s memories of growing up in two internment camps is retold in the graphic novel They Called Us Enemy, which received the Eisner Award for Best Reality-Based Work. “That was a cataclysm I grew up in,” he says. “I saw my parents after the war work long days and long nights to get back on their feet.”

Takei also recalls the unrest of the 1960s, when he was in his twenties. The Civil Rights movement was met with violence and lynching; the Vietnam War divided the United States in half. Demonstrations were met with gunfire; the president, the attorney general, and Civil Rights leader Martin Luther King., Jr. were all assassinated.

“It was a turbulent time,” he says. “Chaos. We survived that, too.”

Gene Rodenberry’s optimistic vision of the future was one of the things that Takei embraced about the original Star Trek series. “I love Gene Rodenberry,” he says. “He’s an artist, creator, and a dynamo that I admire. Anything that is inspired by the works of Gene Rodenberry, I would love to do again.”

When asked if he’d be interested in continuing his voice work for a project like Star Trek: Lower Decks—or any other Star Trek project—he laughs. “I’ve been hoping ever since my last Star Trek,” he answers, even if he feels the more recent Star Trek projects haven’t quite lived up to Rodenberry’s vision.

“The people who have inherited Star Trek as producers and writers really sometimes have not listened to Gene Rodenberry,” he says. “They’re more action-adventure in space, [where] Gene wanted to use sci-fi as a metaphor to comment on our society. He thought television was being wasted—it was a wonderful medium to communicate with a lot of people.”

In Takei’s most recent project as a narrator for two of Ken Liu’s science fiction stories, now available on Serial Box, he offers a sense of both hope—and resistance—in sharing Liu’s words.

The Star Trek legend was first contacted by Serial Box, through his agent, with the idea of having him narrate the pieces. “I loved the stories when he sent them over,” Takei says. Serial Box is known for pairing prose with audio productions that include voice, music, and sound effects. The stories were Takei’s first introduction to Liu’s work.

“This has been a wonderful introduction for me,” he says. “I’m going to have to start catching up on my Ken Liu.”

“Saboteur” is a tale about a trucker trying to fight against the automation of his job, resisting the encroaching technology with unexpected results.

“Summer Reading” is about a girl interacting with a robot, discovering the joy of reading paper books. In both tales, Takei performs a number of voices, clearly distinguishing the characters for the listener.

“The fun part, really, is the preparation, the trial and error,” he says. “You go through the fun of preparation. When you’re recording, time is limited. I had the chance to only read it twice—two stories, each read twice.”

Due to the coronavirus pandemic, Takei created his own “cubby hole” home studio for the recording, piling up couch cushions, and hanging a rug and a comforter, to absorb any external sounds. Once the recording is complete, “They pick and choose the sentence that’s better,” he explains, calling the whole process a collaboration, and particularly highlighting the work of Amanda Rose Smith, Head of Audio Production at Serial Box.

The Serial Box team adds sound effects after the fact, such as trucks along the highway in “Saboteur” and the sounds of the robot walking in “Summer Reading.” The latter he described as a “klump, klump—I didn’t quite expect my robot to be klumpy,” he jokes. “I expected him to be more aerodynamic. The klump is so old-fashioned.”

They also added a reverberation to his delivery of the robot’s lines. “I didn’t know they were going to do that, but I thought, ‘Oh, how wonderful!’”

Describing his experience as both a narrator and a reader, Takei says, “The two stories are wonderful complements of each other.”

In the first, “It’s man against technology, and technology is encroaching on man’s turf, but man is also capable of defending his turf. Essentially he wins, but he also loses.”

“Technology, machines, have absorbed the essence of humanity, of respecting and treasuring heritage, compassion, and sharing. These are all essential human qualities,” Takei says. “The humans have become unfeeling consumers, but there’s a glimmer of hope in that young human, and the robot shares a little bit of that, and they connect. It fills the robot with joy, but it’s also mindful of the danger of sharing this precious heritage with this innocent and un-understanding young human. So it wins as this humanoid machine, but it knows that sometimes, it’s going to eventually lose…those two stories together are like the yin and yang.”

The stories have a distinct resonance to current events. Originally published in science fiction periodicals in 2012 and 2014, both stories feel remarkably relevant in an era where so many have lost jobs to the coronavirus pandemic, and where many children are attending school on screens, rather than in person. Readers and listeners might identify with the idea of resisting something that seems inevitable, as the main character does in “Saboteur.” They may also find hope in listening to the risk taken by the robot in “Summer Reading,” who believes humanity deserves a chance to remember its best values.

Like the robot, Takei is hopeful and optimistic that the current turmoil in the United States will have an ending.

“I’ve lived through periods of incredible cataclysm. So I know that, as horrible as what we’re going through right now seems … we will survive,” he says. “We will reach another point where we have some order, some peace, creativity, advances in our society. Maybe two steps back after we’ve taken three steps forward. And then we’ll take more than three steps. That’s why I’m optimistic. When you are defeated by the chaos going on, you are defeated, because you can’t see beyond it. Pessimism, negativism means that you’ve already defeated yourself. But just like that robot in ‘Summer Reading’ … [it] connects with the possibility, with the glimmer of hope, the optimism, and [it] takes that risk.”

In listening to Takei narrate the risks of hope and resistance in Liu’s stories, perhaps readers can capture that glimmer of hope, too.

“Saboteur” and Summer Reading” are available through the Serial Box app or at SerialBox.com.

Close Encounters of the Fifth Kind Official Trailer
Vigil Episode 5 Review: You’ve Got Some Nerve, Agent!
Could the New Pokémon TCG Live App Bring Retro Pokémon Cards Back?
Squid Game: Best of the Cast’s Shows and Movies to Watch
The Many Saints of Newark Review: The Sopranos Prequel Has Cement Shoes
Endeavour Series 8 Episode 2 Review: Morse Haunted by Ghosts of His Past