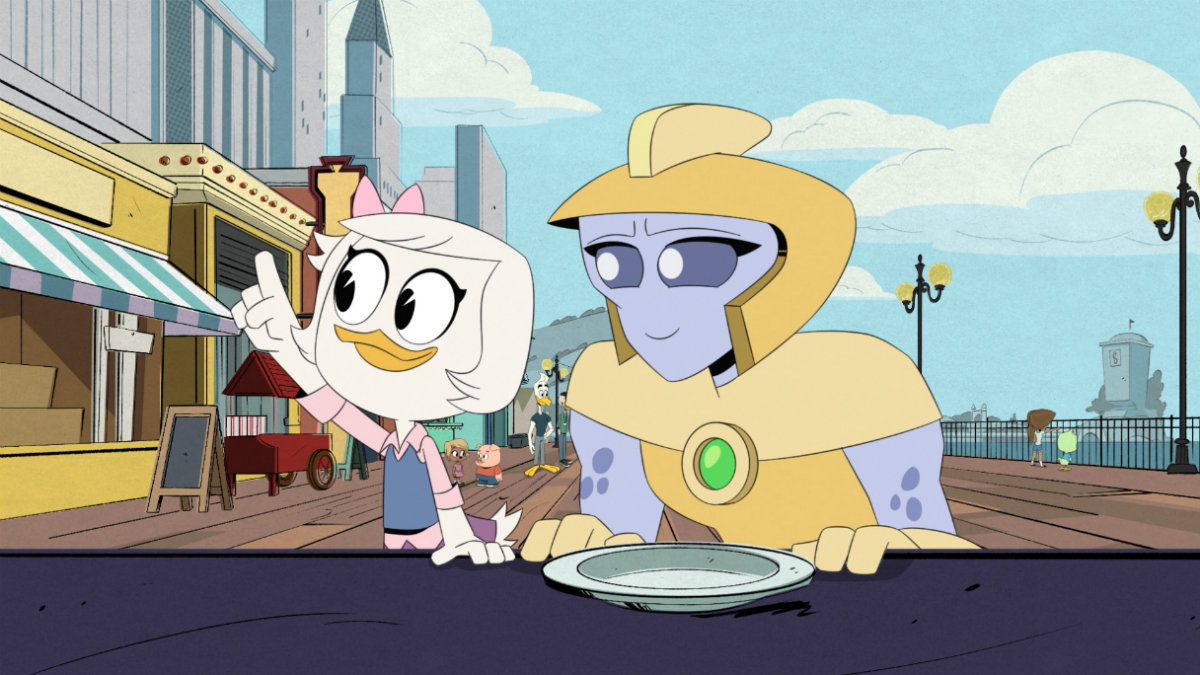 Every so often, from the moment a DuckTales episode begins, I have a gut feeling it’s going to be incredible. That it’s going to somehow reach beyond DuckTales‘ usual greatness. ‘They Put a Moonlander on Earth!’ gave me that feeling from its opening moments… yet somehow went even furthur than I could predicted. Its quality, ironically, was so high it hit the moon.

This episode is one of DuckTales’ best by far. Everything works about it. There’s so much going on but it never feels overstuffed. The jokes all land brilliantly, building on one another with expert precision. It balances nearly ten character arcs (small and large) throughout the episode and they all pay off masterfully. If anyone teaching a course about TV writing needs an example of perfect structure, this episode should be at the top of the watch list.

Penumbra, or Penny, is the center of this episode and she desperately wants to get back to the moon. She can’t stand being on Earth… unlike the rest of her people who’ve all quickly assimilated to human… Duck…. Whatever, life. (The gag with Dewey and Webby feeding Ducks made my brain short circuit so I’m glad the same happened to Penny as well.) What shakes her out of her moon focus is something so breathtakingly simple but still incredibly heartfelt. Her fellow Moonlanders didn’t invite her to a party.

THAT IS SO GOOD AND RELATEABLE. The fear of being left out will drive people to do anything and for Penny that means attempting to engage in Earth fun. She’s bad at it but that gives us a ton of amazing gags of her miserably failing at fun. The car bit was probably my favorite; Penny getting whacked in the face by a bird was pure gold.

All these jokes, in DuckTales fashion, lead to a powerful bit where Penny accidentally admits why she misses the moon. She was pretty much perfect there. She could protect her people. She understood how everything worked. Here on Earth, though? Things are different and she’s not the best anymore. She isn’t in control of everything. What is she without her identity from the moon? What’s her legacy?

Ah, the theme of legacy. The overarching theme of DuckTales season 3. It’s been a part of much of the season but it’s at its most effective here. Penny is scared by the future, scared of her new surroundings and wants to retreat into the familiar. It’s understandable but Webby is there to comfort her.

I’m not saying every episode of DuckTales is made better when Webby is there but you know, she always helps. She tells Penny about how, when she lived in the mansion, she was Webby: Expert On All Things McDuck. When she left though the world was scary and different. She wanted to go back to what she knew but with the help of Huey, Dewey, and Louie she was able to become more than that one thing. She became World Explorer Webby and Best Friend Webby! Crucially though, she says she’s still Mansion Webby as well.

This whole scene is just… it made me tear up a little, no lie! It’s a perfect way to show kids (and adults!) that just because you’re known for or see yourself as one thing doesn’t mean you can only be that one thing. You can be so much more; you can break out of the familiar and try new things.

I love this reaches Penny but one brain freeze seems to undo it. Webby’s words are powerful but the brain freeze was the perfect representation of the challenges and fears we face even after we try to break out of the familiar. It can hurt as much as a brain freeze does but that doesn’t mean we shouldn’t try.

In a masterful plot turn, Penny finally acclimates to “Earth Fun” by doing it in her own way. Playing carnival games isn’t exactly her style but roller-skating onto a crashing Ferris wheel to save Dewey and Webby? That’s her kind of fun! I adore that in this action Penny begins to adjust to Earth but doesn’t lose her desire to protect and help others. In this moment she’s Moon Penny and Earth Penny all at once.

We can’t talk about Penny in this episode without mentioning THAT line. When talking to Launchpad toward the end she says, “We are not enemies I just do not wish to date an Earth… male.” Combine that with the way Della was acting around her early in the episode PLUS writer/director/story boarder Sam King confirming it on Twitter? Folks, Penny is a lesbian!

First off, I LOVE IT! This is so good. Would I have liked for the show to say it out loud? Of course I would, but knowing this is a Disney animated series I can imagine the intense restrictions they’re under. Getting that line on screen is a victory and I appreciate King addressing that we won’t see much more of Penny this season. I appreciate that setting of expectations! But hey, Disney, let them say lesbian!

Penny’s plot made this episode next level but everything else was great to! Dewey’s desire to be involved in a Dewey Dew-saster was pitch perfect. You think his rivalry with Timmy Jenkins (love they always said his full name) is all in his head but then to get that twist at the end? Jaw dropping.

Launchpad’s imagined tension with Penny? So good! The best gag was him getting on the top of the car (WHILE IT’S MOVING!) and asking her if she’d rather one of the kids drive the car. We also now have the beautiful Launchpad and Penny friendship. More lesbians and straight guys being best friends! You love to see it!

And to top it all off there’s Glomgold! You can never go wrong with Glomgold. The fact he named his Ferris wheel “FLINT FERRIS GLOM WHEEL” is just genius. His back and forth with his new Moonlander pal he just can’t stay mad at gives us yet another DuckTales dynamic I desperately need more of. (When the biggest complaint I have about DuckTales is it has TOO MANY characters I want to see more of, that’s a good problem to have.)

Then there’s all the little details. Della being totally fine with Dewey putting his life in danger. Glomgold’s Ferris wheel model with macaroni. Penny calling Webby “Small Della.” The “Barrel of Monkeys” line. PENNY’S MUSIC MOTIF! Seriously, where can I get a clean recording of that? High quality FLC file. Vinyl, WHAT DO I HAVE TO DO, DISNEY?

Everyone involved in this episode deserves a raise, a medal, and awards. Sam King and Bob Snow for writing. Sam King, Francisco Angones, Colleen Evanson, Christian Magalhaes, Bob Snow, Madison Bateman, and Ben Siemon for the story. Sam King, Kathryn Marusik, Rachel Paek, and Stephan Park for the storyboards. Sam King and Jason Zurek for writing. You all are legends, particularly Sam King. Your love of Penumbra knows no bounds and thank you for giving us more of her. You’re a legend.

‘They Put a Moonlander on Earth!’ is all time DuckTales classic and rightfully belongs on any list of best TV episodes of 2020. It’s pure gold from start to finish with endless jokes and flawless character development. Plus, that Ducks feeding ducks moment will haunt me forever in the best possible way.

-“I must conquer Earth fun.”

-“Curse you me ferris me wheel!”