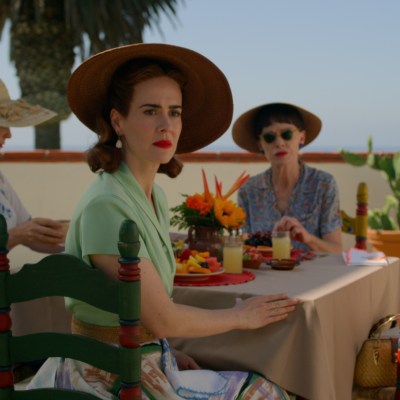 At this point, it’s no surprise when Sarah Paulson signs on to a Ryan Murphy production. The actress calls him her “greatest champion,” and he’s known for working repeatedly with the same stable of actors. Paulson is a clear talent, a name that has come to signify a show is “prestige” by her mere presence. But with Ratched, Paulson steps up in a new way, as an executive producer with decision-making power and as the titular character who carries the series, rather than a member of an ensemble cast.

During a virtual press conference about the show, Paulson opened up about her hesitations with making that leap, working with Ryan Murphy in a new context, and “stepping into her power.”

Paulson says she was “terrified” to step up in large part due to her lack of experience.

But she says Murphy, who created the show and directed the first two episodes, was insistent.

“He was very, very interested in empowering me in this way that I had never experienced before, even in the traditional structure of working with him,” she says. “What he would say to me, over and over again, was ‘Step into your power. Step into your power.’ And it literally makes me want to take a hot shower and run, screaming, into the street, to think about stepping into my power because I don’t really know what that means. But he does, and he would like me to do more of it.”

Paulson knows how rare it is for that kind of power sharing to happen on set, and she’s not the only one. Sharon Stone, who plays the wealthy and dangerous Lenore Osgood, reflected about the gender dynamic she normally experienced throughout her career.

“When I started working, it was me and 300 men. Even my dresser was a man. So, to come to work and have women cameramen and sound people and in every department,” Stone says. “I can do really strong work because I’ve worked with all these really big actors, and I didn’t have this opportunity to work in these fine, subtle, intimate, layered, tender work of women and to be in the company of women.”

Stone, who doesn’t usually work in television where it’s the norm to have multiple directors and scripts aren’t necessarily complete before filming starts, gushed about Paulson’s skill as an executive producer to keep track of the chaotic nature of the shoot.

“In my generation, I wasn’t afforded this possibility,” Stone says. “To watch Sarahhave this… It’s just so touching to me. It’s so meaningful to me. And that this man is doing this for women, that’s what Ryan Murphy says to me.”

The fact is that women in power behind the scenes is still incredibly rare. According to a 2020 report from The Center for the Study of Women in Television and Film, women account for only 31% of people working in key behind-the scenes positions in television, such as creators, directors, writers, producers, executive producers, editors, and directors of photography. It’s not hard to imagine the pressure that adds to the women who do hold those roles, something Paulson confronted with this project.

“It was a kind of interesting thing to confront my hesitation and to deal with all of those moments of ‘What does that look like for me?’ and ‘Am I capable? Am I ready? Do I want it? What does it mean if I do? Is that ambition?’”

Given what women face in the industry, a measure of imposter syndrome seems not only normal, but a rational response to so many signals saying you’re not good enough. Indeed, Paulson’s response resonated with castmate Sophie Okonedo, who plays Charlotte Wells, a patient with Dissociative Identity Disorder (formerly called Multiple Personality Disorder.)

“Sarah, when you said about the kind of complication you felt inside about stepping into your power, and I just thought, ‘I’m so happy to hear that you feel conflicted about that,’” Okonedo says. “To be able to sort of be publicly saying, ‘I have conflict inside me,’ is so refreshing.”

Paulson shared her experience working with Murphy as an executive producer, which took a little while for them to find a rhythm. Paulson says Murphy sent her cuts with his edits, looking for her input, and after her initial hesitation, she sent pages and pages of emails with notes.

“He said, ‘Okay, listen. Here’s the deal. You get to watch them before I get my first look at them, because then I start thinking about having to break all this shit down that I’ve already decided. And now I don’t know what to…’ So then I started getting the edits first,” Paulson says.

There’s still a long way to go before the levers of power reflect the rest of the industry or ever our world, but absolute forces like Paulson stepping into their power and being open about what that looks like surely feels like an important step.

“It was an interesting experience to think beyond my own narrow view of just my own performance and think about the show as a whole and what the story was.”