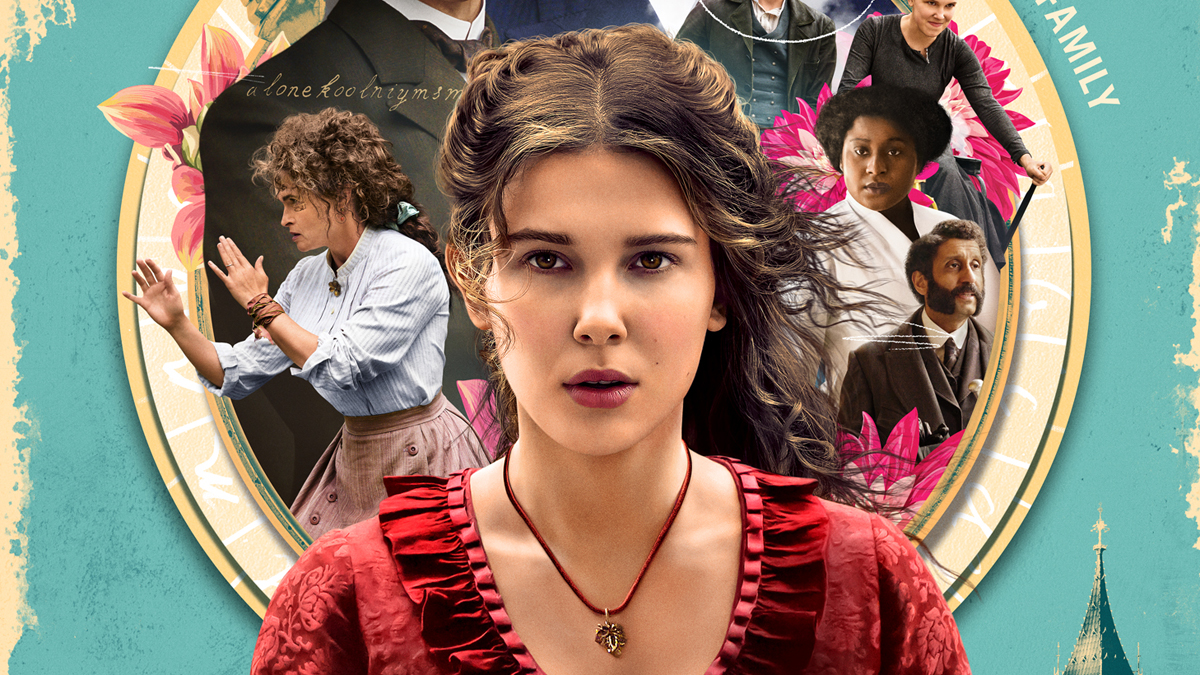 Netflix film Enola Holmes is a revolutionary parable about rejecting the status quo and choosing your own destiny. In it, Stranger Things’ Millie Bobby Brown plays the sixteen-year-old sister of Mycroft and Sherlock Holmes (Sam Claflin and Henry Cavill), a bright spark raised in splendid isolation by their mother Eudoria (Helena Bonham Carter) to think, fight and plot her own path through life. When Eudoria mysteriously disappears, Enola undertakes her first missing persons case and reconnects with her estranged detective brother along the way.

Based on the first in a six-strong series of YA books by Nancy Springer, Enola Holmes is a lively, if overlong, romp with a political heart and a charming central performance by Millie Bobby Brown. With plot spoilers, here’s a breakdown of the major action…

Why did Eudoria Holmes disappear?

Eudoria is a proto-feminist and activist for women’s suffrage (the right to vote). Left alone with a young child after her husband died and sons left home, she devoted the time until Enola was sixteen to equipping her daughter with skills and a liberal education. Then, confident that Enola could fend for herself, Eudoria went undercover as part of the resistance to fight to make the world a fairer place for women.

What was Eudoria planning to do?

First, she extracted money from her son Mycroft (who had inherited Ferndell Hall when his father died) on the pretence that she needed it for upkeep on the property and to maintain a raft of servants and instructors for Enola. Instead, the pair lived with a single housekeeper and Eudoria taught Enola herself, channelling the money to fund her activism.

The explosives Enola discovered in Limehouse Lane were presumably intended to blow up targets in London to protest the lack of women’s suffrage.

What was Edith Grayston’s Tea Shop?

A front for the women’s suffrage organisation to which Eudoria and Edith belong. Edith (played by Susan Wokoma) ran self-defence and Jiu-jitsu classes above the tea shop, an educational facility with “seditious, dangerous and extremely banned bookshelves,” as remarked upon by a visiting Sherlock Holmes.

Who was trying to kill the Viscount Tewksbury and why?

His grandmother, the Dowager, played by Frances de la Tour (perhaps best recognised by young audiences for the role of half-giant Madame Maxime in Harry Potter and the Goblet of Fire). Enola was right – a widow is a very handy disguise. A staunch conservative who opposed reformation in any form, the Dowager felt it was her duty as a member of the British landed gentry to preserve the family estate – and England – exactly as it was, and to stand in the way of progress. She explained as much to Enola on their walk through Bellwether House grounds.

The Dowager knew that her eldest son – the young Viscount’s father – was a radical who would use his vote in the House of Lords (the UK parliament’s second chamber, at that time filled solely by hereditary peers who inherited their titles, seats and power without appointment or election, with the power to scrutinise bills approved by the elected members of the House of Commons) to pass reform acts, therefore changing the status quo. She staged a burglary in which her son was killed, and then, when his similarly progressive son came of age and inherited the peerage, she employed an assassin to attempt to kill him too.

When the Viscount and Enola defeated the assassin, the Dowager shot her own grandson in the chest, telling him “I’m so sorry my darling. The future of the country is at stake.” He survived thanks to a hastily inserted chest plate from a nearby suit of armour during the attack, telling his reactionary grandmother “Your time is over.”

The Third Reform Act, or officially, the Representation of the People Act 1884, was introduced by Liberal prime minister William Gladstone. In simple terms, it gave the vote to many more British citizens outside of the wealthy gentry, and marked a shift towards a more democratically elected House of Commons.

Initially the House of Lords rejected the Third Reform Act, which gave Gladstone a battle and led to popular protest, but it was eventually passed in the Lords.

Previously, the power to vote in elections was only held by wealthy landowners in boroughs, not rural counties. The Third Reform Act extended the franchise (the number of people eligible to vote) to middle class landowners and working class agricultural workers paying an annual rent of £10. In combination with the Redistribution Act passed in 1885, which matched the number of members of parliament for an area to its population, making it more equitable, the Act made for a fairer and more democratic United Kingdom… for some. It did not grant the vote for women or 40% of men in the UK, who were non-landowning and non-propertied.

Who left Enola the code in the newspaper personal ad?

Sherlock, who deliberately included a hint that the message was from him and not their mother, as it purported to be, as a test for Enola’s deductive powers. When Enola passed the test (after also having solved the mystery of the missing Marquess before him), Sherlock asked to take responsibility as her legal guardian, which Mycroft gratefully granted.

What was the significance of ‘Dash’ the pinecone?

The wool-wrapped pinecone was Enola’s childhood toy, inspired by Queen Victoria’s spaniel of the same name. Enola had forgotten all about it, but her mother kept it underneath her pillow as a symbol of her affection for her daughter. Sherlock retrieved it and returned it to Enola as proof of their mother’s love, then Enola left it at the Royal Academy for Sherlock to find as a sign that she had cracked the code he’d left for her in the newspaper personal ad.

What next for Enola?

“I am a detective, I am a decipherer and I am a finder of lost souls. My life is my own and the future is up to us.”

Enola was left living in her own (much more salubrious) London lodgings, having earned a hefty reward from the doting mother of the Missing Marquess. She was no longer a ward of Mycroft, who’d wanted her enrolled at a suffocating finishing school, but the legal responsibility of Sherlock Holmes – in this incarnation of his character, her much more sympathetic and supportive brother. She was also in the early stages of a romance with Lord Tewksbury, and beginning life as a detective in her own right. Her mother Eudoria remained underground as part of the feminist resistance.

Will there be an Enola Holmes 2 sequel?

Author Nancy Springer published six Enola Holmes mysteries between 2006-2010, starting with this story, The Case of the Missing Marquess. That means, if Netflix, Millie Bobby Brown and the fans are up for it, there are several possible opportunities for a sequel adaptation. The next book in the series is titled The Case of the Left-Handed Lady and involves the disappearance of the aristocratic Lady Cecily Alistair…

Enola Holmes is available to stream on Netflix now.

Close Encounters of the Fifth Kind Official Trailer
11 Actors Who Could Be the Next James Bond
SCI-FI-LONDON 2021: What to expect and full programme
Halloween Kills Review: Michael Myers Movie is Filler But No Thriller
How Star Wars: Ronin Brings the Saga Back to Its Roots
House of the Dragon: Teaser released for Game Of Thrones prequel