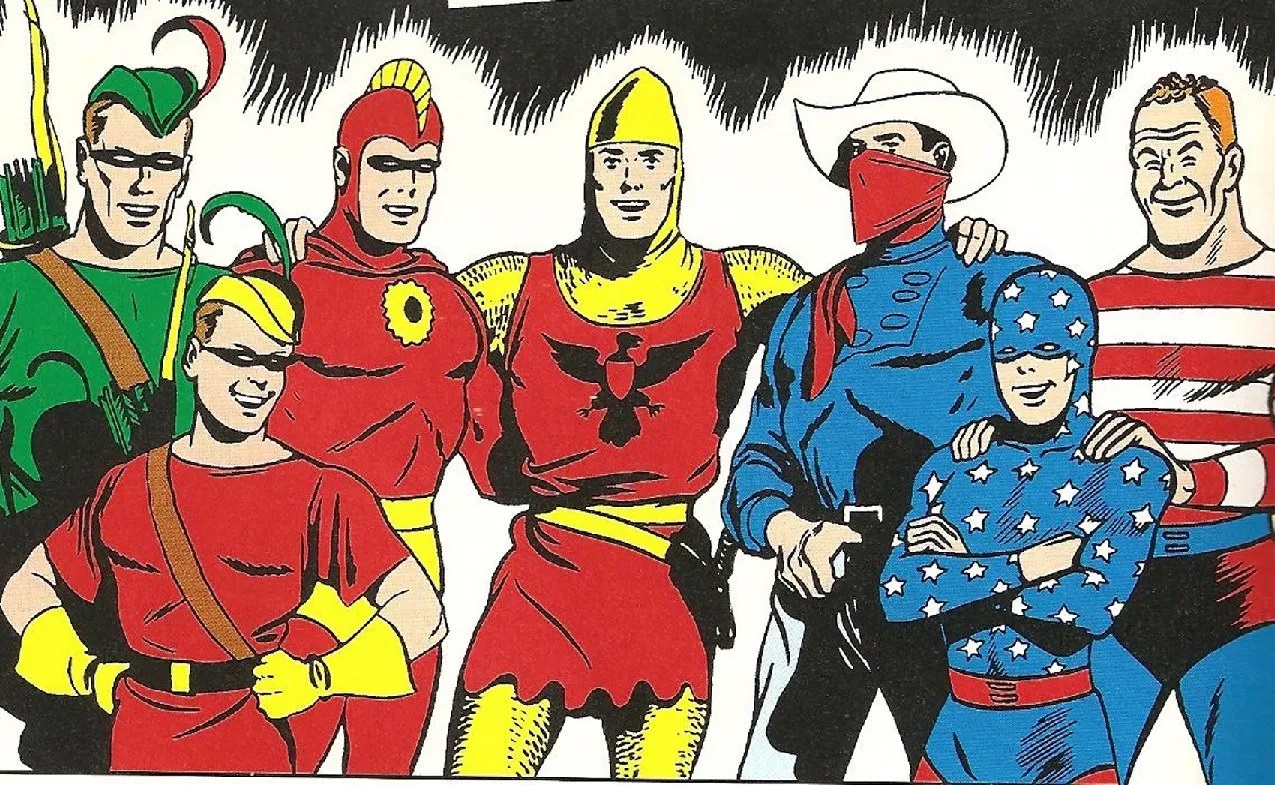 Stargirl continues to deliver some of the deepest cuts in DC Universe TV history to fans each week. Not only that, it does it with not a hint of irony about it, even when it’s presenting characters who, to modern eyes, might appear a little bit hokey if presented in their original form. The latest example of that comes with their revelation of the Seven Soldiers of Victory, a relatively obscure group of Golden Age superheroes who fought alongside the Justice Society of America back in the day.

The DC Comics version of the Seven Soldiers of Victory first appeared in 1941’s Leading Comics #1 by Mort Weisinger (who went on to become a legendary editor of the Superman titles during the Silver Age) and Mort Meskin. Having seen the success of the Justice Society in the pages of All-Star Comics, it was clear that another super team with some other heroes who didn’t have enough to do in their own titles could make for a solid headline feature for Leading Comics, and the Seven Soldiers were born.

The team never quite caught on with readers the way the JSA did, and slipped into obscurity after a few years, but were resurrected in the pages of Justice League of America in 1972. In a story that could potentially fuel a future season of Stargirl, the JLA and JSA need to track down the Seven Soldiers who have been scattered throughout history.

The name was revived for a Grant Morrison DC Comics event called Seven Soldiers, which showcased a very different Shining Knight, a new version of Jack Kirby’s Guardian, Mister Miracle, Bulleteer, Frankenstein’s monster (yep), Zatanna, and Klarion the Witch Boy. It absolutely rules and you should read it on DC Universe.

But the version of the Seven Soldiers of Victory we’re introduced to on Stargirl is very much the original/traditional model of the team. In “Brainwave,” once again, Pat Dugan is giving Courtney Whitmore a history lesson, and as is the source of so many great DC Comics Easter eggs on this show, we get an old black-and-white photograph featuring the heroes.

From left to right we have…

The Crimson Avenger and Wing

The Crimson Avenger pre-dates Batman as the first masked hero in DC Comics, first appearing in Detective Comics #20 in 1938. Essentially a knock-off of popular radio hero the Green Hornet, the Crimson Avenger was Lee Travis, aided by his sidekick Wing. The Crimson Avenger’s original costume is exactly what we see in this photo, but he later adopted a more traditional superhero costume. Here, Wing is wearing the costume he sported during the Crimson’s tights-and-cowl days, and they’re pretty similar.

In case you needed any additional proof that Stargirl doesn’t take place on the Arrowverse Earth-Prime, here it is. I’m not sure who that is in the Green Arrow suit, but maybe, just MAYBE there’s a tiny resemblance to a more clean cut Stephen Amell. Sorta. If you squint.

Nevertheless, here’s Green Arrow in a costume that is perfectly accurate to how he appeared in the comics of the 1940s, not to mention Speedy’s less than flattering red version of the costume.

Stargirl viewers may recognize the sword as the one belonging to Justin the janitor at Blue Valley High. It appears that each week Justin remembers more and more of his past as “Sir Justin.” It looks like the mystery of Sir Justin will come to a head in next week’s episode, which is appropriately titled “The Shining Knight.”

The Star-Spangled Kid and Stripesy

OK, obviously these two need no introduction, but this is only the second or third time we’ve caught a glimpse of Starman in his younger days, with a perfectly comics accurate (and less flattering) costume than the one we saw him rocking in the first episode.

No, not the Arrow villain! The Greg Saunders version of the Vigilante was created by Mort Weisinger and Mort Meskin in the pages of Action Comics #42 in 1941. He was just a traditional Western character until he joined up with the Seven Soldiers.