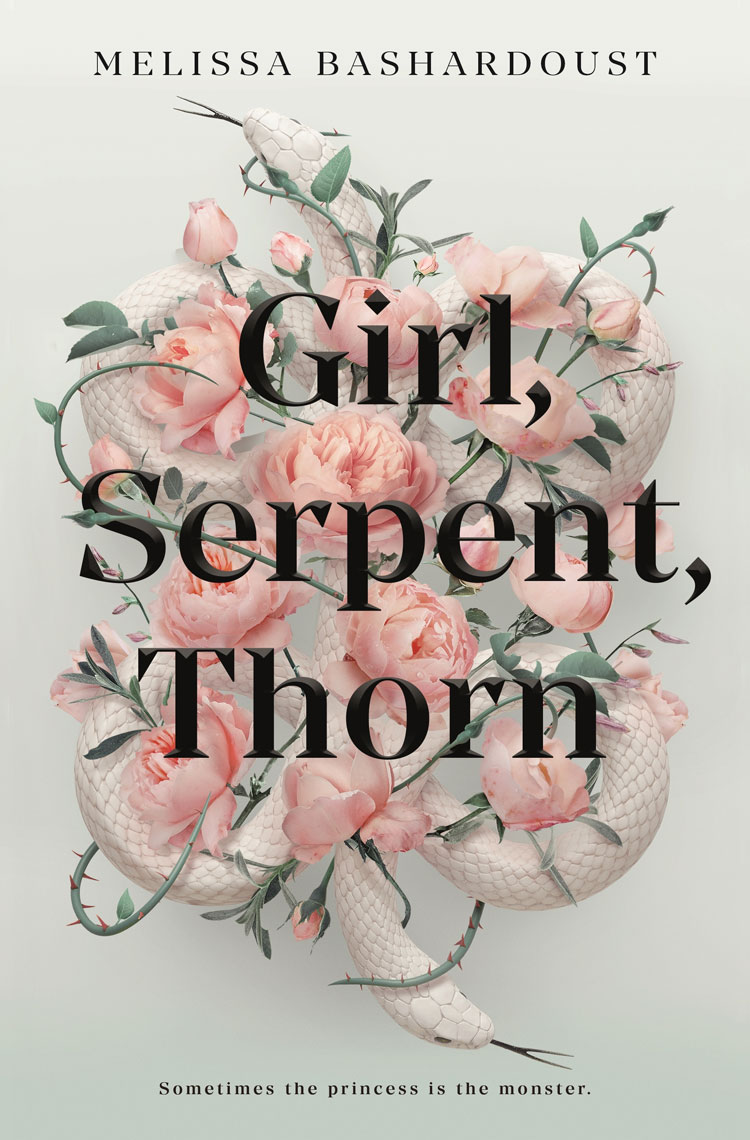 Once upon a time, in a land full of evil ‘divs’ whose sole purpose is to bring chaos and destruction, a girl stumbled upon a helpless woman in a trap and set her free. However, the trapped woman was the prisoner of a fearsome div and he was angry. He put a curse on the young girl so that years later, when she has a daughter, that daughter would be poisonous and anything she touches will die.

That young girl was Soraya’s mother.

Now, Princess Soraya leads a lonely life spent hidden in the palace and its gardens (flora is the only things she can touch). However, her desolate existence is changed forever when she finds out the mysterious soldier Azad has miraculously imprisoned a div named Parvaneh.

This is the first div anyone has come into close contact with and Soraya has questions. Does Parvaneh know how to break her curse? Who is the handsome Azad? And, more importantly, will Soraya raise up to be the brave princess she has the potential to be?

Girl, Serpent, Thorn is written like a fairy tale full of myths and monsters, which perfectly reflects the world of Atashar itself, where people live and die by ancient stories and superstition. However, those ancient stories are methodically dispelled throughout the book, expanding the novel’s seemingly simple bedtime fable concept.

Like one of Soraya’s precious roses, the story of Girl, Serpent, Thorn slowly opens up before our eyes, revealing more and more inner layers as each mythical trope is picked away like a petal and thrown away.

All fairy tales need a hero, but Girl, Serpent, Thorn’s is a little complex. As the saying goes ‘mighty oaks from little acorns grow’ and the initially shy character of Soraya soon sprouts idiosyncrasies that keep readers interested – she’s afraid of what her poisonous touch might do but she’s also curious to see the results… She’s at once fiercely loyal to her family and bitterly envious of their lives. Fairy tales also need a love story, and this one has two – leading to a love triangle where the outcome will keep you guessing throughout.

Further to this, like any good folk tale, the novel itself holds an essence of romanticism. Author Melissa Bashardoust has created a beguiling, beautiful world that will whisk you away into a life of ancient laws, magical powers and righteous battles.

Girl, Serpent, Thorn takes your expectations of a fairy tale and turns them on their head, creating an elaborate, unconventional and fascinating story, complete with heroes who are morally questionable and villains who you’ll fall in love with. Will they live happily ever after? We’ll let you find out for yourselves – but it probably won’t work out the way you expect…