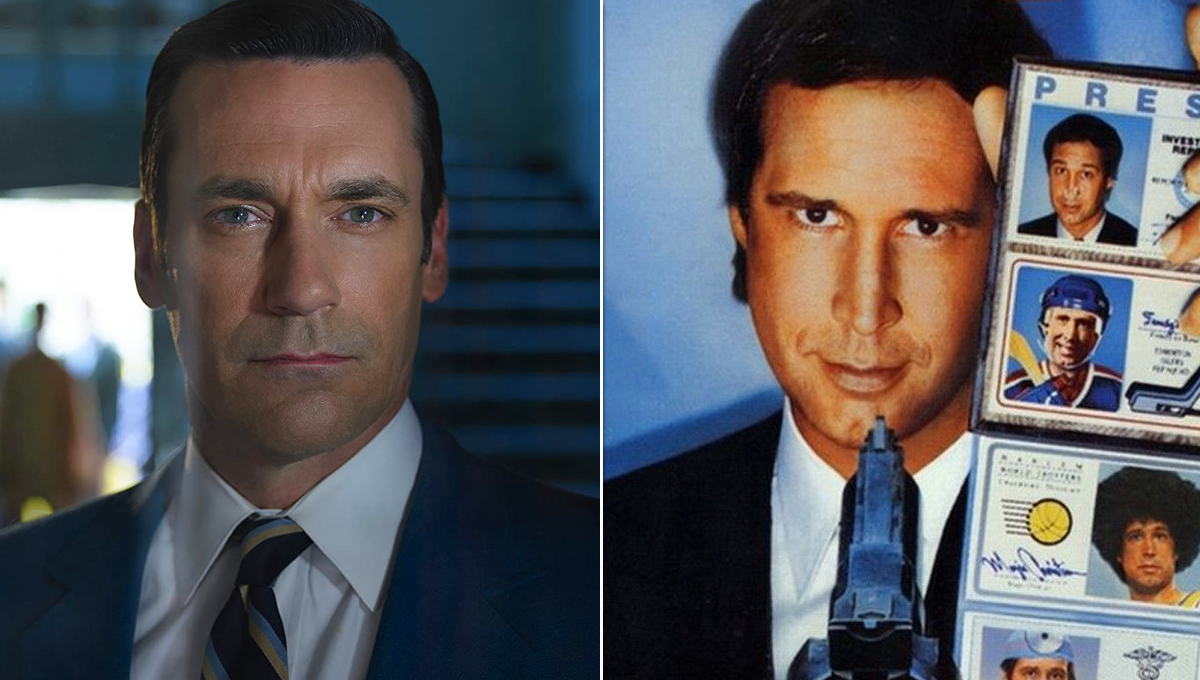 Jon Hamm is set to make a new advertising pitch, one that will see him taking on the deadpan, stumble-bumming 1980s-era comedy mantle of Chevy Chase with a reboot of Fletch.

Miramax has announced its development of a new Fletch movie, which will see star Hamm co-produce with the studio. The film will be a reboot of the franchise launched by 1985 hit detective comedy Fletch and continued with 1989’s Fletch Lives, which starred Chevy Chase as Irwin “Fletch” Fletcher, an eccentric-but-tenacious L.A. Times reporter who gets scoops the dangerous way while donning an absurd variety of disguises. Like the 1985 hit, the reboot will be a loosely-comedic adaptation of author Gregory McDonald’s 1974-launched series of Fletch detective novels.

As Miramax CEO Bill Block expresses in a statement:

“Fletch’s duration over audiences — whether told on paper or the big screen — entertains all and we could not be more thrilled to see what twenty-first century twist these artists create.”

Reboot status aside, Miramax’s Fletch won’t carry a copycat story of the 1985 classic, which centered on Fletch’s investigation of a complex murder-for-hire scheme and a perilous romance. Rather, the new film will adapt the second book in McDonald’s Fletch novels, 1976’s Confess, Fletch, in which Fletch finds himself the prime suspect of multiple murders, endeavoring to clear his name and—in some monumental multitasking—find his fiancée’s stolen art collection inherited from her presumed-dead father. Of course, the Hamm-headlined Fletch film will look to retain the humorous flair of the Chase-starring films, although likely without the synth-strewn Harold Faltermeyer score.

Greg Mottola has been tapped to direct this new Fletch, bringing notable experience from the raucous 2007 hit, Superbad, along with 2009’s Adventureland, 2011’s Paul, and television stints on HBO’s The Newsroom, Amazon’s The Dangerous Book for Boys, FXX’s Dave, Fox-era episodes of Arrested Development and classic 2001-2002 Fox comedy Undeclared. Interestingly, Fletch will facilitate a reunion between Mottola and star Jon Hamm, who he previously directed in 2016 spy comedy Keeping Up with the Joneses. Mottola will work here off a script by Zev Borrow (Chuck, Forever).

“Producing this film with Jon has been a long-time dream of mine and with Zev and Greg on board to write and direct, I really believe that this will be an exciting and modern reimagining of this beloved character.”

For Hamm, Fletch might just provide a big screen platform to elevate him to the tier of superstardom. Indeed, while his legendary television run as the charismatic Don Draper on AMC’s 2007-2015 drama, Mad Men, has secured him an iconic place for posterity, the success of his film career has been more sporadic. He more recently fielded supporting roles in 2019 films Richard Jewell and Lucy in the Sky and 2017’s Baby Driver, along with a starring role in 2014 Disney feel-good baseball drama Million Dollar Arm and recurring TV runs on Netflix’s Unbreakable Kimmy Schmidt and Amazon’s Good Omens. However, Hamm will be quite visible on the big screen from his role in the COVID-delayed sequel to another popular 1980s property, Top Gun: Maverick, which is currently scheduled for December 23.

It will be interesting to see if there’s an untapped interest for Fletch in the 2020s. While the Chevy Chase film—the first one, specifically—is widely recognized as a comedy classic, it wasn’t exactly a monstrous box office hit, only grossing $50 million domestic and $9 million international, relegated to the #2 spot in its May 31-June 2, 1985 opening weekend to the second-week run of Rambo: First Blood Part II. While Fletch Lives did top its March 17-19, 1989 debut, it was stale and ultimately grossed less than the original. However, as is the case with all reboots, there’s always the mysterious variable of nostalgia, which may not pay off consistently, but is a formidable force nevertheless.