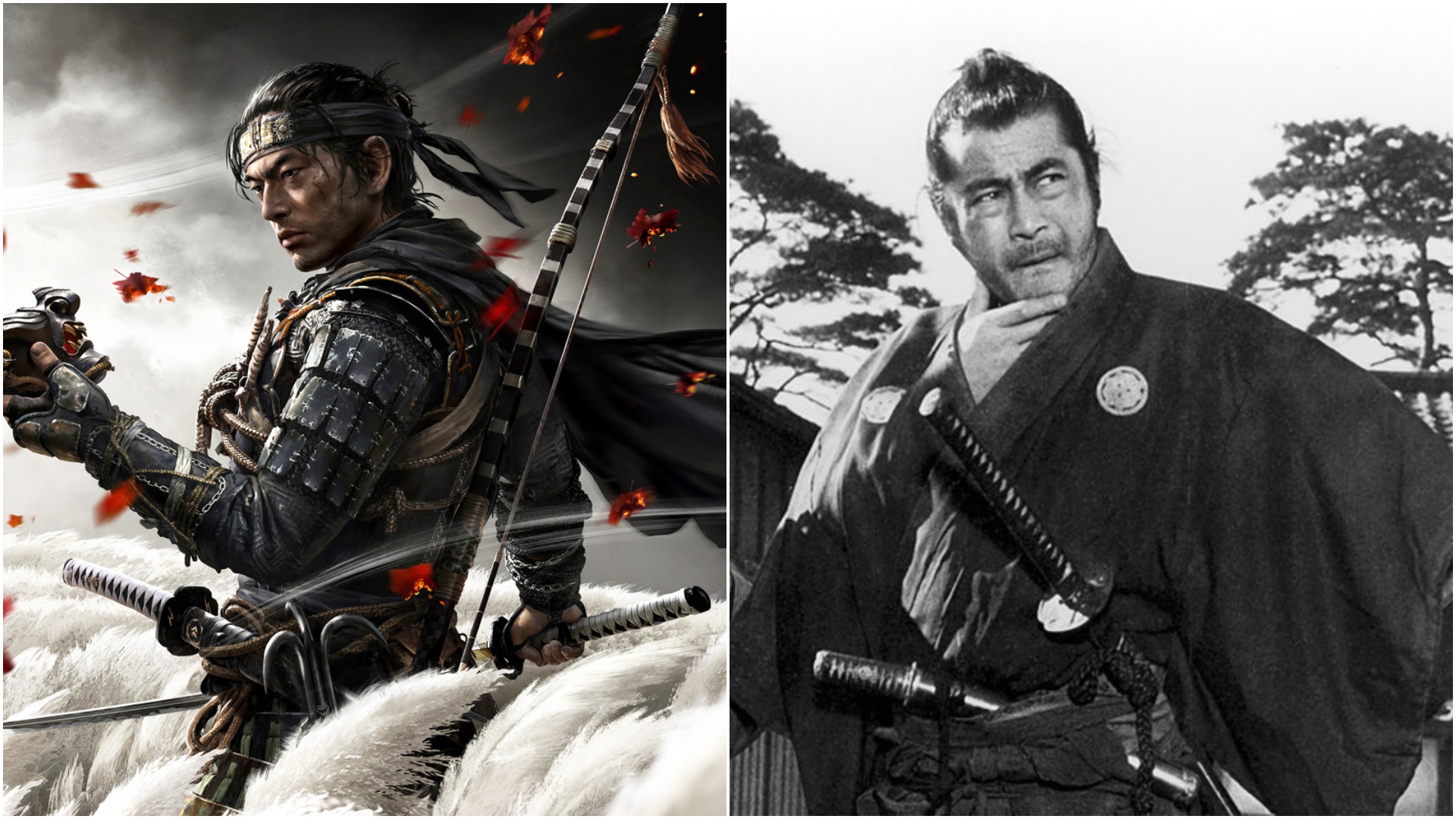 Ghost of Tsushima‘s developers at Sucker Punch have been very explicit about the ways the samurai films of legendary Japanese director Akira Kurosawa have influenced their game. The PS4 exclusive even features a “Kurosawa Mode” that allows you to apply a stylish black-and-white filter to the experience, recreating the somber mood and film grain of the director’s work.

Anyone who tells a modern samurai story owes some kind of debt to Kurosawa. He may not have been the first director to tell a samurai story via film and his legacy as one of the greatest directors of all-time may have been secured even if he hadn’t directed a frame of a samurai adventure. What a shame it would have been to live in that world, though.

Kurosawa’s samurai films aren’t just some of the best samurai adventures told in any medium, they’re on the shortlist of the best movies ever made. So whether you want to hype yourself up for Ghost of Tsushima or you just want to experience some of the finest pieces of filmmaking ever made, these are the Kurosawa samurai movies you need to watch.

The rape of a woman and the murder of her husband triggers an investigation based on the recollections of four people who possess conflicting memories of the events which led to the horrific crimes. What follows is the search for truth in a world where even the liars may not be aware of their bias.

Then again, Rashomon offered such a fresh take on storytelling and perspective that nearly every piece of fiction which followed its release has been influenced by it in some way. Rashomon not only pioneered a new type of narrative device called the Rashomon effect — conflicting accounts of an event by several eyewitnesses — but it taught viewers to consider the potential influence of the unreliable narrator on their perception of a story.

This 1954 film tells the story of a group of villagers who recruit seven rōnin to protect their homes from bandits. The samurai not only contend with the bandits but the discourse within their own ranks as well as the villagers who begin to wonder whether they’ve made a mistake by hiring mercenaries.

Even if you’ve never seen Seven Samurai, we’re willing to bet that you’re familiar with it. Not only is it regularly referred to as a major cinematic achievement, but countless movies have borrowed filmmaking and storytelling elements from this masterpiece. Other beloved movies, most notably The Magnificent Seven, are even just straight-up remakes of Seven Samurai. Even The Mandalorian paid homage to Seven Samurai in its first season.

Considering that Seven Samurai has impacted the works of many great directors who have emerged since its release, it’s hardly a surprise to hear that Ghost of Tsushima‘s directors consider Seven Samurai to be one of the most important influences on their game. When you picture samurai, there’s a good chance you’re picturing this film.

In Throne of Blood, two samurai return from battle only to be met by a spirit who predicts their future. When the spirits predictions come true, the wife of one of the samurai encourages him to murder their lord and take his place as ruler of their land.

In other words, Throne of Blood is a samurai-themed remake of William Shakespeare’s Macbeth. There are many who even consider it to be the finest film adaptation of Macbeth despite the fact that Throne of Blood doesn’t share that play’s name.

Excellent plot aside, Throne of Blood is arguably most famous for its incredible visuals. The thick fog that weighs heavy on the movie’s setting not only perfectly captures the protagonists’ dangerous desire to see the road ahead but it helps set the stage for climactic battles and scenes which border on horror.

This 1958 film follows two peasants who agree to escort a man and woman through dangerous territory. What they don’t know is that the man and woman are actually a general and his princess and they’re being hunted by dangerous enemy forces.

Perhaps best known as the inspiration for Star Wars, The Hidden Fortress is one of those films you may feel like you’ve seen without having actually sat down to watch it. A few familiarities aside, Hidden Fortress stands alone among Kurosawa’s other samurai (or samurai influenced) films due to its incredible sense of adventure.

The Hidden Fortress is an excellent adventure that perhaps focuses a bit less on character development than some of Kurosawa’s other films but more than makes up for it with a story that reminds us why we love movies in the first place.

A samurai wanders into a town where two competing crime lords vie for his services. No, that’s not the start of an old joke. It’s the basic premise behind one of the greatest samurai films ever made. You may also know it as the premise of classic Spaghetti Western flick, A Fistful of Dollars.

While the Clint Eastwood-led Yojimbo adaptation successfully translates many of this story’s elements to the Wild West, there are certain qualities in Yojimbo which are unique to samurai mythology and culture. This tightly told adventure focuses on the perception of power that surrounds the wandering warrior as well as the greed that plagues men regardless of their station.

Ghost of Tsushima’s open-world setting will be filled with side missions to complete. Some of these missions will undoubtedly pit you as a samurai for hire in situations not unlike those found in Yojimbo.

Originally conceived as an adaptation of the Shūgorō Yamamoto novel, Hibi Heian, Sanjuro was re-written to incorporate Yojimbo’s protagonist following the success of that film.

Sanjuro follows the adventures of the rōnin from Yojimbo as he tries to help a group of young samurai who suspect that their lord chamberlain is corrupt. What follows is a complex and fascinating tale that sees the young samurai and the rōnin battle their enemies while struggling to come to terms with their roles within their world and society at large.

Ghost of Tsushima’s directors cited Sanjuro as one of their biggest influences, and it’s not hard to see why. Not only does Sanjuro find Kurosawa at his most reflective in terms of the morally ambiguous mystique of the samurai, but it may be his most stylish samurai film. The film’s final battle and climatic duel are often cited as two of the most influential pieces of samurai action ever committed to film.

A thief is recruited to serve as the double of an elderly warlord in order to help confuse potential assassins and other rivals. When the warlord dies, his top generals agree to have the thief stay on as ruler. Soon, an attack from a rival clan forces the thief to become a true leader and warrior.

While Ghost of Tsushima’s appropriately named Kurosawa mode focuses on the director’s legendary black and white visuals, Kagemusha proves that the director’s legendary eye for cinematic style and the romanticism of the feudalism era isn’t limited to a monochrome point of view. In fact, a memorable nightmare sequence in this film reveals that he had a surrealist side that required a full spectrum of color to fully showcase.

Kagemusha also features some of the most impressive large-scale battles ever seen in a Kurosawa samurai film. It’s one of those films that shows the director’s truly special ability to combine the intimate and the epic even as he sets a feast for the eyes.

A dying warlord decides to relinquish power and divide his extensive kingdom among his three sons. But when the sons begin to fight over their lands, it becomes clear to the warlord that he may be witnessing the dying days of his empire and family. Like Throne of Blood, Ran is essentially a remake of a William Shakespeare story. This time, it’s King Lear.

Released in 1985, Ran is often described as Kurosawa’s last epic. Like his previous samurai movies, much of the joy of watching Ran comes from watching Kurosawa in complete control of his craft, even as the scope of the tale grows and grows.

So far as Ghost of Tsushima goes, it’s certainly interesting to hear that its directors will be using wind as both an environmental building block and a narrative device designed to organically point you in the right direction. While wind is present in many Kurosawa films, its essentially a featured player in Ran where bursts of wind emphasize the chaos of a rapidly changing world.

Ghost of Tsushima is out on July 17 for the PlayStation 4.