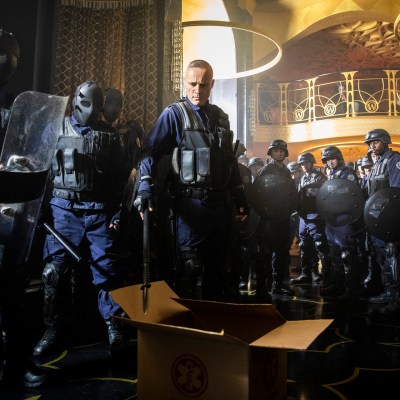 A history lesson learned, over and over, is that conquering a territory is much easier than governing it. Even if the revolution is just, once the bloodshed stops and the compromises begin, not every general is a George Washington-level statesman. The bodies have barely been frozen and the blood still stains the floors and yet, there’s already another threat demanding Layton’s attention. It’s not looting or worries in First Class, it’s something much harder to put a stop to. There’s another train, and it’s coming to link up to Snowpiercer.

Snowpiercer has been through a lot of world-changing events over the past few episodes. Wilford is dead, First Class is plotting against Melanie (Jennifer Connelly), Third and Tail are plotting against First Class, there’s armed revolt in the train courtesy of Layton (Daveed Diggs), the food supply is strained to the point of breaking, the train is low on excess electricity, and as Bennett (Iddo Goldberg) reminded Miles (Jaylin Fletcher) in the previous episode, they’re one missing hex nut away from complete extinction. The task of holding the train together under Layton’s leadership was always going to be considerably difficult, even before the second train comes roaring along to connect with them. At least, with an external threat, internal issues are pushed to the side for a few moments; Layton’s democracy is all well and good, should it survive whoever is on Alice, the prototype engine steaming hard to catch up to them.

That’s the problem with class warfare. Even when it’s over, those class divisions fail to fall away. All that happens is people look to get reprisals from other people, be it Tail taking over Third Class rooming quarters to someone like Pike (Steven Ogg) taking over the Folgers’ vacant First Class cabin to throw a huge party with booze and sex and all sorts of visitors smashing things and taking things. People he doesn’t even know, people who might even be First Class, are looking to get back at the hated Folger family for throwing everything into upheaval by protecting their psychopath daughter. When you’ve been living like a mushroom in the Tail, getting your hands on some fresh produce is too much to risk, even if grabbing that cart full of lettuce puts everyone at risk.

It’s difficult for someone to see past their own needs to see the good of the train at large, particularly when being the boss is a thankless job. Layton, who is rushing around dealing with disciplinary issues and trying to quell the concerns of first class, discovers that almost immediately in “994 Cars Long,” because he can’t get one fire put out before another one starts. The food supply is damaged. The train is damaged. There’s looting and violent all over the train. Ruth (Alison Wright), the new head of Hospitality, isn’t much help in getting things under control since she wants a restoration of order versus the growing pains of a forming democracy.

Ruth, the last of the plotters working against Layton and Melanie, receives a lot of focus as multiple characters attempt to bring her back into the fold by feeding her bruised ego. She’s been lied to by someone she thought was her best friend, the Wilford she gave her life over to is dead, the Nolan Grey she was romantically interested in is dead, and while she’s getting a promotion to head of Hospitality, she’s not getting that spot on the leadership counsel she was expecting under the Folger regime. It’s a lot of adjustments for one person to make, and it’s no wonder she drifts around in Graeme Manson’s script, lashing out at Layton, First Class passengers, Roche, Tailies, Melanie, and everyone she comes across. They’re talking about building a new order, and she’s completely disordered, struggling to keep her head above water mentally while grieving for a friend she thought she had and a lover she didn’t get to keep.

Daveed Diggs’s Layon, similarly, is as shaken up as anyone, if only because now he’s making all the decisions for the train. Everyone needs his attention, and he finally finds out about his future child on the way. He’s got to reassure First that the poors aren’t coming for their blood and keep Third and Tail under control without the aid of anyone other than the brakemen; all of the heavy body armor and good weapons were sent off onto a siding with the Folgers to freeze to death and most of the folks he’s trying to get under control are now blooded combat veterans that he knows personally.

Good news and bad news abound for Layton, and Diggs gets to show off his emotional range throughout the episode. While Diggs has been the break-out star of this show, Jennifer Connelly continues to impress, week after week, this time with a brilliantly conducted therapy session with Audrey in the Night Car. If there’s someone happier than Melanie not to be in charge, I’d be surprised; she no longer has to be the face of Wilford Industries, she can now focus on what her most important work has been all along, keeping Snowpiercer running and looking out for the greater good.

While “994 Cars Long” lacks the ticking clock from its penultimate episode, James Hawes continues to show nice touch creating tension, this time via the efforts of Bennett to conceal the fact that another train is on the way to meet them from Melanie and Layton. Iddo Goldberg does this wonderfully, subtly, always tinkering in the background on something related to the satellite signal while trying to redirect Melanie and everyone else into a different theory than an approaching supply train. He fails, because at some point the other train becomes visible, and that leads to a falling-out between him and Melanie that will undoubtedly have repercussions even after the second train docks and Wilford, or whoever, comes to claim Snowpiercer. Everyone is hungry and exhausted, but all they can think of is either rushing down to greet Wilford with a choir of singing children (if you’re Ruth) or rushing down there to protect what’s yours (if you’re everyone else).

That the fighters aren’t used isn’t a huge surprise, but what is surprising is the failure to stop Wilford’s hostile takeover of Snowpiercer by Melanie. She’s knocked from the top of the train, the brakes slam on, and Layton, who not that long ago got an ultimatum giving him an hour to decide on whether or not he’s going to give up his war, now has about 13 minutes to decide if he wants to play ball with Wilford or let everyone freeze to death. Layton doesn’t have a choice to make, but he does have the ability to think up schemes on the fly, and it seems as though he’ll have a lot of help working beside him to prevent their new democracy from becoming a Wilford-powered dictatorship.

If everyone doesn’t starve or freeze or kill each other first.