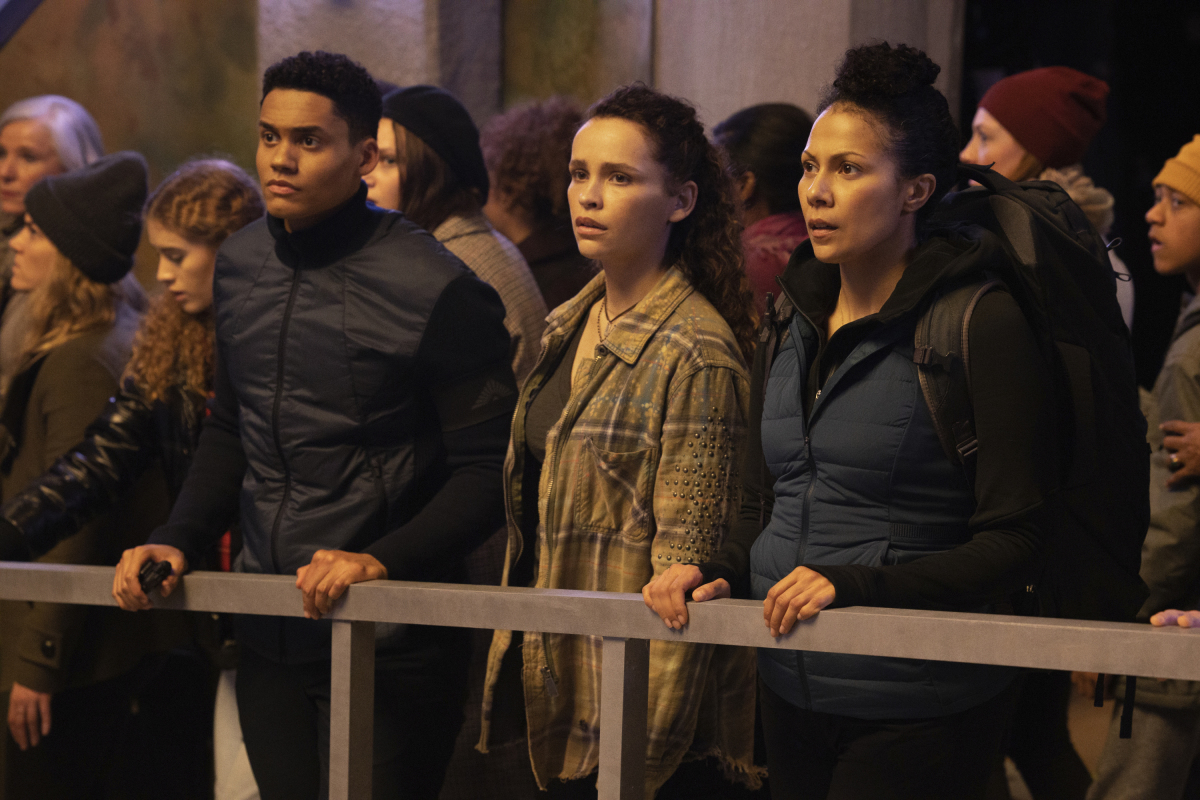 This THE 100 review contains spoilers

Anaconda is almost entirely a backdoor pilot for a prequel spinoff set during and shorty after the first end of the world, over on dear old planet Earth. It rewrites the Grounder origin story and answers some questions you probably never had about the Second Dawn from way back in season 3, but mostly it’s great to see Becca in action again, to catch some early show Easter eggs, and to meet a couple of compelling new characters who are actually trying to do the right thing, however hard that might be on a post-apocalyptic Earth. Sound familiar? Let’s dive in.

Cadogan’s story only occasionally explains how and why he is on Bardo, though of course the setup for these things is so rarely why they’re actually happening. Perhaps the biggest flaw is Cadogan himself. That this story is meant to be from his perspective strains at believability, considering how much of it was clearly a secret from him or even took place after he left planet Earth. But more importantly, I’m none too eager to spend time with him in flashback (or possibly in the present tense?) in the possible spin-off.

Once again, this season continues the theme of revisiting a story we thought we knew to reveal a new truth. Only, I’m not so sure all of it works. Much of Grounder culture is wiped away and retconned as coming from basically one person, Callie (Lola Evans). While she is a good person and a worthwhile character to follow, it changes the calculus of how The 100 treats Grounders to retroactively take their agency and cultural property away from them, instead ascribing much of it to a simple handoff. Perhaps just the language would have worked, but also having “Tree Crew” be an inherited name makes it feel like something has been taken from them. It’s hard not to picture the face Indra would make if she saw some punk rolling up his sleeve to show off a tattoo sand saying, “OG Tree Crew!”

It’s always good to see Erica Cerra again, especially as Becca. She makes an excellent foil for Cadogan, but as much as I loved her role here, it’s such a pity knowing that her ability to be in the prequel is limited to flashbacks. Callie and Becca had a great rapport, so it’s too bad that we’re losing that relationship in addition to Callie’s relationship with her best friend that opened the story – and seemed like it might be more than just friendship. If Callie is going to have women to hang out with during this prequel other than her mom, they’ll need to be established after the show is greenlit, because she’s surrounded by men. Her love interest, her brother and the other henchmen Tristan, her fascist father. It’s not enough to make a show starring an interesting young woman of color and call it a day – she needs to have others to interact with.

Callie’s mother Gemma (Crystal Balint) flies a bit under the radar, but she has the greatest potential. She makes three surprising, about-face decisions over the course of the story – to go to the bunker, to stay with Bill Cadogan, and to help her daughter escape – but each time it felt earned. That’s the kind of character I want to spend more time with, someone who can have a completely genuine reason for making each of those seemingly contradictory choices in the space of just one episode. I’m glad we saw her putting on a suit and not simply irradiated to death.

As villains go, Cadogan sits somewhere between Russell Prime and Dante Wallace, the spinal fluid-hungry son of the president of Mount Weather, which makes it hard not to feel like we’ve been here before. He fancies himself a genteel savior, but he’s clearly all underbelly. He doesn’t want his people to be safe; he wants to be their savior. The use of “Level 12s,” aside from being fun cult lingo a la Scientology, seemed to signify that to Cadogan, it’s not about saving his people, who became his through shared experience, but about saving some arbitrary definition of “the best” people, which likely translates to the usual unfair interpretation of elites.

It’s hard to say which is less interesting right now, Cadogan or the Disciples. But on a season where screen time feels precious and so much else pops, it’s hard to justify spending much more time with a snoozer of a replay villain like Cadogan and perennial CW re-hire Anders (Neal McDonough). If the prequel happens, we need more of the Beccas, Callies, and Gemmas, whether they’re heroes or villains, not reduxes of the same old thing.

As for the present tense, the decision to nix the cold open and instead allow the characters, especially Clarke and Raven, to mourn (what they think) is Bellamy’s death was a good one. Eliza Taylor and Lindsey Morgan do an excellent job here in overcome closeups that allow their grief to breathe before moving on to the business of the episode. Miller’s stuttered orders are a perfect character moment: holding the room is his way of affording Clarke and Raven that moment. He will mark his own later, privately.

One of my pet peeves is when shows don’t even pretend that a “dead” character is dead by allowing the others time to mourn them. The writers know it isn’t real so they don’t “waste” their time. It always takes me out, but it also feels like a missed opportunity to mark relationships and potentially move them forward. On The 100, a show that’s so run and gun, it’s a big deal to slow down and take a moment, but Bellamy warrants it. Now, even if he (inevitably) comes back, it will land differently, and we might even see characters respond differently than we expected, especially those who have had three months believing he’s dead, compared to those who just lost him.

Speaking of, on the other end of the episode there was a great reveal of Echo, Octavia and Diyoza as Bardo’s newest EDM warrior DJs. I’m sure three women as capable as them (a literal spy, a former navy hero/terrorist and a former commander) are playing along so they could train, learn about the Disciples, and do right by their people. Judging by the absence of Hope, she could be elsewhere doing another job, or perhaps being used as leverage against them. It’s easy to imagine Diyoza and Auntie O saying they would only fight if Hope was on the sidelines.

What I’m looking for moving forward, though, is the cracks in the façade for these three women. None of them are the hardened titles they once were. They had all grown beyond that in a positive way, but losing Bellamy could certainly turn Octavia or (more likely) Echo into someone a bit more hopeless, dark, and embittered. Octavia at one point seemed driven mad by what the Disciples had done to her. Diyoza has never been more vulnerable than she is now that she has a daughter that someone else controls. How have their mental states held up? What is Clarke really walking into? Is it the judgement day Becca saw?

Finally, I want to send some love out to the fandom of The 100 as a whole, but especially to all survivors of domestic and sexual violence. As you may or may not know, actor Bob Morley was accused of abuse this past week. It was implied that Eliza Taylor played an active role as well. Take care of yourselves, whether that means stepping away from the show for a while, seeking comfort in the knowledge that Bellamy and Clarke are not the actors who portray them, or something else entirely.