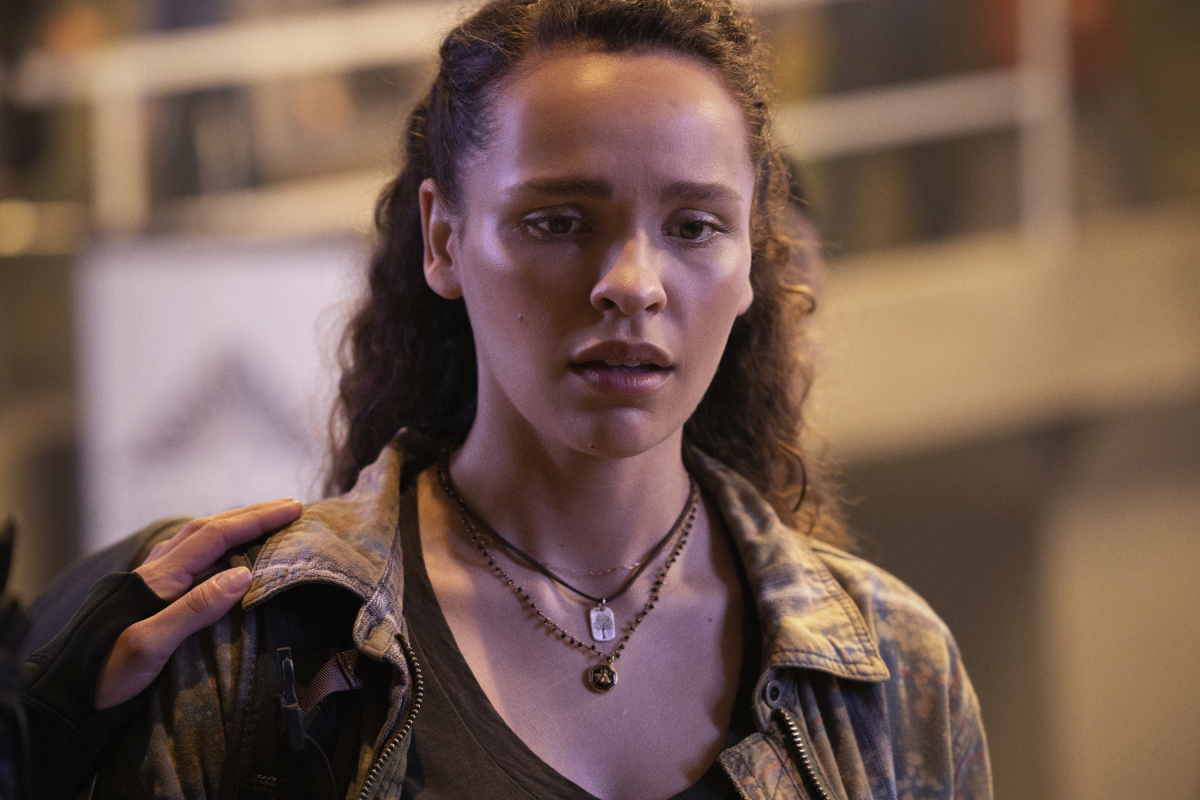 The following contains spoilers for The 100 backdoor pilot episode “Anaconda”.

As backdoor pilots go, The 100 episode “Anaconda” is darn effective. The hour serves as an origin story for the human survivors of Earth’s first nuclear apocalypse, taking us all the way back to the pivotal moment in 2052 when the missiles were launched and a cult-ish group known as the Second Dawn locked themselves underground for protection.

“Anaconda’s” story is compelling in and of itself, following Second Dawn leader Bill Cadogan and his semi-estranged family as they attempt to survive the end of the world and determine what direction the future of the human race will take in the aftermath. The story eventually splits our survivors into two groups – one who will form the ancestors of the Grounder clans we already know, and a second, who will colonize other planets far from Earth.

The episode also fills in the gaps at the end of Becca Pramheda’s story, burning her at the stake before sending the future Grounders off with the AI known as the Flame and a legend that will one day turn into the Commanders. The second group of survivors leaves through the portal, to an eventual future as the Shepherd’s Disciples on Bardo, which will take them outward from there to Sanctum, Skyring, and Nakara.

The planned The 100 prequel would explore the story of what happened after the future Disciples and future Grounders part ways, with one faction led by Cadogan himself and the other by his daughter, Calliope. Unlike its predecessor, however, it would also employ a narrative flashback structure to introduce viewers to what the world was like on pre-apocalypse Earth.

“I’m also fascinated by the world that led up to the apocalypse, which sadly feels a lot more like our world every day,” showrunner Jason Rothenberg told Den of Geek.

Given the brief glimpse we see into the world of 2052 on the Cadogans’ television screen, with its overpopulation, large-scale climate protests, and police brutality – not to mention the imminent global thermonuclear destruction – there certainly seems as though there will be plenty of timely and uncomfortably familiar story there.

“Getting to kind of go back and show that, to me, was part of the fun of this, and certainly will be part of the—fun might be the wrong word—but part of the drama of this show will be flashing back consistently to the pre-apocalypse to show all of our characters who they were before this, our global catastrophe struck,” Rothenberg said. “So, much like Lost used flashbacks, I think we’ll do that as a device in this series.”

The 100 has always been a series that shines brightest when exploring stories of characters under extreme duress, using nightmarish circumstances to show us what humanity is capable of – for both good and ill – when pushed to its limits. “Anaconda” is no exception, and the proposed prequel series will certainly be much the same, as the two ragtag groups who depart the Second Dawn bunker build new societies in two very different situations. As one group heads into a literal nuclear wasteland, the other journeys to the stars, But both will surely be asked to make difficult, if not impossible, choices almost immediately.

This is, in fairness, the sort of narrative environment in which flashbacks could be an extremely useful tool. Though we’re familiar with the general scope of the prequel series’ universe, we don’t know any of these characters. At the moment, most of them don’t even appear to be connected to anyone from the current world of The 100. The idea of letting us see them as the people they once were in the real world is appealing and will provide necessary layers to their post-apocalyptic experience. After all, it lands differently when someone chooses to kill if they were a pacifist all their life before that moment, doesn’t it?

But using flashbacks as a narrative device can also be something of a double-edged sword.

Sci-fi series Lost is rightly credited with pushing this storytelling trick into the mainstream television toolbox, but it’s been a fairly regular feature on many shows in the decade-plus since we were all stuck on an island together. From Orange is the New Black to This is Us, regular flashbacks have become a standard tool for exploring what makes specific characters tick, as well as to illustrate how they’ve been molded by their life experiences in ways both good and bad. (They’re also super useful for pulling off shocking plot twists and/or playing with the passage of time in a given series – looking at you, Westworld.)

Since The 100 is a CW property, the superhero drama Arrow is perhaps our most instructive comparison. It uses the flashback – and in later seasons, flashforward – structure to frame its episodes for the entirety of its run and is a great example of what’s both wonderful and awful about the format. For its first two seasons, the flashbacks of Oliver Queen’s time on Lian Yu served a necessary narrative purpose. Season 1’s were instructive, filling in necessary gaps for us about how a once shallow playboy transformed himself into a combat-ready vigilante. The second season flashbacks were more fully integrated into the overall plot, showing us how Oliver’s history with Slade Wilson had a direct impact on his present-day struggle with Deathstroke.

After that, however, the flashbacks became almost pointless, something the show included simply because it was a framework the series had established as something it had to have, rather than a tool it used constructively. In them, Oliver went to Hong Kong, and then back to Lian Yu again, and then to Russia, without ever informing his family he was actually alive. We could have really all done without all of them. (And let’s be honest, that show had plenty of women who could have used the screentime.) Did the show just get tired of coming up with reasons for the flashbacks to exist? Maybe. The audience certainly got tired of watching them, which likely drove the show’s decision to flip to flashforwards during the show’s final seasons.

Maybe flashbacks, as a narrative device, have a definite shelf-life. Even infamous ones on Lost itself eventually felt more confusing than thrilling.

The multiple tightly plotted elements of “Anaconda” – particularly surrounding Becca’s arrival and death – point toward a narrative that has been thought out to a fairly granular degree. This is an encouraging sign that perhaps Rothenberg already knows what stories he wants these flashbacks to tell, and the ways in which they need to connect to the prequel series’ larger arcs. But how long they’ll be a viable tool for the show, once we know these characters better and have a firmer grip on how their stories slot into the history The 100 has already shown us is something the prequel series will have to figure out on its own.