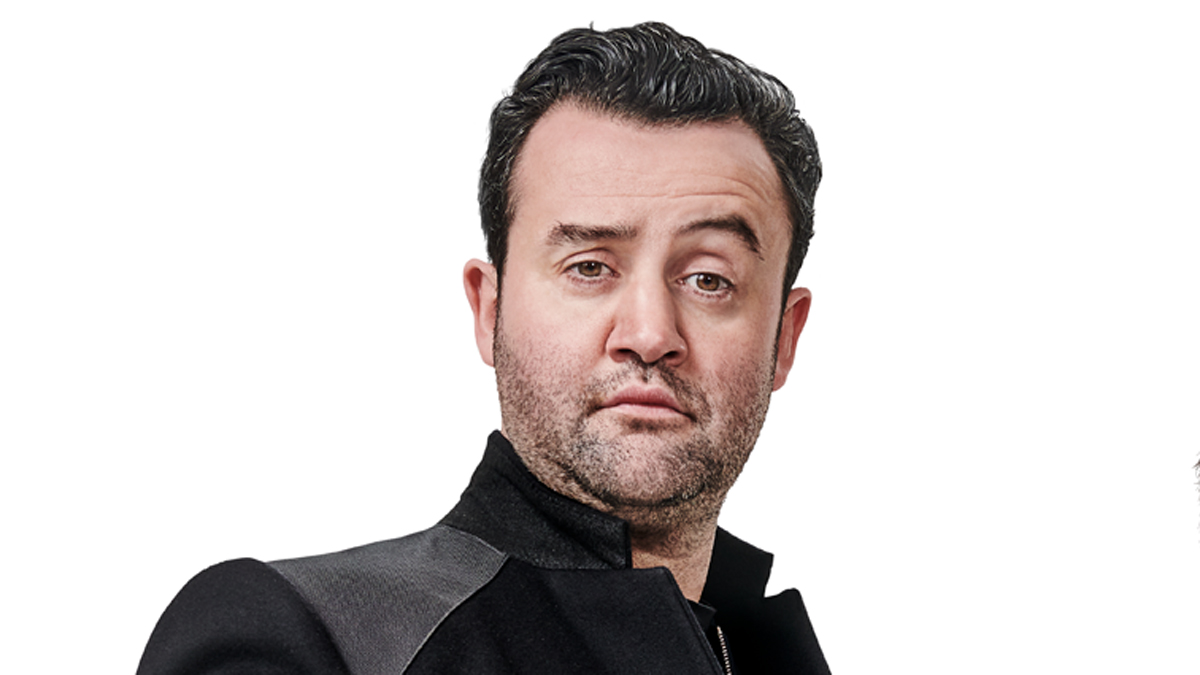 ‘He pops up absolutely everywhere doesn’t he?’ says Daniel Mays about his Code 404 co-star Stephen Graham. You could say the same of Mays. A draw on any cast list, between them in the last year alone they’ve appeared in almost 20 major titles – 1917, Good Omens, White Lines (Mays), The Irishman, The Virtues, Line of Duty, Save Me (Graham) to name just a handful.

Why Mays and Graham are in such high and regular demand is no mystery; they’re two of our best. Mays has an instant affability on screen that he’s able to turn to tragedy or comedy or both at once. Graham’s characters are often the reverse, unknowable and dangerous before he lays their vulnerabilities bare.

In sci-fi comedy Code 404, they play detectives with a tangled personal history. Mays is a DI unexpectedly brought back from the dead via some bug-ridden experimental AI tech. Graham is the trusty partner who’s been keeping his colleague’s wife (Anna Maxwell Martin) company during his absence.

Already renewed for a second run, Mays tells Den of Geek it’s the most binge-watched show on Sky in eight years. “We’re all buzzing about doing another series.” As the first is released on DVD, he talks us through his TV memories…

Which TV show inspired you to start your acting career?

Robbie Coltrane in the Jimmy McGovern drama Cracker. I find his stuff heart-breaking at times but it’s astounding social realist television. Any script written by Jimmy is nuanced and powerful. He’s one of this country’s most amazing writers.

More than anything though, it was Robbie Coltrane’s performance. I remember all the incredible performances, Robert Carlyle as the skinhead with those fantastic interrogation scenes, Christopher Eccleston… but Coltrane as this antihero, a gambler and a womaniser and a drinker, a maverick copper, he was amazing.

That and Prime Suspect.I could go further back, but in terms of when I was really getting serious about becoming an actor, those were the two that were compulsive viewing. I’ve subsequently gone on to work with Jimmy McGovern so it feels like it’s gone full circle.

Which TV character did you want to be when you were younger?

As a kid I was really into The A Team and whassisname, David Hasselhoff! Michael Knight from Knight Rider. As a kid I was obsessed with that show. I had all the action figures. That car was so cool wasn’t it? And when he did the turbo boost and jumped over everything!

In The A Team I probably wanted to be Face, but in reality, if I was to be cast as anyone now it wouldn’t be Face [laughs], it would be Murdoch wouldn’t it?

And which TV character would you like to be now?

When I was working, I didn’t really watch much telly at all but obviously that’s all changed now we’re in lockdown. Before, I hadn’t ever delved into The Sopranos, and I love that character, Tony Soprano. If I could pick one TV character I’d like to have a go at now, that’s the one.

Has any TV programme ever given you nightmares?

Oh man, I’m telling you! There was an ITV adaptation of Jekyll & Hyde with Michael Caine. I’m going back years and years, I must have been about 10 or 11. The make-up that they used in this show when he changed from Dr Jekyll to Mr Hyde, the Hyde make-up was absolutely terrifying, to the point where it really affected me.

I was far too young to watch it and I even had to sleep in between my mum and dad at 10 years old, I was absolutely petrified of that character. Even in preparation for these questions, I went on YouTube and typed it in and there he was again, petrifying, even today!

When did you last laugh out loud watching TV?

The new Alan Partridge when he’s doing the talk show with Susannah Fielding, that particular sketch when he was attempting to use the toilet on the train without using his hands, when he went into that whole routine of opening the door with his knee. Anything with Alan Partridge I find absolutely hysterical.

I’m an absolute sucker for Only Fools and Horses as well. I’m such a die-hard fan of that show and whenever that pops up on UK TV or Gold, if I end up watching five minutes, I have to sit down and watch the whole episode. I’m such a lover of that relationship between David Jason and Nicholas Lyndhurst, I think it’s absolute gold, all of those characters, John Sullivan’s writing, it’s part of my fabric growing up. It’s probably my favourite ever TV show.

Name an iconic TV moment for your generation

The opening ceremony of the London 2012 Olympics was an amazing moment of television isn’t it? It started out in like a farmyard [laughs] and I remember thinking, ‘what have we got going on here? We’ve got the eyes of the world watching us…!’ But it then proceeded to be the most engaging and emotional extravaganza. In terms of Olympics opening ceremonies, nothing comes close to that, even in Beijing when you had that huge number of people. It was so brilliantly British. I don’t know why I ever doubted Danny Boyle. He hit it out of the park.

What was the last TV show you recommended to someone?

I recommended Save Me, the Lennie James show. I watched the second series of that in lockdown and the second series was even better than the first, and I absolutely adored the first series. I thought that was an absolute breath of fresh air, I think it was really amazing that Lennie had written this piece set on a sink estate and yet it felt vibrant and I loved the characters. It was just a wonderful piece of television. They’ve got to do another series. I definitely recommend that.

Yes! He pops up absolutely everywhere doesn’t he?

Which TV show does everybody keep nagging you to watch that you haven’t yet seen?

Ozark and Succession. They’re two shows I’m yet to delve into really. They’re two on my list I’ve got to tick off, along with everything else!

Which TV show would you like to bring back from the dead?

There’s all this talk that there’s going to be a final instalment of Life on Mars and Ashes to Ashes, which I keep hearing rumours about. From what I’ve read, it’s more based around what happens to John Simm’s character Sam Tyler. I don’t know if it’s going to be a modern-day thing but I always wanted to see Gene Hunt in the 90s. It’s difficult to make that happen because Ashes to Ashes was sewn up brilliantly. I’m sort of hesitant to say it should come back but Gene Hunt is such an iconic character and Phil Glenister was so incredible in that role.

I’ve always gone on record and said that Jim Keats – the character I played, the devil – was one of the most enjoyable things I’ve ever done so if there’s an opportunity to play that role again, I’d jump at that. Is it egotistical of me to pick a show that I’ve been in myself?!

Which show do you wish more people would watch? If you were forced to pick another one of yours?

I did a single drama on BBC Two called Mother’s Day about the Warrington bombing. That’s a really important moment in history and it’s such a heart-felt drama. If anyone’s not seen it, that would be something I would recommend to people to watch. It’s not for the faint-hearted.

Have you ever done fancy dress as a TV character?

Tell me you were the Frank Butcher with the spinning bow-tie?!

[Laughs] I didn’t go that far! Actually, scrap the Olympics opening ceremony, do the Frank Butcher bow-tie as the most iconic moment of my generation [laughs].

Which TV theme song do you know all the words to?

I know all the words to Friends and I have to say, Only Fools and Horses again, whenever that comes on I always end up singing all over it.

Which TV character would you like to beat in a fight?

What’s the TV show that The Rock does? It’s set in LA, Russell Brand’s been in it as well. I wouldn’t mind beating up the Rock, because my wife loves a bit of the Rock! So I could beat him up in a TV drama. Who wouldn’t want to beat The Rock up?!

What is the most fun you’ve had making television?

White Lines for Netflix, without a shadow of a doubt. That’s a complete no-brainer. The locations, the character I was playing, the actors I was working with and the scripts were just absolutely brilliant and bonkers. Fingers crossed we get a second series.

If you get a second series, your character Marcus has quite a different role set out for him, doesn’t he?

Yeah! He’s going to become the drug baron of the Calafat family. It’s all to play for isn’t it, especially for Marcus, the whole thing’s been left wide open for him to get into all sorts of mishaps and scrapes.

That character was probably the most enjoyable character I’ve played, him and Jim Keats. I just had such a ball, he was so funny and he had this sort of tragedy to him as well. He’s just so hapless. The thought of Marcus in Colombia or Bolivia or wherever just makes me howl even thinking about it.

And when else do you get to give mouth-to-mouth resuscitation to a dog?

That’s true! I forgot I did that scene. That’s mad isn’t it. Though I actually only punched the dog’s chest. At one point I did say ‘Shall I give the dog actual mouth-to-mouth?’ and the director Nick Hamm said ‘I think that’s too much Danny, even for this show.’