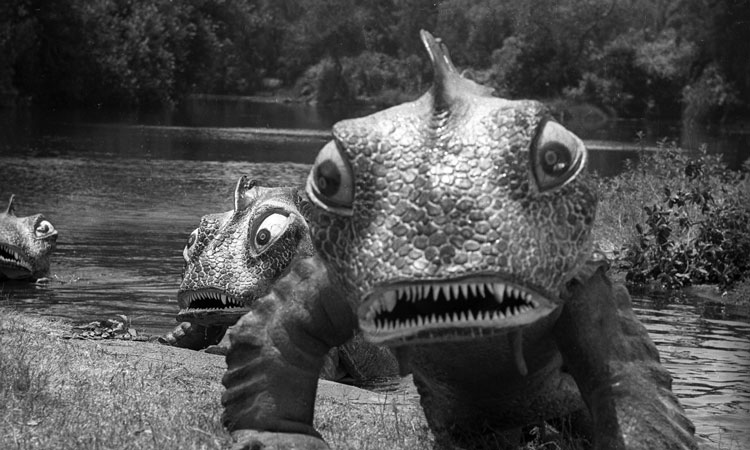 Where did your interest in The Outer Limits begin?

I was there day-and-date for the network premiere in 1963, which should give you an idea of how ancient I am. In those days, you would get a summer rerun of selected episodes, and then if the show was lucky or worthy, it would get picked up for syndication airings. The Outer Limits was perpetually in syndication from the moment of its network cancellation, yet in general was much harder to revisit than, say, The Twilight Zone, which was globally popular. So for me it became akin to a collector involved in a treasure hunt ― to find the grail episodes, experience them once more, and find some way to ‘permanentise’ them in the days before home television recording devices were popular or affordable. Sometimes you pick your favorite shows, and sometimes they pick you. I grew up with The Outer Limits and in many ways it is responsible for me becoming a writer, for life.

Why do you think the popularity of The Outer Limits has endured for so long?

The Outer Limits was a perfect storm of talent and timing, right before cinema values completed their transition from the big screen to the small, home screen. The episodes look shot like feature films. The music is sumptuous because the orchestra was big. You have to remember that much mainstream TV was consumed on The Beverly Hillbillies level. The classic drama anthology shows were waning. And here was this complete oddball, unlike any series ever seen by TV viewers. If it didn’t arrest your attention with the stories, then the visuals might nail you. Or the acting talent. Or the writing. Or the monsters. Or the special effects, barely precedented for the time. Or the simple outrageousness of it all. It truly encompassed the real definition of ‘fantasy,’ which is ‘the free reign of the imagination’.

With the recent version of The Twilight Zone and even considering The Outer Limits’ Nineties show – is there a place for a modernised version of the show today?

I think you would have to have similar intellects creating the show. The various reboots have demonstrated that you can mimic the furniture of something without necessarily recreating it. And so may modern film and TV efforts were at least inspired by The Outer Limits.

That said, I believe The Outer Limits at its best was a product of its time – and tougher to recreate today, especially if you’re not aiming for nostalgia.

There are some comparisons between The Outer Limits and The Twilight Zone – what, in your own words, are the fundamental differences between the two shows?

This is a perennially popular comparison with a really simple answer. The Twilight Zone, as Richard Matheson said, was most often about “ordinary people in extraordinary circumstances.” The Outer Limits, if anything, was most often the polar opposite of that sentiment ― many of its characters were obsessed seekers and mad dreamers in remote labs and Old Dark Houses, besieged by the intrusion of the ordinary.

Anthology series are having something of a resurgence with the likes of Black Mirror, what, in your opinion, is the appeal of an anthology series?

I love Black Mirror unreservedly. As a kind of around-the-corner way of answering your earlier question, Black Mirror is very much what The Twilight Zone would look like if done today, but much more science-fictional. It is strictly about the societal impact of technological changes.

When it comes to tales of the fantastic, be they horror or science fiction or both, the short story is still the best means of fictionally expressing the emotion of the piece. That goes all the way back to Edgar Allan Poe, the ‘single effect’ he aimed at for each story. The unsettlement, the dread, the fear and wonder. And anthologies of stories remain the best for their varied palette ― a new flavor each episode.

Do you have a particular order you recommend watching The Outer Limits in?

Like nearly all TV shows, the usual sequence of The Outer Limits episodes reflected its original broadcast order. That’s the order in which they are presented on the discs. But as I delved into the series, year after year, I repeatedly noticed that it was more instructive and illuminating to watch the episodes in the order that they were made, because then you could get a clearer picture of the ebb and flow of the entire series as it was produced, the peaks and valleys, if you will. In the Viavision booklet, I talk about the episodes in the order in which they were produced, if you’re interested. For me, chronology always wins.

Do you have a particular favourite episode of The Outer Limits?

I can’t really claim a favourite, because – further to the above – I spent a great deal of time researching and ‘living with’ each and every episode. Even the worst have something to love. Here’s a hint, though: If you want to know the episodes to which I became the most devoted, just check to see which ones I did audio commentaries for. That’s not a be-all, end-all… but it’s a good start!

Do you have your own particular favourite special effect or character?

The first time you see the car disintegrate in ‘The Architects Of Fear’ packs a wallop even today. The shot of the soldier falling down the stairs covered in antlike alien bad guys in ‘The Zanti Misfits’. ‘The Galaxy Being’ talking about death and religion – and he’s both a character and a special effect. I’m quite fond of the devilish Ebonites in ‘Nightmare’, and bug-eyed Reese Fowler in ‘The Mutant’. The warm humanism of the aliens in ‘The Bellero Shield’ and ‘The Chameleon’. The totally-berserk-looking Chromoite in ‘The Mice’. And take one more look at the Thetan in ‘Architects’ ― how elaborate and complicated that getup is, all for about 90 seconds in one episode, and most aliens in most science fiction movies up to that point hadn’t been half as complex.

Do you have an episode that you would recommend to first-time viewers of The Outer Limits?

Overall, ‘The Sixth Finger’ is a very good test dive. It features all the elements that made The Outer Limits memorable in a very compact package ― a literate and sensitive script, top-notch acting from David McCallum and Edward Mulhare, a bald-faced dare to network censors on the topic of evolution, and a director totally en pointe with the material, James Goldstone.

The Outer Limits has themes that have resonated with audiences for generations. In your opinion what is it about sci-fi that makes a good platform for discussing contemporary themes?

It’s the ‘what-if’ that has always been the anchor of all good speculative fiction. Good sci-fi, fantasy or horror is almost never about characters making the safe choice; it’s more often about the consequences of taking a risk … and not constantly punishing characters for violating the will of some deity.

When Leslie Stevens conceived The Outer Limits he wanted a forward-thinking, outward-looking showcase for bizarre ideas, to deal with explorers and seekers at their best. Those themes aren’t just contemporary, they’re eternal, and if the dramas we watch are any good ― executed with any measure of skill or humanity, mad scientist innovation or on-the-spot creativity ― then those are the shows we’ll keep coming back to over the years.

The Outer Limits: The Complete Original Series Blu-ray box-set is out now from Viavision.