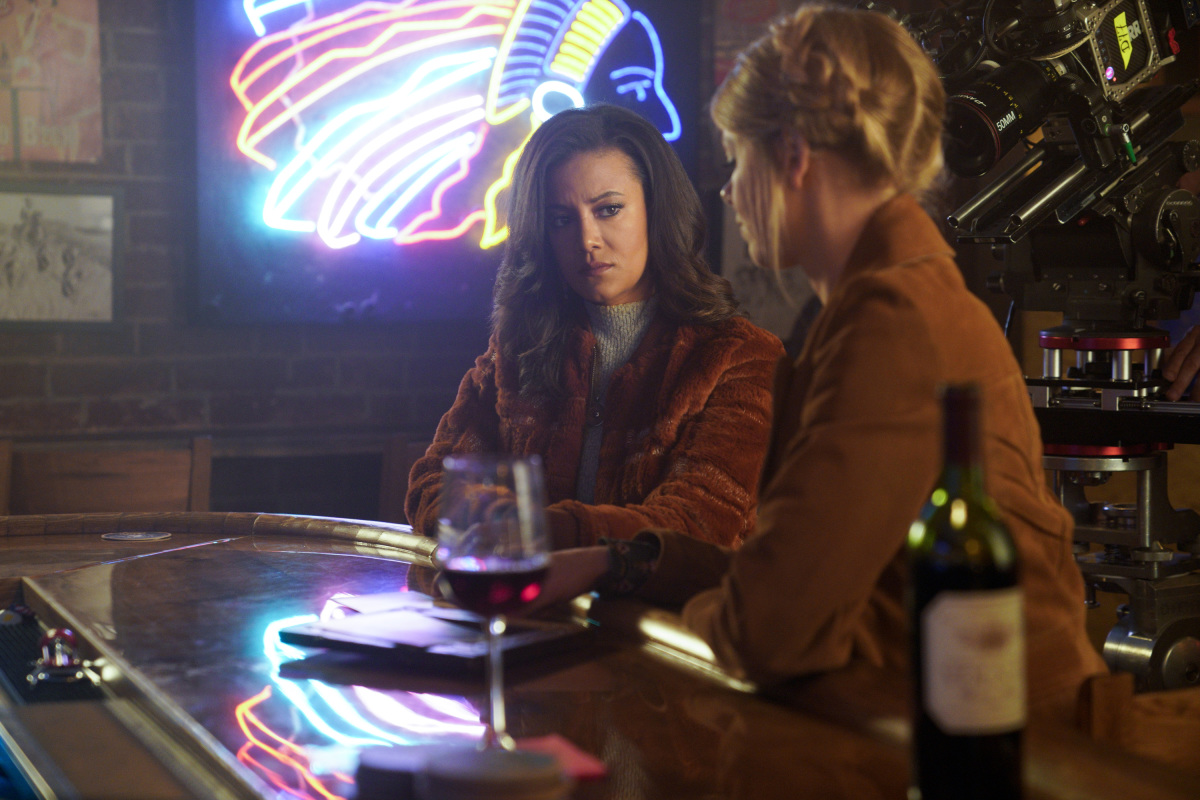 Penultimate episodes are often more intense than season finales, and that may well hold true for Roswell here. Even if the conclusion continues to knock our socks off, there’s no denying that this was an intense hour of television. It feels like everything happened all at once, as the pod squad and friends raced to foil dueling plots of varying degrees of villainy.

There’s a lot going on here, but Max and Liz are having some issues with trust and secrets. Cam referring to that serum as “alien steroids” has me thinking Max’s overuse played a part in his choice to kill Flint. At the beginning of the episode, Max assumed Liz would finish her research, in another example of the two of them talking past one another. After such a great episode (and explanation to him!) of what her scientific exploration means to her, it’s hard to see him belittle it, even if I get where he’s coming from. Get it together you crazy kids!

If I have one criticism, it’s that this episode had so many moving pieces, from a plot perspective, that it became a bit hard to keep track of the various hazards and who they put at risk. It didn’t help that two of the devices are intentionally identical. Stranger still, in spite of the episode’s frenetic pace (which otherwise worked, outside of the frequent need to rewind and check my notes), there was an odd lull in the middle of the episode when the gang thought they had resolved the problem but hadn’t, and took precious beats before Liz came up with a ham-fisted way to figure out it wasn’t over yet.

We also could’ve used a more pointed recap of who exactly is working with some form of alien DNA or protein and/or is related to one another at this point, and how certain the gang is that it’s a factor. Are we meant to be confused as to whether Rosa and Maria are on the chopping block? Who in our crew is even eligible to go to Crash Con relatively unscathed – Kyle Valenti, the one guy who’s MIA?

It almost feels like this episode lost a team meeting scene either in drafting or in the edit. Can this Scooby Gang start acting like an actual cohesive group already? How has Isobel not put them all on a group text for occasions such as the kidnapping of multiple members? It’s easy to imagine a cleaner version of the same episode where they work together more. Everyone still ends up pulled back toward Crash Con, but the stakes each time are clearer for the audience, as well as the trade-offs every time somebody takes another person’s place, meaningful character moments that got lost in the shuffle.

Something else that got a bit lost in the shuffle was the emotional weight of Helena’s heel…re-turn? Having her just be a run of the mill crappy mom who stumbled into the alien stuff feels more in keeping with the heartbeat of the show. Jesse Manes is evil enough for everyone’s parents. Mimi and Helena’s moments together were nice, and a good reminder that they would, indeed, have known one another, and apparently were friends.

Hopefully next episode will give Helena and her daughters some time together, especially since we now know that she’s known about Rosa this whole time. Can you imagine the pain of knowing your daughter came back to life and not being able to be with her? We need to see more of that journey on screen. As a side note, I appreciate that Roswell tagged up on the camera work back at the beginning of the season that suggested the Ortecho girls were being watched.

This episode sped by, and now Charlie is handcuffed in a burning house, Greggory “the only other one we like” Manes just put himself between Jesse (with a gun drawn) and Michael, and a whole bunch of Manes men are standing around while an anti-Manes weapon is still in play. Meanwhile, Max needs CPR, Rosa is stressed out and trying to keep the guy who saved her life alive, and Flint is maybe dead which is frankly more trouble for everyone than he’s worth. Liz and Isobel are going to try to use science and alien powers to prevent a highly flammable fair from blowing up, that alien console is still back stage, I guess civilians are still a thing because no one would listen to Michael, Maria’s eyes are bleeding in a becoming-her-mother kind of way, and frankly her weapons disposal protocol of “throw it wicked far” still makes me nervous. Buckle up gay space cowboys, on to the finale!