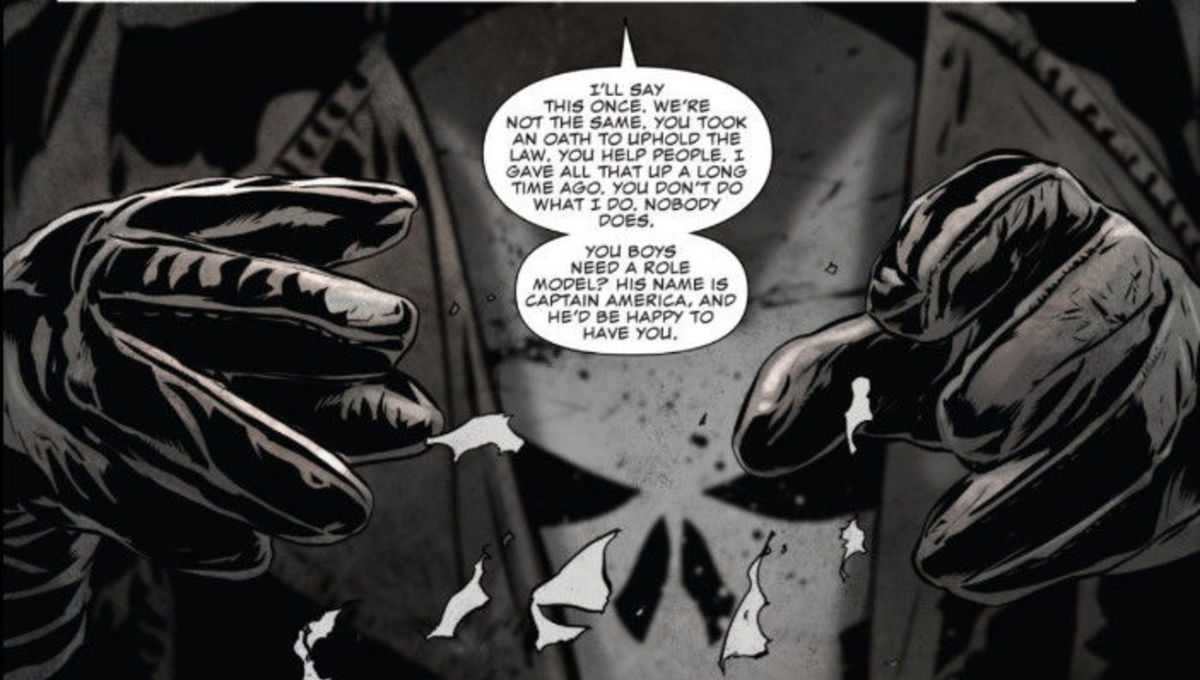 As protests against police brutality go global and enter their third week, Marvel Comics has faced increasing calls to get the Punisher skull off of police gear. The skull is often added to bootleg tactical merchandise used by police and the military (both at home and abroad), as well as, occasionally, official police gear. When pressed on the matter, though, a Marvel spokesperson told io9 precisely nothing. The spokesperson affirmed to io9 that they were taking the issue very seriously, referred readers to a page from a recent issue of the Punisher’s comic, and pointed to the company’s prior statement on social media.

The Punisher was created by Gerry Conway, Ross Andru and John Romita, Sr. in the pages of Amazing Spider-Man. He is a former Marine sniper whose family is viciously murdered by the Mafia after witnessing a killing in Central Park, a man who is so completely failed by law enforcement and established power structures that he spends the next 40 years on one long fictional spree killing, targeting people he believes deserve it. Punisher’s co-creator, Conway, is apparently horrified by police use of the Punisher’s symbol, putting out a call on Twitter over the weekend for young comic artists of color to help “reclaim” the symbol.

Disney, Marvel’s parent company, is notoriously litigious enforcing its trademarks. Before purchasing Marvel Entertainment and all its comic characters, the company once sued three Florida daycare centers for painting likenesses of Mickey Mouse and other Disney characters on their walls. And Disney refused to grant permission for a child’s Spider-Man gravestone, telling his grieving father that they wanted to protect the “innocence” and “magic” of its characters. There are more than 1,000 results for “thin blue Punisher” gear on Amazon.

The page referenced in Marvel’s official response to media requests about their plans to enforce their own trademark is from 2019’s Punisher #13, by Matthew Rosenberg, Szymon Kudransky, Antonio Febela, and Corey Petit. On the page, the Punisher castigates a group of cops with his decal on their squad car, telling them if they want someone to look up to, they should talk to Captain America.

To Rosenberg’s credit, he’s been very vocal about his support of Black Lives Matter and various groups doing work with marginalized populations on Twitter, but this page bears more than a passing resemblance to Charles Barkley’s “I am not a role model” commercial: a valuable, thought provoking statement exasperated with mass media culture, amplified into that very culture by a corporation looking to make a buck – in Barkley’s case, Nike selling shoes, and in Marvel’s, ducking responsibility for the consequences of their character’s portrayal among a group of dedicated point-missers.

As of this writing, there are more than 2,000 results for “trump punisher” on Amazon, many of them shirts with President Trump’s signature hair piece over the Punisher logo. These shirts are the Thin Blue Punisher shirts for people who believe a pizza place without a basement was hiding a child sex trafficking ring in its basement.

Presumably this lax enforcement by Disney will go both ways. So if an enterprising young protester were to create a shirt with “ANTIFA” on the front, only the first A was the Avengers logo, they could sell that and raise a substantial amount of money for bail funds and Black Lives Matter-affiliated charities, and Disney would extend the same generous blind eye.

For more on Disney trademark enforcement actions, or for where you can buy Avengers Antifa shirts, stick with Den of Geek!