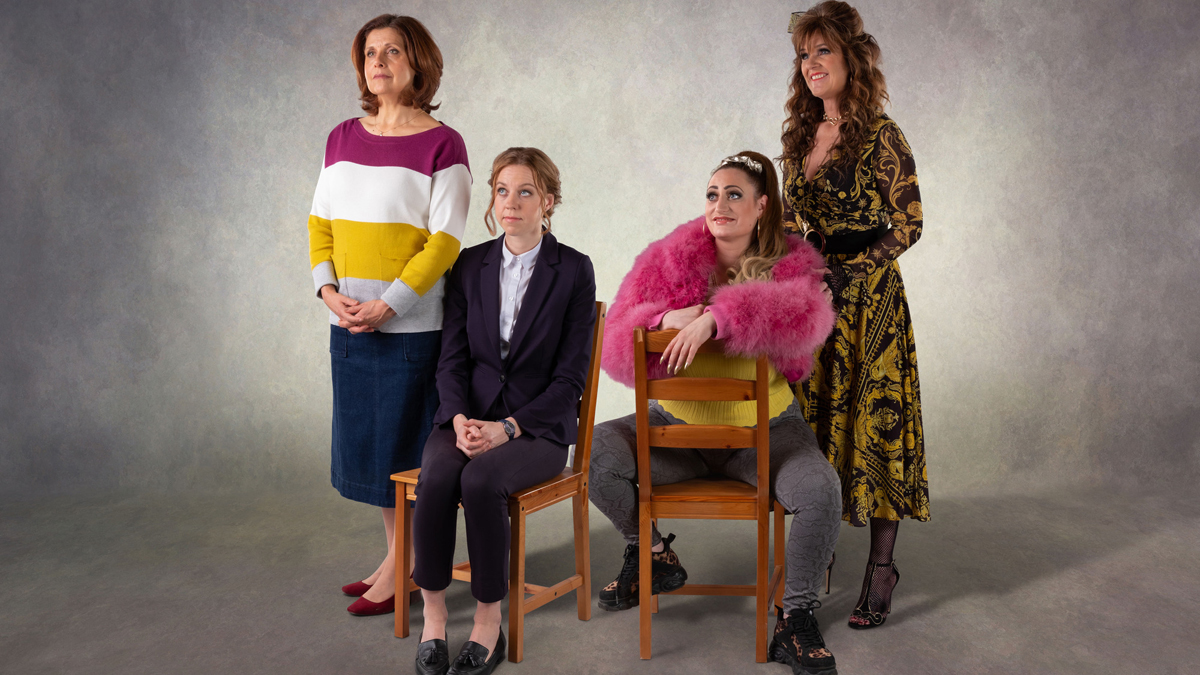 “I’ve got another family in Telford that I’ve never spoken about,” announces comedian and writer Holly Walsh on a Zoom press call. “Luckily, by writing this, it’s tax deductible.”

She’s joking of course. Since writing a sitcom pilot about two step-sisters who only discover each other’s existence after their dad’s death, Walsh keeps being asked if the premise is autobiographical. It isn’t, but The Other One is inspired by a true story she heard about a man with two families who gave his kids the same name to avoid confusion or being sprung. “I thought that’s such a brilliant story.”

Walsh and her writing partner Pippa Brown turned it into a six-episode sitcom about uptight, high-achieving Cathy (The Windsors and Ellie & Natasia‘s Ellie White) and freewheeling, fun-seeking Cat (Catastrophe and Misfits’ Lauren Socha). Half-sisters just five days apart in age, they meet for the first time at their dad Colin’s funeral, and quickly find a place in each other’s heart.

“It just became this love story really, between the two Catherines,” says Walsh. “I wasn’t that bothered by the dad. A lot of shows have been written about complicated men with difficult lives and I’m more interested in the people who are surrounding that, the people left behind.”

Two of the people left behind are Tess, the deceased’s legitimate wife who had no idea her husband spent every Tuesday evening with his other family, and Marilyn, the mistress who knew all about Tess but worshipped the ground Colin walked on nonetheless. The Thick of It and Nighty Night’s Rebecca Front plays Tess, with Happy Valley and The Stranger’s Siobhan Finneran as Marilyn – totally justifying Walsh’s description of the comedy ensemble as “a power cast.”

Front describes Tess as “a very tightly wound woman” and “the root of all Cathy’s uptightness.” When Tess discovers her husband’s decades-long infidelity, she “does not deal with it well,” says Front. “She’s an emotional mess, but she thinks she’s holding it all together.”

In contrast to Tess, says Finneran, Marilyn is “a very, very open human being.” Marilyn’s extreme openness makes her a comical oversharer. The details of her full and frequent love life with Colin are regularly reminisced over in the presence of his daughters – prompting smiles from the similarly filter-free Cat, and horror from Cathy.

A favourite moment in filming, says Ellie White, was a scene in which Cathy and Marilyn lie together on a bed. “I did very much enjoy laying with my… mother-in-law?” White asks for clarification on how Cathy and Marilyn are related. “Step-mum?” offers Walsh. “Laying with her on her bed and looking up at ourselves in her sex mirror,” smiles White.

“That was a highlight,” agrees Finneran.

Other filming highlights include a close harmony rendition of The Archers theme song performed by Front and Amit Shah (who plays Cathy’s similarly straitlaced fiancé Marcus), a comically over-white tooth veneer, an awkward car seat fumble that Front’s character enjoys with guest-star Neil Pearson, and the recurring guest role of Tess’ sister, played by Caroline Quentin. “I should have been her child,” says an awed Lauren Socha. “Growing up and seeing her on the telly like all of my life, and then actually being next to her was a bit surreal. She was mint, wicked, proper.”

Cat shares the same enthusiasm for Cathy in the show. “They are the complete opposite, yet they love each other so much,” says Socha. “If it was real life I’d feel quite jealous and quite resentful of my sister,” especially as Cathy enjoyed the pony and private school privilege of being their dad’s legitimate child. “But there’s more admiring going on than anything,” Socha explains, describing her character as having no filter and a heart of gold.

White agrees, describing Cathy as neurotic and “one of those people who really struggles letting people into her life. When she suddenly discovers Cat is her sister, “she doesn’t know what to do because [Cat] is so warm and so in-her-face and entirely lovely to her and so kind and opens up a completely different side to her.”

Since the pilot went out in 2017, Walsh has been inundated with real-life accounts of people who’ve made similarly life-changing discoveries.

A secret family situation even got in the way of filming, says co-writer Pippa Brown. During the locations recce around Manchester and Bolton where the series was filmed, “one of the houses we looked at said it had happened to them, so it was too close to home and we couldn’t use their house.”

“The amount of people’, says Walsh, who’ve come up to me and gone ‘that happened to a mate’. It seems more common than you might think.’

The Other One starts on BBC One at 9pm on Friday the 5th of June.