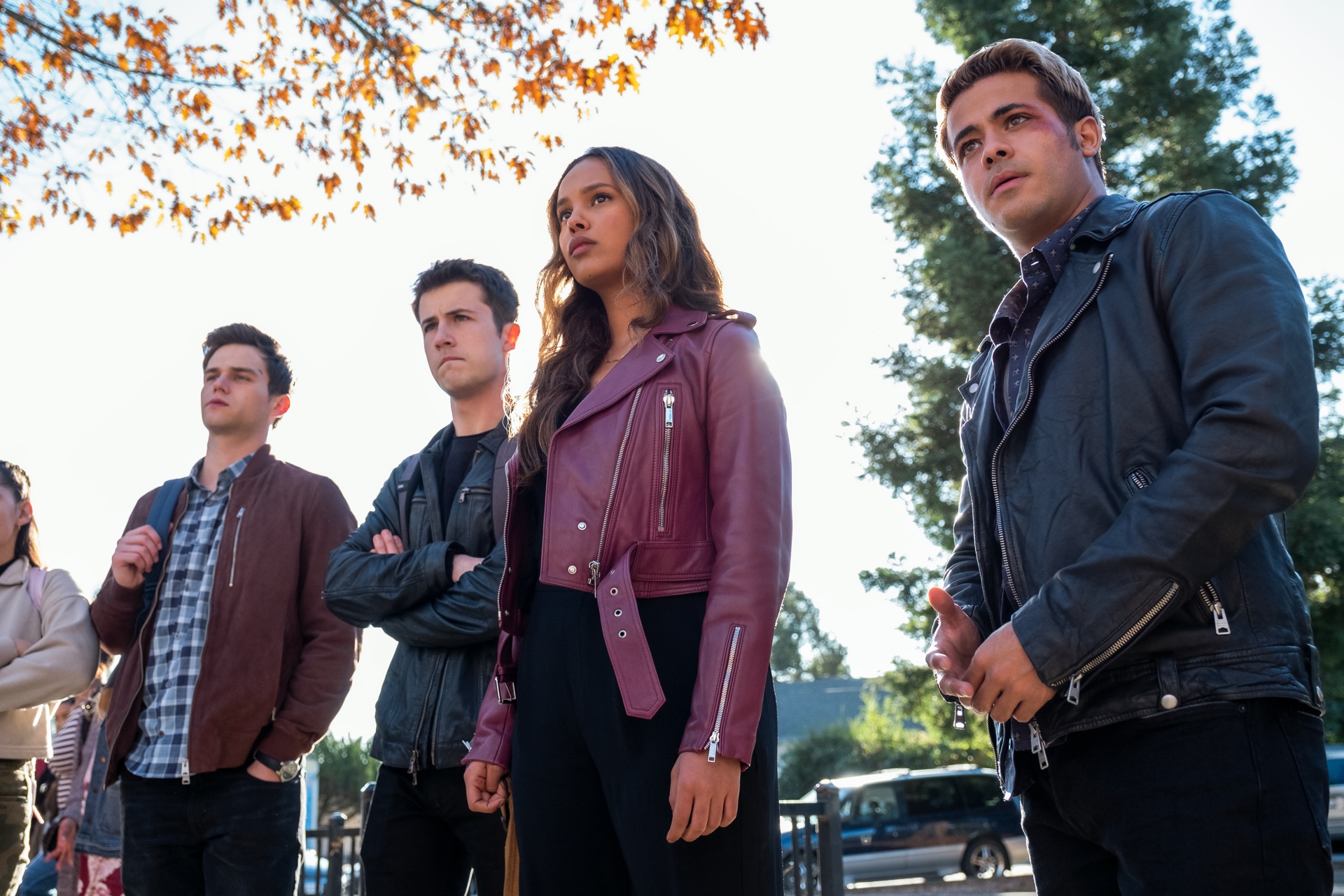 The following contains spoilers for 13 Reasons Why season 4.

Netflix’s controversial teen drama 13 Reasons Why finally wrapped up the stories of its outlandishly troubled youths this weekend with the fourth and final season. Spanning 10 episodes and a feature-length finale, it’s time for the Liberty High students to graduate and, as is a tradition for any show that gets to this point, there is enough death, mayhem and introspection to send the characters off into adulthood with their innocence firmly stripped away and their eyes fixed forward.

But what exactly did that entail? And is anyone left intact? We’re here to break it down.

Whose funeral has been teased?

Episodes of the fourth season were bookended not by the usual character voiceovers typical of seasons 1-3, but with yet another funeral for a mysterious member of the school community. While there might have been clues eager fans picked up on even before the series dropped, the answer wasn’t apparent until the penultimate episode’s final moments.

As some had predicted, Justin doesn’t make it out of the series alive. Moments into the final episode we’re told that he’s in intensive care following complications from HIV, which he contracted during his time on the streets between seasons 1-2, but which hadn’t been diagnosed. From the point of this reveal, there are no twists or reversals – Justin dies a slow, painful death as his friends and family mourn.

Where does that leave Jessica?

In a surprisingly good place, given everything. First thing’s first she tests negative for HIV along with Diego, who she slept with after reuniting with Justin at the end of season 2. He suggests he’d like to ask her out, albeit in a month when she’s had time to get over Justin (?), and she seems into the idea.

Speaking at the graduation ceremony, she seems full of hope for both her own future and the inevitable smashing of the patriarchy, but less fuelled by anger than we’re seen her. Love is her new mantra now because, at the end of the day, that’s all we have left. Judging by this and her final confrontation with Ghost Bryce, Jessica Davis will be just fine.

Was Winston able to uncover the truth?

Despite almost getting it right with his theory that Jessica killed Bryce, thus leading the group to frame Monty after his death in prison, it takes Alex actually confessing for him to cotton on to the whole story. After Justin’s funeral, Alex explains his reasons for doing what he did and that, along with his lingering feelings for Alex, seems to be enough to satisfy Winston.

It’s also heavily implied that the Sheriff is totally aware of the cover-up job done by Deputy Standall on behalf of his son, burying the case files in the basement after a rather pointed conversation. So after two seasons of dodging metaphorical bullets, Alex appears to have actually gotten away with murder. Yay?

Who actually gets to end up together?

With as much tragedy as the residents of this town have to endure, it’s a shock that anyone could forge a lasting relationship amidst the wreckage. But there are some happy endings, and they’re mostly saved for some of our most troubled characters.

Though Tyler took somewhat of a backseat this season compared to the previous one, we do see that his date with Estela has turned into an actual relationship and that she’ll be taking over HO in Jessica’s absence. Alex and Charlie’s romance is also going strong come series’ end, even winning them Prom King crowns. Tony and Caleb, who’ve enjoyed the steadiest relationship of anyone, will be doing the long-distance thing.

That’s a complicated question, and probably one only a qualified psychologist can answer. We’re certainly supposed to feel okay about the mental state of our protagonist by the end, but it’s hard to forget that he has been dissociating all season, as well as seeing ghosts of all of his dead friends. Then there’s also pretending to bring a gun to a police station which, as far as cries for help go, is not the smartest. But he’s in therapy, and gradually dealing with both his long-standing issues and his repressed grief over Jeff, Hannah and now Justin.

What about the other characters?

Despite Tony’s best efforts to self-sabotage all season, 13 Reasons Why ends with he and Clay quietly driving towards their new, young adult lives. And he didn’t even have to sell his father’s auto shop to do it – Caleb is now the owner, which means Tony can get himself a life far away from his past.

Zach, meanwhile, manages to pull himself out of his pity party just long enough to say goodbye to Justin, get a job at the school following a glowing recommendation from the coach, and get into college. Ani will also, of course, take her stunning GPA all the way to higher education, after reconciling with Clay.

Speaking of getting the hell out of town, we finally get to catch up with Ryan and Courtney, who have been missing since the second season. Turns out that they already graduated and seem to be living the type of fabulous post-high school lives our current graduates can aspire to. Ryan also celebrates his return by immediately hitting on Winston.

Any mention of Hannah?

It’s a question that’s been on fans’ minds since a fourth season was announced – will the show bring things full-circle for its final episodes, re-introducing Hannah Baker as the catalyst that started it all? Well, yes and no, as we only see her again at a distance via one of Clay’s classic ‘magic realism’ episodes.

He’s quickly interrupted by a Hannah lookalike (who also likes Alien Killer Robots!) who wants to take him for coffee to discuss their impending college lives at Brown, sending a clear message that, if Clay can move on, so can we. And so can the rest of the characters, who make a ceremony out of burying the original tapes together before looking out on the town that terrorised them for so many years. Even after everything, they have each other, and that turned out to be enough of a reason to keep going.