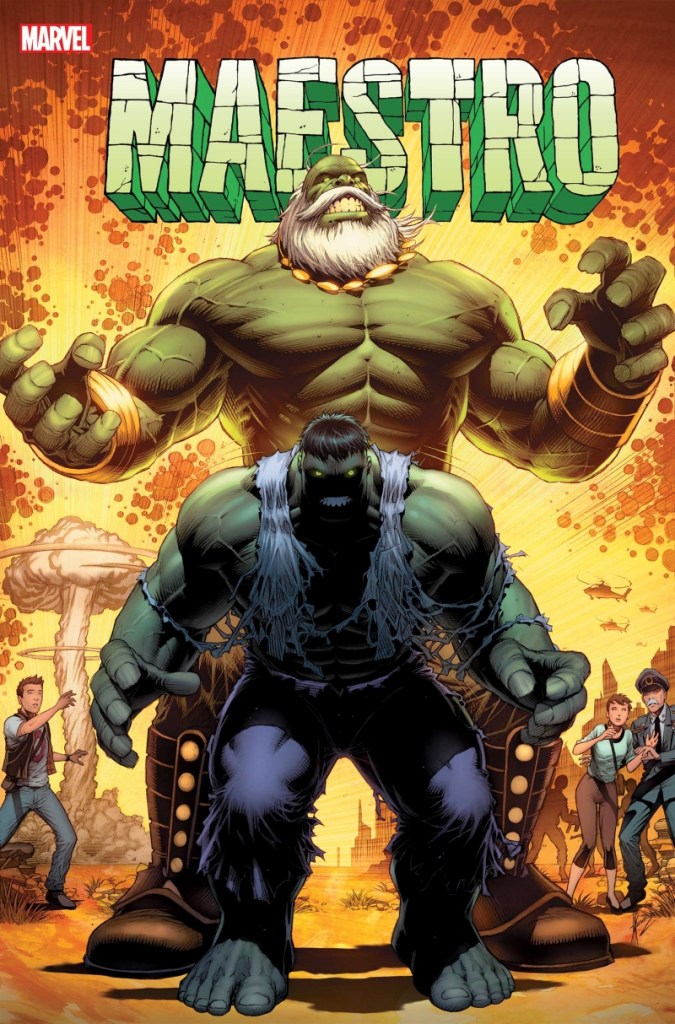 “I had no idea that when I first created the Maestro for Future Imperfect, that he would have the kind of popularity and staying power he has now,” Peter David said in a statement. “Until now, I’ve only been able to allude to his origins, so I was thrilled to have the opportunity to explore them in this series, and I can’t wait for fans to see all the artwork that’s been coming in!”

Future Imperfect was about the Professor Hulk persona (also with Banner’s intellect) being pulled into the future by rebels to defeat his evil future self. In the initial physical contest, he didn’t stand a chance, but he ultimately destroyed Maestro by sending him back in time to Hulk’s explosive origin at the bomb testing site. The gamma blast killed Maestro and he…proceeded to come back in really contrived ways that aren’t really all that memorable.

He still became a staple for alternate Marvel Earths and their futures. His canon self fought the Exiles prior to Future Imperfect‘s events. He was one of the bigger threats to God Doom’s reign in Secret Wars. A version of him appeared as an antagonist in the Contest of Champions series. A version of Maestro ended up in the Old Man Logan universe and got killed by the titular hero. One time the Avengers found a future where Maestro was a benevolent member of the team, but had a secret grudge against Bucky Barnes (which I don’t think was ever really explained).

More than anything else, Maestro exists as something for Banner and Hulk to fear becoming. Going on rampages is one thing, but to be a sadistic villain is too far for both the scientist and the brute. In Hulk: The End, even being the very last man on Earth, Banner still shaved regularly because he didn’t want to see Maestro staring back at him. When Hulk became the intelligent Dr. Green and was bent on curing all the gamma-powered supporting characters, he ultimately stopped because he realized he was going down Maestro’s path. There’s even a What If based on modern Banner evolving into Maestro instead of Professor Hulk and being so freaked out that he tricked the Thing into killing him.